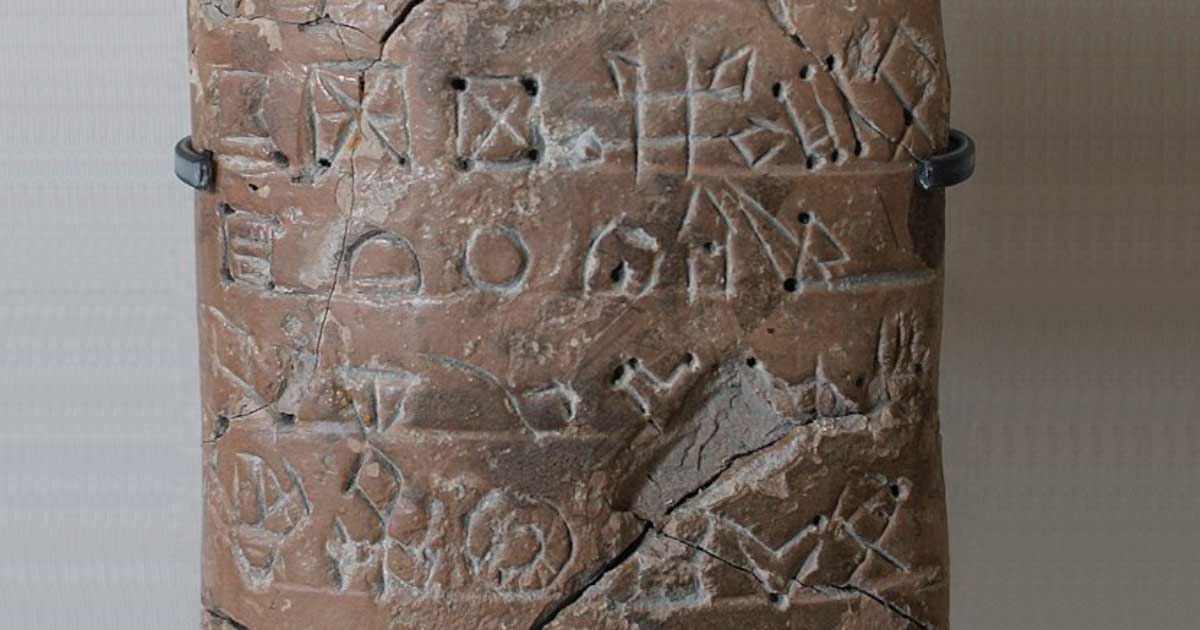 Linguistic experts have been trying to decipher and translate an enigmatic type of ancient language known as Linear Elamite for over 100 years. This writing system was used by people who lived in what is now southern Iran between 2300 and 1800 BC, and before its rediscovery in 1903 it had been completely lost to time.

In an article just published in the German journal Zeitschrift für Assyriologie und Vorderasiatische Archäologie (Journal of Assyriology and Near Eastern Archaeology), a team of scholars claim to have deciphered significant sections of the ancient language’s script from just 40 examples of Linear Elamite that have been recovered from various Iranian archaeological sites over the of the past 120 years. However, this announcement was met with a great deal of skepticism among scholars specializing in the field of decoding ancient languages.

It’s not often that an article published in a peer-reviewed journal sparks controversy. But at least for now, scholars who say they have decoded the true meaning of Elamite Linear script are not getting the reception they might have hoped or expected.

The first artifacts carved in Linear Elamite script were discovered during a 1903 excavation project at an ancient acropolis in Susa, Iran.

A group of French archaeologists found several tablets containing words or symbols written in an unknown ancient language. This previously undiscovered form of writing was believed to be related to another ancient language of the region known as Proto-Elamite, and hence the new script was called Linear Elamite. Later research suggested that there was only a slight connection between Proto-Elamite and the rediscovered language, but by then its name had become fixed and could not realistically be changed.

The meaning of the Elamite linear script is not a complete mystery. Over the years, other scholars have decoded a few bits of the existing Elamite Linear Inscriptions, and in fact the researchers responsible for the new study relied on these translations to guide them in their work.

To go beyond these partial and limited successes, the team of experts led by the French archaeologist François Desset, who currently teaches at the University of Tehran, analyzed eight well-preserved Elamite linear inscriptions found on goblets in silver, seeking to interpret their full meaning. They did this by comparing the ancient script with cuneiform texts that date from the same period and were written in a previously deciphered Middle Eastern script.

The cuneiform writings contained the names of the rulers, lists of their titles, and descriptions of what they accomplished. Scholars knew from previous decipherment results that the eight Linear Elamite scripts referred to some of the same rulers, and they hoped to further translate the Linear Elamite samples using the cuneiform texts as a template. In other words, since they knew what the cuneiform texts said in full, they could assume that the Elamite linear script would say much the same thing. 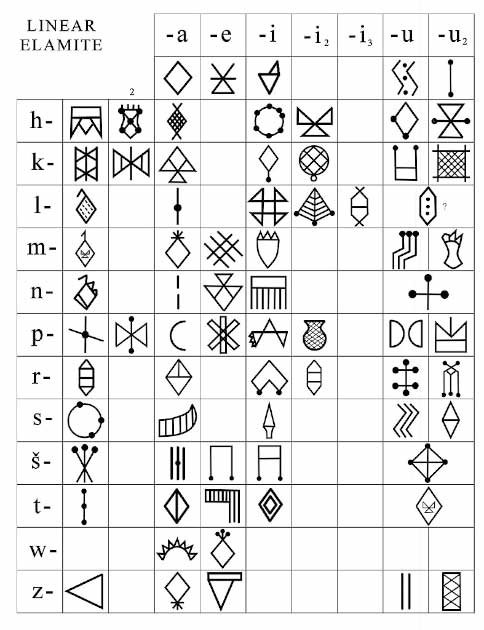 Thanks to this comparative methodology, Desset and his team claim to have discovered the true meaning of an impressive number of signs and symbols in the ancient language.

There are over 300 distinct Linear Elamite signs representing different vocal sounds, they wrote in their research paper, and they say that due to their study, only 3.7% of Linear Elamite symbols remain undeciphered.

The team plans to release more text translations in the future, but so far they have only released a portion of what they have been able to decipher. A short text they chose to publish says the following:

“Puzur-Sušinak, King of Awan, Insušinak [an ancient Iranian deity] loves him.” This stanza also states that anyone who refuses to accept Puzur-Sušinak’s authority must “be destroyed”.

The individual referenced here, also known as Puzur-Inshushinak, was the monarch of the ancient kingdom of Elam around the year 2100 BC. Elam was located in the western and southwestern parts of modern Iran, and the language known as Linear Elamite was apparently widely spoken in this kingdom. 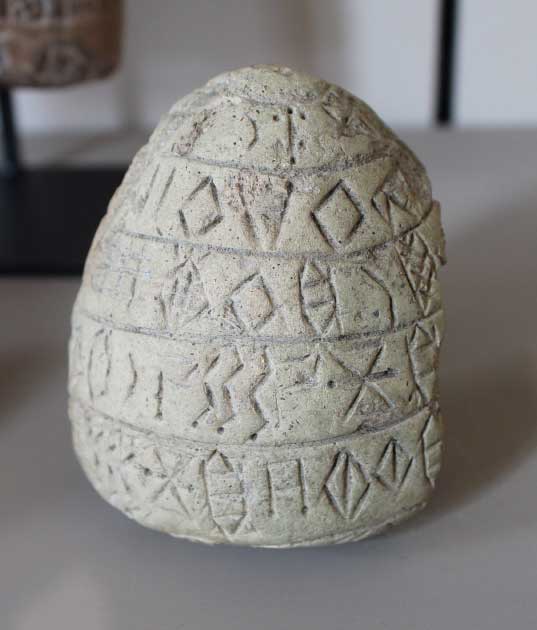 Clay cone covered with Elamite linear text, dated to the reign of Puzur-Inshushinak, King of Elam around 2100 BC. J.-C., which is part of the collection of the Louvre Museum. (Zunkir / CC BY-SA 4.0 )

The jury is still out

So why are the results of this decryption study met with skeptical response?

Some of the problems with this research were raised by Jacob Dahl, a professor of Assyriology at Oxford University, who was asked to comment on the claims of François Desset and his team.

Professor Dahl told Live Science that he disagreed with the new study’s claim that Linear Elamite and Proto-Elamite were in fact closely related, despite the current consensus that they are not closely related (Dahl worked with Proto-Elamite and is considered an expert on the subject). It’s unclear exactly how the researchers may have used the Proto-Elamite research to guide their inferences, but if they used it in any meaningful way, that could be a problem.

Dahl further questioned their judgment using the Elamite Linear Inscriptions found at the Iranian Bronze Age site of Konar Sandal as part of their analysis. Many scholars believe that these particular inscriptions are forgeries, and since Desset’s team relied to some degree on work done on them, it could have added a misleading or misleading element to their translation efforts.

Other concerns have also been raised regarding the eight scripts the researchers chose to translate. Seven were from the private collection of an individual named Houshang Mahboubian, who is the son of a famous Iranian archaeologist who is said to have unearthed the inscribed artifacts during excavations in the 1920s. Houshang Mahboubian has no actual documentation for the prove, and although attempts to authenticate these artifacts have found no signs of forgery, the lack of proof of their origin remains a legitimate concern.

The other artifact included in the study comes from the private collection of Norwegian businessman Martin Schøyen, who is currently trying to repossess the object from the Norwegian police. This inscribed silver goblet was seized by authorities in August 2021, based on a report from the Oslo Museum of Cultural History that suggests Schøyen may have acquired the object illegally on the antique black market .

Adding another layer of confusion and uncertainty to this story is the behavior of Francois Desset, who has been identified as the lead author of the new study. Despite the designation, he has so far refused to comment to the media on either his team’s claims or the doubts raised by critics. It’s a notable change, as Desset has shown a willingness to talk about his ongoing research in the past.

The new study may in fact represent a big leap forward in understanding the ancient Linear Elamite language. But more research will be needed to confirm its findings, and until it is forthcoming, the skepticism is unlikely to subside.

Top image: This clay tablet, part of the Louvre Museum collection, covered in an ancient language is actually one of the few known Linear Elamite texts, which a research team has claimed to have deciphered almost entirely. Source: Zunkir / CC BY-SA 4.0

2022-09-02
Previous Post: Biden speaks at Independence Hall in Philadelphia. Here is his story.
Next Post: Is History Channel returning with The Curse of Oak Island season 10?