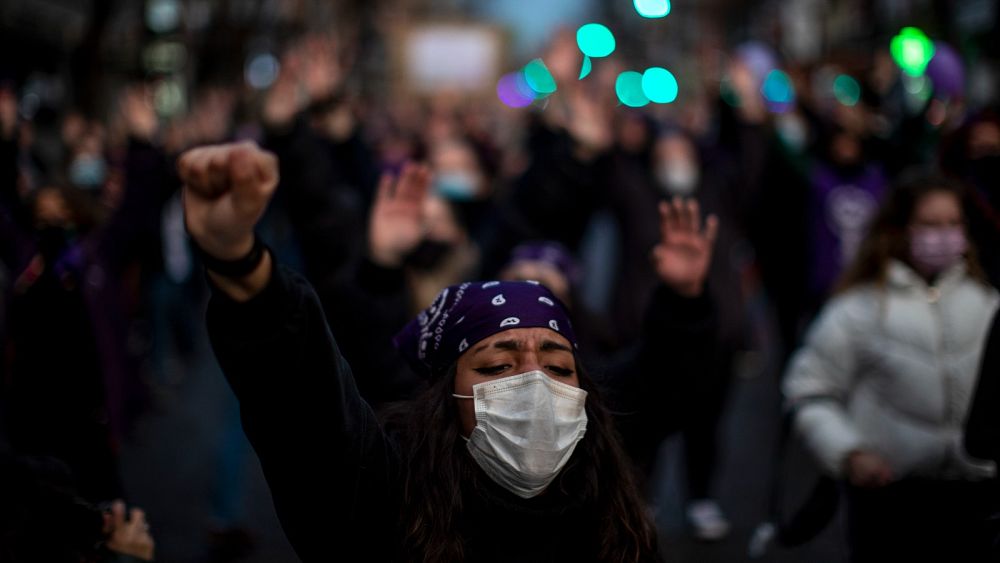 A European approach to gender-based violence is taking shape, but gaps remain

On New Year’s Day this year, three women were found dead in different parts of France. All had been killed within the previous 24 hours by their partners.

The brutal killings sparked a wave of protests and outcry that in 2022, in one of the world’s wealthiest countries, the government had failed to tackle femicide.

Femicide is the word given to the violent killing of women and girls because of their gender.

The term was coined in 1976 by feminist Diana EH Russell and was formally defined by the United Nations in the 2012 Vienna Declaration.

The challenge for organizations fighting femicide is to get states and police forces to recognize it and take action to prosecute offenders and prevent these crimes.

“The impact of femicide is far greater than that of homicide, because often we have children who are suddenly orphaned, and we have a family that suddenly has to take care of two or more people,” said Christina Fabre of the European Institute for Gender Equality (EIGE).

Children who have lost their mothers to femicide are more likely to have lifelong challenges, from education to health.

All of this comes at an additional cost to society and the economy – EIGE estimates that gender-based violence costs Europe around €366 billion every year and hopes that quantifying this impact will spur action.

“We decided to focus only on the most prevalent forms of violence against women. It was intimate partner violence, rape and femicide,” Fabre said.

The European institute worked to develop a common set of definitions and indicators that could be collected across Europe to give an accurate picture of gender-based violence.

In 2020 they recorded 444 cases of femicide across Europe – almost certainly an underestimate.

“Most Member States have had a lot of resistance to using the term [femicide]“, said Fabre.

A big part of their work on this is to convince Member States that the problem exists and can be identified.

In many cases where women are murdered, it’s difficult to prove that gender was a specific motivating factor for an attacker, Fabre says. Therefore, contextual factors such as how the body was found or the perpetrator’s criminal history may demonstrate his motivation for the murder.

In many cases, the legal process ends because the abuser committed suicide shortly after committing femicide.

“If we think femicide is just a crime, but we don’t analyze trends, and we don’t take into account the motivations behind these crimes, we will never prevent them,” Fabre said.

Even within the category of femicides, there are specific types of femicides that can and should be registered in order to respond better.

For example, while most states recognize and record murders involving intimate partner violence, there is not the same approach when sex work or trafficking is a factor.

Spain announced late last year that it would become the first EU member to register all femicides, including those where trafficking and exploitation were factors in killing.

This decision by the Spanish government followed a wave of protests against femicide after the murder of two girls by their father.

In Italy, the government passed a new law on gender-based violence in June, one of three since 2019, which included better recording of data.

Before the law came into force, the ministries of health, justice and interior were not obliged to collect data on gender-based violence, said Giusy Muratore, senior researcher at the National Institute Italian Statistics (ISTAT).

Muratore and her colleagues at ISTAT conducted a sample survey of 25,000 women on gender-based violence, as well as work with survivors of domestic violence.

This information is used both by NGOs to advocate and campaign against gender-based violence, and by parliamentarians to design policies.

“Women’s organizations and feminists have been working on this for decades, and the EU has been completely inactive,” said Malin Björk, MEP from the Swedish Left Party.

Efforts to get the EU to ratify the Istanbul Convention have already been thwarted by EU factions who want responsibility for tackling gender-based violence to remain at the state level, and by those who oppose the whole concept of gender-based violence, she explained.

While all EU Member States have signed the Convention, it has not been ratified by Bulgaria, Czechia, Hungary, Latvia, Lithuania and Slovakia. Poland also announced in 2020 that it would retire of the Convention.

“Parliament has asked for more resources to fight gender-based violence and more instruments,” she said.

These instruments could be action plans, recommendations or budgetary resources or legislative instruments.

However, this year, on International Women’s Day, the European Commission finally presented a new directive on gender-based violence.

The proposals include: better support for victims, safeguards and protection, as well as access to compensation, the fight against cyberviolence and better representation in the criminal justice system.

Björk and her colleagues in parliament are still in the initial stages of considering the bill, but she is cautiously positive, acknowledging that it is a “big step” but with shortcomings.

“I think we need more work on prevention. I’m the first to say that as long as justice works the way it does today, there will be no justice for women, because conviction rates are ridiculously low. But I also recognize that we don’t want to end up having casualties. So we need to put more effort into prevention,” she said.

For Björk, these prevention measures include: gender-neutral education, a feminist curriculum, the ability to leave abusive partners, and the provision of housing and childcare.

“As a feminist, I think it’s so basic. That living a life without violence is a basis for equality between women and men,” Björk said.