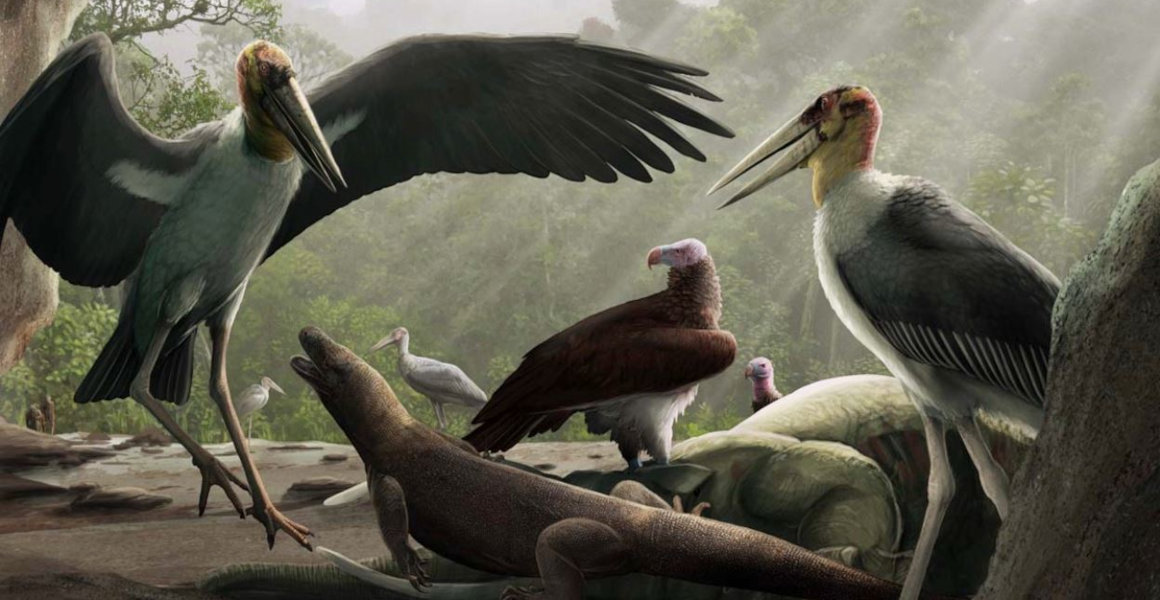 What do new discoveries tell us? Leptoptilos robustus?

When first described, only four bones of L. robustus have been discovered. It has been speculated based on its size that it could not have flown like other island-specific giant birds such as the moa and the elephant bird.

Newly excavated bones, including parts of the skull and wing, reveal the bird would likely have flown after all.

“We first assumed that it was a flight-limited bird that spends most of its life on the ground,” says Hanneke. “Our new research shows that was not the case, and it changed the way we view this animal.”

“He probably climbed to great heights using hot air currents in search of food, mainly Stegodon carcasses, and nestled in colonies in the tops of tall trees.’

The researchers suggest that these colonies may have been found around the Liang Bua site, where bones of adults and juveniles were found. Floodwaters from the nearby river are believed to have left standing water in the cave and provided drinking water for wildlife in the area.

This would have provided a useful ambush site for the Komodo dragon to attack its prey, which would have attracted scavengers such as L. robustus the site.

Using the new fossils, researchers hope to uncover the evolutionary history of the giant stork. The leg bones of L. robustus are very similar to L.falconerian extinct species known from Africa, Europe and Asia, which scientists believe may be the ancestor of storks in the region.

Finding out how giant storks evolved can also provide deeper insight into the island’s ecosystem during the Pleistocene.

“One of the main questions that remains is when the giant storks arrived in Flores, because so far we have only found bones from 50 to 70,000 years ago,” says Hanneke. “The similarities with the old L.falconerihowever, suggest they may have arrived in the area earlier.

‘Excavations in the So’a Basin in central Flores have yielded older bones of Stegodon and hominins between 700,000 and 800,000 years ago, so L. robustus may also have been part of this older ecosystem. We haven’t found any bones yet, but we’re looking for them.

With each evolution of the species, the arrival of Homo sapiens coincides with the extinction of the giant stork about 50,000 years ago.