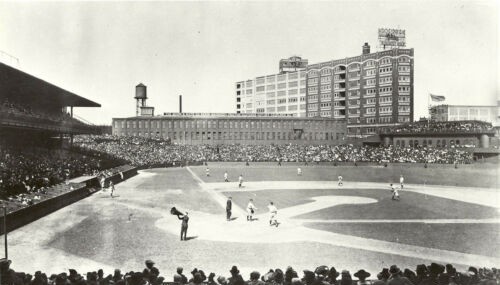 who preceded Dan Baker as the public announcer for the Phillies? Who was the first in the franchise?

Well, the answer to the first question is known.

Who was the first announcer is unknown.

We know one of the early voices of the AP is included in the photo above courtesy of historian Bob Warrington with Game 1 of the 1915 World Series between the Boston Red Sox and the Boston Red Sox. Phillies at the Baker Bowl in North Philadelphia.

The four men on the right are referees Bill Klem, Billy Evans, “Silk” O’Loughlin and “Cy” Rigle. On the left, holding a giant megaphone, is the PA announcer, known only by his surname “Black-smith.”

Pete Byron, who handled duties at Shibe Park/Connie Mack Stadium from 1951 to 1964, previously held the record for longest tenure. Byron was also well known as an announcer for boxing events in the city.

Before Byron, Dave “Zink” Zinkoff had the job in 1949. It is assumed that he was also there in 1950, but the search came up empty. It is not included in the 1950 Phillies Yearbook or the World Series schedule. Other searches, including obituaries, only mention that he was “the announcer for Phillies PA in the 1940s”. He became most famous as a spokesman for the Philadelphia Warriors and NBA 76ers from the 1950s to the early 1980s.

The following photo, provided by Rich Westcott, shows Zinkoff (standing, gray short shirt) next to the Phillies dugout in 1949. We assume “Zink” was there in 1950 but were unable to confirm this .

The photo also shows Andy Seminick who had hit a home run. This season was the last for the Phillies’ cream-colored uniforms. Thin red stripes replaced them in 1950.

Larry Shenk is the longtime official historian of the Philadelphia Phillies and brought his minor league report and other historical pieces to Phillies Nation as of 2019.