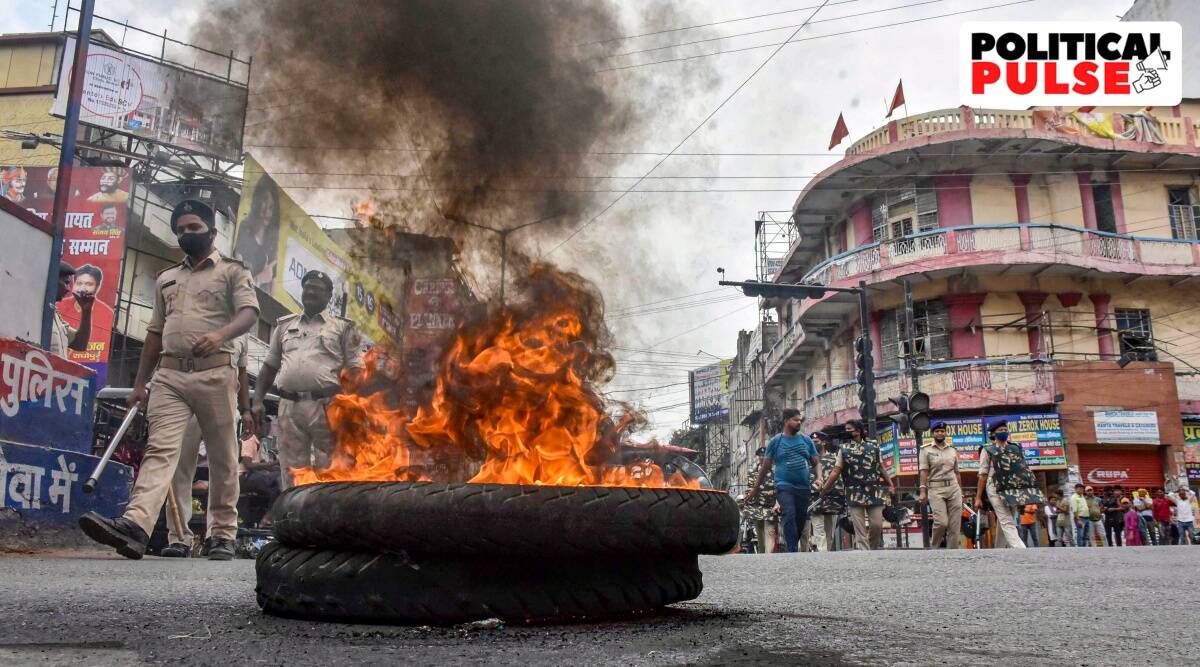 As protests against the Center’s Agnipath program swept the country, resulting in violence and chaos in some states, prompting several opposition parties to demand its rollback, a demand denied by the ruling BJP, reports and analysis of this whole story dominated news and opinion. pages of major Urdu newspapers in the country. As national politics heat up over the upcoming presidential election and Rahul Gandhi is questioned by the ED in a National Herald case amid congressional protests, their coverage has also been largely achieved by the daily newspapers, which shed light on the passing of Gopi Chand Narang, one of the giants of Urdu literature, at the age of 91.

In his June 18 editorial, titled “Agnipath tashaddud, kiya ab bhi bulldozer chalega? (Agnipath violence, will the bulldozer roll this time too?),” Hyderabad-based Siasat writes that nationwide youth protests against the Centre’s Agnipath program have led to widespread violence, to the destruction of public property and the burning of trains in several states, which caused losses amounting to hundreds of crores. “These protests mark the restlessness of the country’s unemployed youth as the Narendra Modi government gambles with their future by offering them short-term contract recruitment (into the armed forces),” it says. The ensuing violence, he says, prompted a question: “Will the government recover the damage done to public property as a result of these anti-Agnipath protests? He writes that in Uttar Pradesh, ruled by the BJP led by Yogi Adityanath, Muslims have paid the price for each of their protests over crucial issues. “They (Muslims) have been arrested and sent to jail on serious charges, notices have been issued to them to recover damages, bulldozers are used to raze their homes and shops… and virtually all BJP-ruled states have targeted minorities… Now that young people from all sections have taken to the streets to express their anger and frustration over unemployment and the use of violence, the question is whether similar advisories will be issued against thousands of these young people and will they also be subject to recovery procedures,” he says. Asking if the government will pay for the damages related to Agnipath’s unrest, the edition says: “If not, then it will have to answer how the same party could have double standards for different groups of protesters”, adding that the government should remember that a demonstration is the democratic right of every citizen reflecting the concerns of the public, although it must be held within legal and constitutional limits.

The June 14 daily, in an editorial titled “Tareekh badalne ki baatein (Talk about reversing history),” writes that the Modi government appears to be trying to change the country’s history. He says that during his first term the government had “targeted” universities, made changes to textbooks and “twisted and distorted” history in accordance with its ideological demands. “In the middle of its second term, this government, instead of focusing on efforts to spur development, strengthen the economy, create jobs, enhance the country’s global position and preserve its historical and cultural heritage, is talking again to overturn history. The Union home minister said that the history of the country has been written selectively and therefore a new history will be written. This is just to impose an ideology on the country. The trajectory of India’s history over thousands of years has periodically been marked by glorious milestones recognized across the globe.The country is dotted with monuments that showcase it. on a global stage, and yet the government is talking about changing this story which is incomprehensible,” he says. Of course, the edition says, the BJP and its affiliates have been in denial mode vis-à-vis the leaders. Muslims, who had played a key role, particularly the Mughals, in “writing India’s golden history”. “It is also written in history as to who had been at the forefront of the country’s freedom movement against the colonial Britons,” he says, asking the government to refrain from taking a sectarian approach towards history and instead “to take measures for the preservation of the country’s brilliant historical and cultural heritage”.

In its editorial tribute to Professor Gopi Chand Narang, titled “Narang: Ek Charagh aur bujha (Narang: one more light has gone out)”, the June 17 New Delhi edition of Inquilab writes that his disappearance occurred at a time when the alarming community situation in the country demanded that Urdu language and literature as well as our “Ganga-Jamuni tehzeeb (Hindu-Muslim syncretic culture)” continue to be guided by a towering writer and secular personality like Narang. His formidable literary and academic weight could be gauged from the point, he says, that no one dared to point fingers at him for receiving Pakistan’s “Sitara-i-Imtiyaz (Star of Excellence)” award besides to be conferred with the highest civil honors of India. like Padma Shri and Padma Bhushan. He points out that Narang has been a prominent ambassador of Urdu across the world for five decades. He quotes Narang saying that “one of the names of Urdu is also secularism… Urdu has given concrete examples in this respect for centuries and has kept a remarkable front against all kinds of narrow-mindedness. spirit and obscurantism”.

The daily affirms that everyone Urdu finds itself today orphan of the death of Narang. “It is a difficult time for Urdu language and literature that in a short span of time its leaders like Gulzar Dehelvi, Shamsur Rahman Faruqi, Shamim Hanfi and now Narang are gone,” he notes. Narang established himself as a literary theorist, scholar, and critic through four dozen books. He also wrote on complex topics related to linguistics, structuralism and stylistics, breaking them down for students of Urdu literature, he says, pointing out that “Notably, Urdu was not the native language of Narang, but the way he engaged with Urdu all his life made it feel like the two chose each other.”

The Kolkata edition of the June 15 Roznama Rashtriya Sahara, in an editorial “ED ki karwai Congress ke liye shar mein khair (ED’s action is a blessing in disguise for the Congress”, writes that the government has now ” released’ the Enforcement Directorate to pursue a 10-year-old complaint by BJP leader Subramanian Swamy that the ED subjected Rahul Gandhi to a marathon of interrogations in a National Herald money laundering case act of political vendetta, but it appears to have breathed new life into Congress as the ED action has awakened the dormant, shrunken party, whose leaders and workers have taken to the streets across the country to protest with members of the party’s front organizations,” the daily said, adding that several senior leaders even faced authoritarianism from the police while in detention in Delhi. It points out that following a series of voter debacles ales, including In the 2014 and 2019 Lok Sabha polls and numerous Assembly elections, analysts proclaimed the endgame of the Congress, saying the party, divided into factions, was deprived of its base of public support as well than his leadership, even as some political pundits invoked the BJP’s “Congress.” free India”. The ED action against Rahul, however, has galvanized Congress with even dissident G-23 leaders joining the street protests, according to the edition. “The ruling camp was of the view that bringing Sonia Gandhi and Rahul Gandhi before the EC for questioning would damage the image of Congress…but it appears to have given the party an opportunity to put aside its differences internal and move forward united. .”

The Mumbai-based Urdu Times on June 16 in an op-ed on “Sadr bane ga kaun (Who will become the president)” writes that as the 16th presidential poll scheduled for July 18 approaches, the leader of Congress of Trinamool, Mamata Banerjee took the lead of the opposition camp by organizing meetings with the leaders to decide on the name of their presidential candidate. Echoing the views of a large section of the opposition, she also urged her NCP counterpart, Sharad Pawar, to become their presidential candidate, which he said politely declined. “Although Pawar is a very suitable candidate for the presidential post but his decision is right as Maharashtra and NCP need his leadership. Keeping Maharashtra strong and free from hateful politics, keeping it on the path of development and progress, and ensuring a peaceful atmosphere are now his main priorities,” he writes, adding that as a political ace, “ Pawar could agree to become the First Ministerial Candidate but not Presidential Candidate”. “There hasn’t been a president since APJ Abdul Kalam who emerged from Rashtrapati Bhavan with only a few clothes and piles of books after stepping down from the highest office… The Muslim community should remember their contributions to the country. Deploying a bulldozer is easy, but the missile development was done by a Muslim scientist who became President of India. Will there be a president like him? asks the daily.