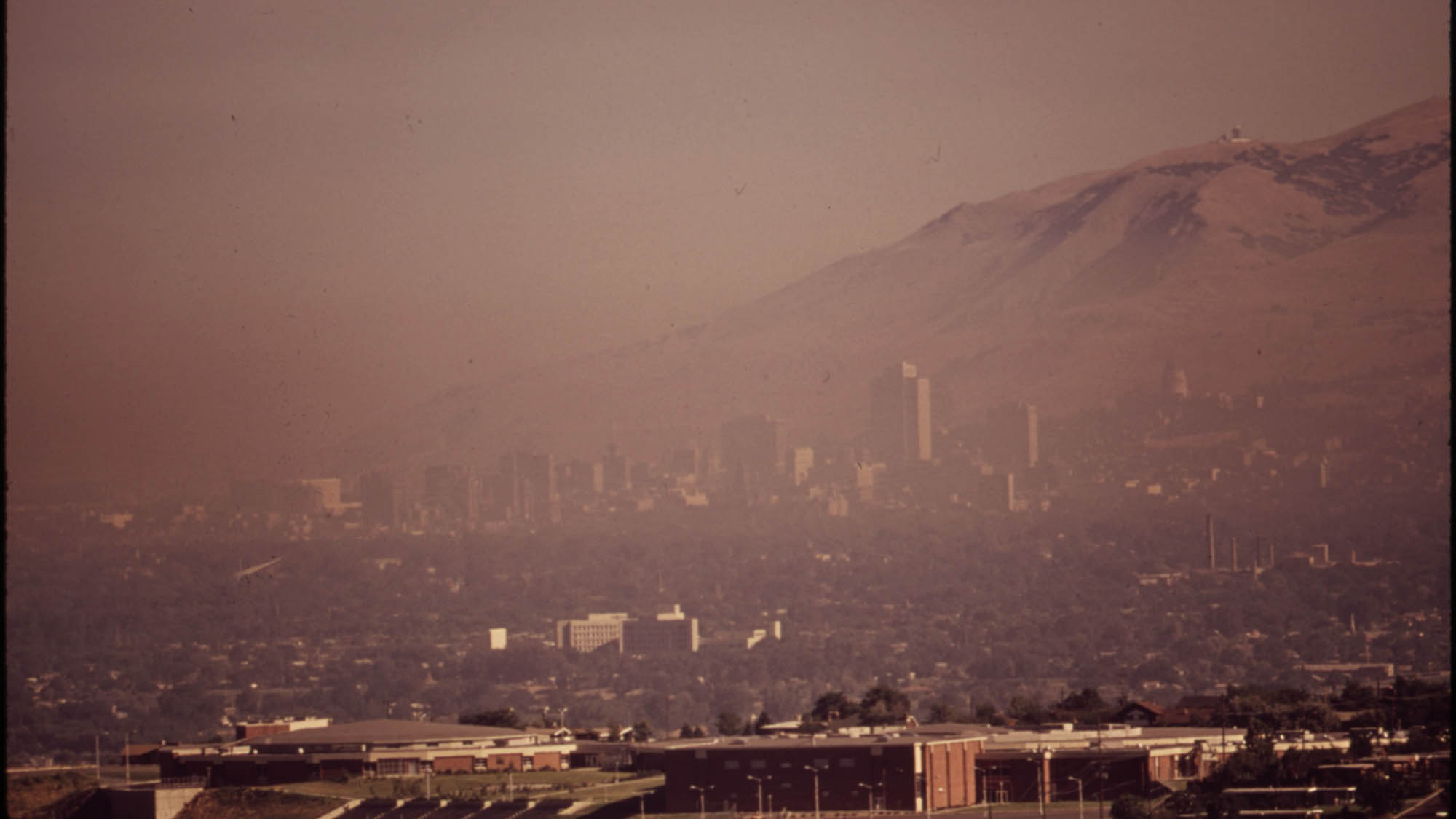 Air to Chew: The Story of Air Quality in Utah

When Salt Lake City official George Snow said the Wasatch Front’s air quality problems could not be solved “in a single day or a single year, not by a single group or group of people. . . it will take a well-guided, united, and continuous effort to fix the problem” – this was not in response to Utah’s torrential growth in recent years, nor to any of our recent inversions or smoke floods caused by climate-caused Western wildfires. This quote is from 1917 and predates almost everyone and everything that has grown up in the Salt Lake Valley since then.

This quote shows that Utah’s air quality issues have been with us for a long time.

New research from Logan Mitchell, an affiliate professor in the U Department of Atmospheric Sciences, and Chris Zajchowski, who earned a Ph.D. on parks, recreation, and tourism. at the U in 2018 and is now at Old Dominion University, traces the history of air quality in Utah since the mid-19th century.

“It’s pretty clear that our air quality today is probably better than it has been since about the 1880s,” Mitchell says. “We have been working on this for a long time, but we are at a time when we really have the opportunity to make a big difference. And it’s really exciting.

The research is published in the journal Sustainability.

Yes, the air in the Wasatch Front today is at times grimy, coarse, and can be dangerous. But modern air problems pale in comparison to the noxiousness that poured out of chimneys and chimneys a century ago, when coal and wood burning was common and widespread in homes and businesses.

Going back to the mid-1800s, early non-native explorers of the bowl-shaped valleys of the Wasatch Front noticed wood smoke wafting through the air, blue and misty. Because the valleys of the Wasatch Front are shaped like bowls surrounded by mountains, air pollution such as smoke can settle in the valleys. In winter, temperature inversions cast a ceiling of warm air over the cold valleys, trapping emissions and deteriorating air quality.

Early city planners understood the effect of mountains on air pollution. If a smoky factory were built at the mouth of one of Wasatch Mountain’s canyons, the winds from the canyon would blow the smoke through the valley. Thus, Mitchell discovered that in the 1890s factories were being built on the west side of the valley. The legacy of that decision lives on today: the western side of the Salt Lake Valley still bears much of the valley’s industrial activity and disproportionately exposes the majority-minority community to air pollution.

“We should be thinking, as we embark on major development projects,” Mitchell says, “what the environmental and social impacts are, not just this year or next year or next quarter, but 50 or 100 years later. road.” 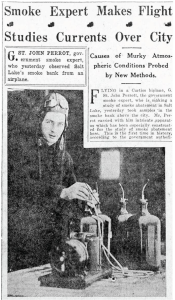 At the turn of the 20th century, Utahans spoke of the “smoke nuisance” that also came with soot. Measuring soot pollution was as simple as placing outside enamel jars that collected, in some parts of the city, 1,000 tons of soot per square mile over the course of a winter. That’s a huge amount of soot, Mitchell said. “It’s air you can chew.”

Atmospheric scientists have been trying to learn all they can about the reasons for Utah’s air quality problems. In 1919, “government smoke expert” G. St. John Perrot flew a biplane through the Salt Lake “smoke bank” and collected samples to test hypotheses about the inversion phenomenon of temperature.

More than a century later, atmospheric scientists are using similar methods. In an upcoming project called AQUARIUS, researchers will fly an airplane through the temperature inversion layer, studying the chemistry that forms aerosol particles from atmospheric gases. “The chemistry is not fully understood,” says Mitchell. “Someone had the exact same study design literally a hundred years ago.”

Mitchell and Zajchowski found that throughout the state’s history, records indicated a preference for business and industry to address air pollution without requiring government intervention. But sometimes when citizens pushed against industry, industry backed down.

The restart of the Geneva steelworks after a 13-month closure due to a labor strike caused an increase in pollution, 1987.

In 1899, the first copper smelter opened in Murray, starting a smelting and refining industry tied to Utah’s mining industry. But the smelter facilities had no pollution controls and were emitting sulphur, arsenic and lead. Farmers close to the smelters took legal action when their crops began to die from the toxic emissions. Smelter owners responded by funding research into agricultural practices and accusing farmers of “farm smoking” or suing smelters for money instead of tending to their crops.

“They’re trying to say farmers are just bad at farming by trying to blame it on something other than their emissions,” Mitchell says.

In 1986, the Geneva Steel plant in Utah County closed for 13 months during a strike. The shutdown provided an opportunity for a natural experiment to compare health outcomes in the area during the shutdown with times when the factory chimneys were in full operation. Studies published in peer-reviewed scientific journals have shown that hospital admissions for bronchitis and asthma among preschoolers in Provo were cut in half during the year off.

But a Geneva Steel-funded rebuttal study, not peer-reviewed before being made public, claimed the difference in hospitalization rates was due to respiratory syncytial virus, or RSV. This claim was false since the original studies had monitored RSV rates. But, write the authors, “the misinformation effort to create misleading media coverage had the desired effect of creating an artificial controversy that clouded the public’s understanding of the health impacts of air quality in the ‘Utah for years’.

In 1893, a newspaper article predicted that Utah’s economic and social growth would be closely tied to the quality of its air.

“Factories that blacken the city with smoke can be as much a detriment as they are a benefit,” writes the Salt Lake Herald-Republican, “for Salt Lake has as much to gain from the increase as it will receive from the people who will select it as their residence because of its pure air and the cleanliness it must draw from the factories.

This interplay between the environment and the economy has been a persistent theme in Utah’s history, Mitchell says.

“The two are paired,” he says. “Some people will say we haven’t done a good enough job one way or the other, but that effort to balance those two things has been there throughout our history.”

Today the OneUtah Roadmap Governor Spencer Cox continues to address this relationship between the environment and the economy by including air quality as part of the state’s plan for sustainable growth and economic advancement.

where we are now

What will be written about today’s chapter in Utah’s air quality story?

“We’re better positioned than we’ve ever been,” Mitchell said. “But the question of how quickly we solve these problems is up to us.” 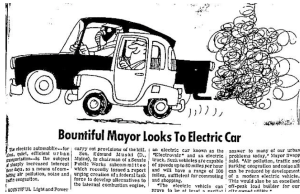 Editorial explaining how electric vehicles could improve air quality along the Wasatch Front, 1966.

Although Utahans have long known that air quality is a problem and action needs to be taken to fix it, the missing piece we now have in our hands, says Mitchell, is air quality technology. clean energy, including zero emission technology. “And where we are now is that we’re starting to see these technologies in many cases becoming the best option, the cheapest option.”

Because of these emerging and advanced technologies, Mitchell says Utah’s air quality will continue to improve even if the state does not act.

“We also have a historic opportunity to lead this conversation,” Mitchell said, adding that Utah is well positioned to lead as a conservative state with a sizable tech industry and the support of elected officials.

“We have a choice,” Rep. John Curtis said recently, as reported by the daily herald. “We can do it here in the United States, or we can sit back, ignore the climate movement and watch the next industrial revolution unfold outside of the United States. The world has sent the signal that it will buy clean energy technologies. Are we going to sell it or are we going to watch it sell? »

Our moment also comes with worsening air problems due to climate change, including wildfires and increased ozone formation.

“So as we move forward on air quality, the climate impacts that make air quality problems worse,” Mitchell says. “There will be a lot of work to change the technology and the types of energy we use to get around and heat our homes. But I think it’s a huge time of opportunity.