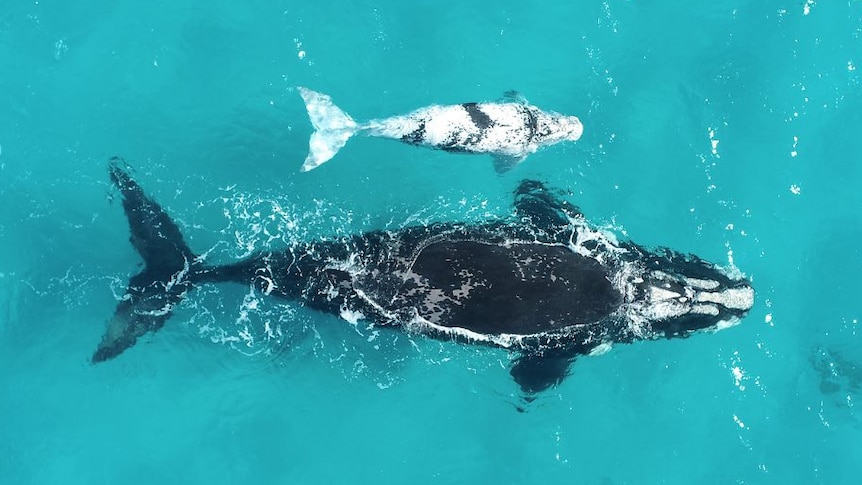 Katy Fannei presses her face against the window of a plane as it soars above the Southern Ocean.

From the vantage point, she peers and squints, searching for a shadow in the silky blue below.

“There’s one just below me, Katy,” said pilot Mick Moir.

Whales came into Ms Fannei’s life on the last day of a year-long Australian adventure.

The then-German tourist was on a beach on Rottnest Island when a tour guide approached and offered a free ride on a whale-watching boat.

She agreed, never considering how transformative the sight of a humpback whale and her calf would be.

As they dipped and dived, she felt a fear that would change her life.

She soon decided to pack up in Germany, move to Australia and study marine biology – a series of events that would ultimately inspire a community in Western Australia to write a new history with the giants of the oceans.

In Albany, on the south coast of Western Australia, whales have always been the center of attention.

For decades it was home to a thriving whaling industry, with the slaughter of right whales, sperm whales and humpback whales bringing much needed jobs and money.

But in 1978, amid protests and political pressure, the industry finally followed the rest of the country and shut down for good.

“They were called the right whale because they were the right whale to hunt,” says Ms Fannei, referring to their slow-moving nature, high fat content and tendency to sit close to shore.

“It brought it almost to extinction.”

She says they reproduce more slowly than other species, which means it took longer for their numbers to rebound.

But while Ms Fannei was studying her Masters in Biological Sciences at the University of Western Australia, she discovered a perfect opportunity to learn more about the gigantic mammals.

The state has two of the three main aggregation points and many other emerging aggregation areas, where southern rights come from Antarctica to breed and calve between late May and October.

Yet they had not been studied in depth before.

Ms Fannei teamed up with fellow researcher Max Fabry to change that, hoping their efforts would fill a knowledge gap and aid conservation efforts.

“It really feels like it’s our responsibility to make sure that when they’re here in this vulnerable stage of calving, whelping, nursing and mating, they’re not disturbed. and that we take care of them,” says Mr. Fabry.

But funding shortages made things difficult at first.

A photograph of a rare white whale swept David and Lisa-Maree Ellett into the fight to protect the species.

The couple and their daughter were flying over Cheynes Beach, east of Albany, when they captured the elusive mammal and then shared it on a local Facebook whale-watching page.

All sorts of questions poured in; the community, the media and, above all, Ms. Fannei and Mr. Fabry.

“They had so many questions, we just thought it would be easier if they went out and had a meal with us,” Ms Ellett said.

It would be another chance for Ms. Fannei, with the reunion giving way to a groundbreaking idea.

“When I and Katy first came up with the idea of ​​having a group of pilots do the investigation, she just looked at me like I had two heads and said, ‘Who’s gonna pay? for that? says Mr. Ellett.

The community mobilizes to help research

The Little White Whale Project is now facilitating the first weekly aerial survey of southern right whales in the region, and possibly the world.

Once a week, one of 13 pilots on a route sheet will fly Ms. Fannei along a 450 kilometer stretch of coast from near Albany to Point Ann in Fitzgerald River National Park, so that she can count the whales.

They make sure to respect the regulations and not to get too close to them.

All images provided by the Little White Whale Project for this story were taken under a DBCA wildlife license, with UWA animal ethics approval and produced in accordance with CASA regulations.

“Right now we’re about five hours away by poll,” she said.

“I think in the last survey I counted about 89 whales including calves.”

Sometimes a second plane and a pilot are needed to bring her back.

At the end of the flight, she counts all the observations, to compare them over the weeks.

It builds on knowledge compiled through an annual aerial count of whales between Fremantle and Ceduna, which has taken place every year since 1976.

“The planes were used for whaling station spotters in the days when they were hunting,” Mr Ellett said.

“And now we’re using them to help with the recovery of the southern right.”

But it’s not cheap, with Mr Ellett estimating that last year’s fuel cost around $35,000.

“Everything is provided voluntarily. So I felt bad asking for so much,” Ms Fannei said.

“But in the end, they’re also really passionate about the project and quite grateful to see the whales.”

Another sponsor provided the couple with a car, so they could monitor the same whales with drones throughout the week.

This is Mr Fabry’s specialty, and he has research permits from WA’s Department of Biodiversity, Conservations and Attractions, as well as ethics approval from the University of Western Australia, allowing him to fly near animals.

He says whales have spots on their heads called calluses, which form a unique pattern like a fingerprint, allowing him to recognize individual whales.

Fabry hopes the research can also provide information on conservation on a larger scale.

“[The southern right whales] are a direct link between the Antarctic environment and us,” he says.

“[They are] an excellent indicator of how the Antarctic ecosystem is affected by climate change.”

The natural world faces a myriad of threats ranging from climate change to pollution and environmental degradation.

But he retains some defense mechanisms, including the ability to inspire a motivating sense of awe.

The Little White Whale project, and its members want to see the city write a new history with the whales, is a striking example.

“Albany is known as one of the places where Australia’s last whaling station was located,” says Ms Ellett.

“And it’s a big tourist destination for that; people go out and visit the whaling station.

“It was also an opportunity for us to be part of the next piece of history.”

On a Saturday afternoon in September, between bites of a barbecue lunch, the pilots and their partners hover around an Albany airport hangar, discussing the latest sightings and plans for future investigations.

“I think the full loop is the best way to describe it, considering everyone has always been so involved with the whales in this area in one way or another,” Fabry said.

“So people refer to the southern right whale as ‘their whale’.

“It feels a bit like the whale’s house here. It really is.”

ABC Great Southern will air a summary of the week’s news, stories and photos every Thursday. Register here.

2022-10-09
Previous Post: #1 Iga Swiatek, local favorite Barbora Krejcikova in Ostrava final
Next Post: Amid Kharge vs Tharoor, a Look at the History of Congressional Presidential Elections