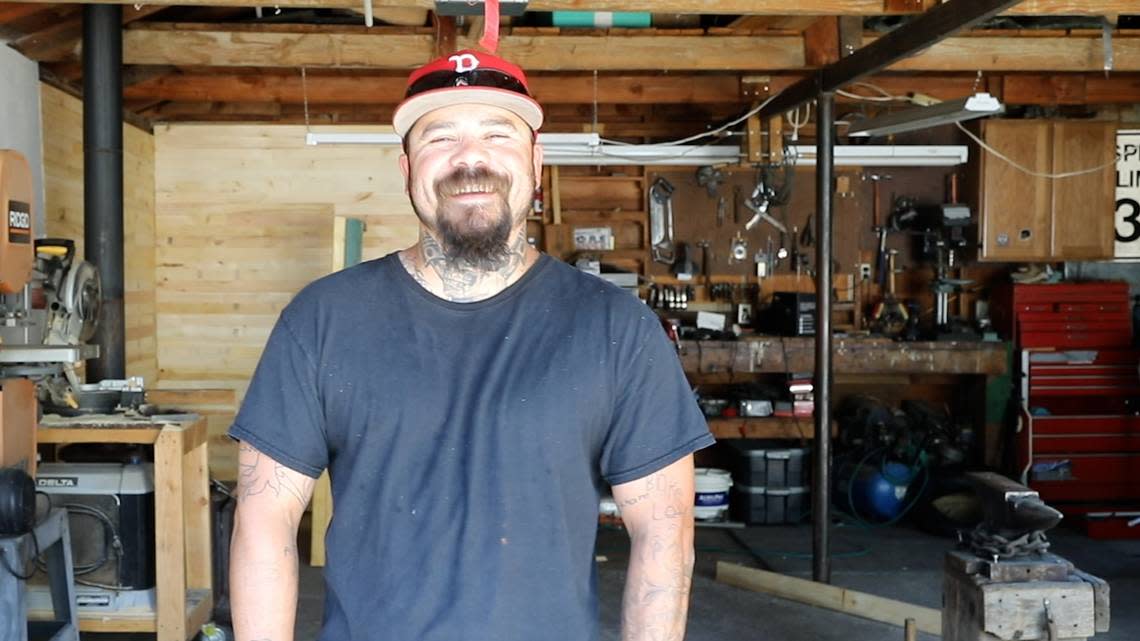 What started as a cheaper way to make woodworking tools has become a passion, a small business, and the reason Emilio Carbajal will be on TV this week.

Weiser resident Carbajal will be participating in an episode of the History Channel’s blade-making contest show “Forged in fireon Wednesdays at 7 p.m. MT.

The 39-year-old said he started working with metal about five years ago after watching tutorials on YouTube. The first tool he made was a wood gouge.

“I needed a tool, and I couldn’t afford it,” Carbajal said. “So I started watching videos, and it just grew from there.”

After that he said he was addicted.

“For every project, you have to think three or four steps ahead,” Carbajal said. “So even though they’re knives and they’re quite similar, you still have to think about them, so that’s what I loved.”

The Customs of Carb

Over the past five years, Carbajal has manufactured hundreds of steel blades, hooks and other tools. He sells some of these knives through his company, Carb’s Customs.

For now, he only sells his knives through instagram and Facebookbut he said he wanted to make a website soon.

He also said he no longer does custom commissions. Instead, he’ll usually craft a knife, post a photo, and let customers come to him. He said that since he started selling his knives about five years ago, he has sold between 100 and 150.

“It was a hobby, a bit of a business,” said Carbajal, whose day job is as a correctional officer at Snake River Correctional Institution in Ontario, Oregon.

Carbajal said his most popular items are hunting knives.

Journey to “Forged in Fire”

Carbajal said “Forged in Fire” was last minute and unexpected. He said a friend sent him a link and told him he had to apply.

“I was just like, ‘Well, I might as well try. The worst they can say is no,'” Carbajal said.

But the TV show didn’t say no, and within weeks the producers were at his house interviewing and filming him in his forge.

“They contacted me and said, ‘We are coming to your house in seven days,'” Carbajal said. “I was like, ‘I’m not ready for this.’ I mean, I haven’t even had work leave yet.

Carbajal works in a converted garage behind his house in Weiser. The shop is divided with his woodworking equipment on the left and his metalworking projects on the right.

In the middle of the floor is a pile of scrap wood, and woodworking and metalworking tools and equipment line the walls. But what sets this space apart from a typical backyard workshop is the forge, which Carbajal says burns at around 2,000 degrees.

While Carbajal kept his appearance on the show quiet for a while, he said most people in town now know about it. He said his kids like to brag about how their dad is going to be on TV.

Carbajal said he likes to be alone, but he can’t help but smile when he talks about how his family wants to invite everyone they know to the watch party.

“That’s pretty awesome,” he said. “They went too far, in my opinion.”

Carbajal and his wife have a total of nine children between the ages of 6 and 21 in their blended family. Although the hot steel he works with often prevents his children from helping in the forge, he still sees his metalwork as an opportunity to connect with them.

“I think the most exciting part is just having something to pass on to my kids,” he said.