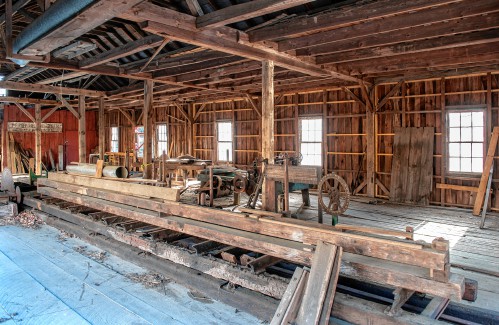 An unknown fate for the historic Slarrow sawmill in Leverett

LEVERETT – At the foot of Cave Hill Road along the Sawmill River in central North Leverett is a building where timber was first cut before the American Revolution and where the saw cart handled logs of 42 feet used to make the keels of ships during the Second World War.

Despite the long history of the Slarrow Sawmill, last operated in the late 1990s and restored following a roof collapse in 2003, its immediate future became uncertain after the Select Board told private owners , the Kirley family, that she would not accept the building, the 2-acre property and the dam, as a gift at this time. Board members said they would leave the decision to the city assembly to decide.

The decision not to receive the property came despite a positive recommendation from an ad hoc committee set up by the Select Board to study the matter, following the failure of a potential sale of the building to a historic curator last spring. .

“It’s a beloved site,” says Richard Nathhorst, who chaired the ad hoc committee and knows that photographers like to take pictures of the sawmill from the nearby bridge. “Everyone finds it aesthetically pleasing and it has significant historical value for the city. “

Susan Marenek, president of the Town’s Historical Commission, said the challenge of restoring the sawmill is a challenge many communities face.

“The reality is to reuse these old properties adaptively and try to keep them from falling apart, is a complex issue for all cities,” said Marenek.

The past year has, however, given him reason to hope.

“One of the things I enjoyed about the process is that we are talking to each other to find a solution,” said Marenek. “It’s really positive, although we haven’t found a solution yet.

Lance Kirley of Florence, who has been the contact for the Kirley family, did not immediately respond to requests for comment. At a 90-minute Zoom forum in October, however, he expressed hope that the Select Board would take action.

“As a family, we hoped that the donation and acceptance would come in a timely manner,” he said.

This forum was one of a series of programs organized by the Historical Commission, both in person and through Zoom, to educate the community about historic landscapes. The North Leverett Mill was the last of 15 working mills that once stood along the three-mile stretch of the Sawmill River between Lake Wyola and the Connecticut River. Those in Leverett either disappeared or were turned into private homes.

Nathhorst said none of the equipment inside the Slarrow sawmill is working, and mechanically the water turbine will not work. But the building is not in danger. “Structurally it’s pretty solid and it’s in reasonably decent condition,” Nathhorst said.

The stone structure of the dam is around 200 years old, but is not in imminent danger of collapse, he said.

Community Preservation Act funds were directed to the building after the roof collapsed under the weight of the snow. This forced the owners to maintain the historic character of the mill. “It must continue in the future as a historic sawmill site,” said Marenek.

Amy Boyce of Husk Preservation, Inc. in Scituate, after 18 months of study, determined the costs would be too high for her, probably at least $ 230,000 for preliminary repairs.

“The sum for repairs + design + permits and professional services to clear environmental barriers far exceeds what I could manage financially,” Boyce wrote in an email.

Some people have raised the idea that the property could become a home, restaurant, or other business, but without on-site potable water and a septic system, these options are not feasible. “Frankly, the only use I can personally see is that of a living history museum,” Nathhorst said.

There are also concerns about the responsibility and how to establish a business fund or other means of ensuring that the property generates income to offset costs, should it become an industrial heritage site. . Nathhorst said he might consider setting up a corporate zone to ensure the accountability and fiscal separation of a private, non-profit foundation to undertake such work.

Another possibility is for a micro hydroelectric or solar project. Nathhorst said officials had consulted with New England Hydropower to assess the feasibility of an Archimedes’ screw hydroelectric generator at the plant’s dam, which could produce electricity, possibly in the form of a generator. three-phase 40 kilowatts. The photovoltaic could go up on the roof.

Marenek notes that the sawmill could be the centerpiece of a historic trail that would lead people to the foundations of other sawmills along the Sawmill River.

“This is all going to take time, and the city just doesn’t know what to do in the meantime,” Marenek said.

“It could turn into something really nice, a keystone for programs along the Sawmill River,” said Nathhorst.

Scott Merzbach can be contacted at [email protected]

2021-12-26
Previous Post: Heard of intimate coaches? Here’s what they do and when to seek help
Next Post: Alabama History Teaching Standards Overdue Revisions Delayed | Alabama News