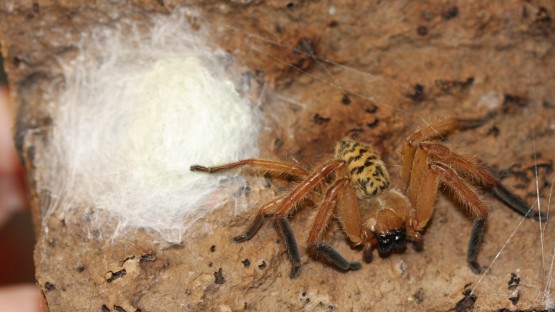 A new study of hunter spiders links evolutionary lineages to life-history traits, providing models for predicting social behaviors in other less-studied species. Sociality is very rare in spiders – only five hunter species out of nearly 1,300 are known to exhibit social behaviors.

It represents the broadest and most in-depth phylogeny of hunter spiders – a tree-like diagram showing the evolutionary relationship between groups of organisms – while incorporating extensive data on the biology and life history of each species. Compared to solitary species, the results reveal that social species live in retreats of larger permanent family groups until offspring are up to a year old, have egg sacs glued to surfaces so that they cannot be moved and start feeding later in their development.

“Social species do something different from all other solitary species,” said Linda Rayor, lead author of the paper and a senior research associate in the Department of Entomology at the College of Agriculture and Life Sciences ( CALS).

“What makes this a landmark study is that we incorporated behavioral and life history traits in the hunter that I’ve been collecting for 20 years in social and solitary species,” she said.

Huntsman spiders (family Sparassidae) are fairly common in tropical and subtropical regions around the world. They are also hugely diverse, with the Sparassidae, the 11th largest family of spiders, dating back 100 million years.

Known social species span two genera and include four from Australia (Delena cancerides, D. lapidicola, D. melanochelis and D. spenceri) and one unidentified species (Damastes) found in Madagascar. These social species live in large family groups with a single mother and several broods of her offspring in retreats under the loose bark of dead trees or under rocks. The growing offspring remain in their natal retreat for five to twelve months, depending on the species.

Social species have also been found to have egg sacs stuck to the back of the retreats so that they cannot be moved, which promotes socialization over long periods in family groups. In contrast, solitary species are more mobile and do not have large, long-lasting retreats, so the offspring do not stay with their mother for more than a few weeks.

It is estimated that at least 1,000 hunter species remain to be described. Anecdotal evidence suggests that other species in various parts of the world may also be social, as researchers have seen hunter spider mothers live in retreats with many stages (larval developmental stages) of offspring that share prey.

“There are likely a number of other of these relatively social hunter spiders, and this study provides a guide to looking for similar life history traits to see if they are also social,” Rayor said.

In the study, the researchers analyzed 271 spiders (262 were hunter spiders and nine were other types of spiders used for comparison), covering 37 genera and eight of the 11 sparassid subfamilies and included life history data for 40 species, based on laboratory analyzes and field observations collected by Rayor between 2002 and 2021. Gorneau also sequenced four genes to provide a complete picture of the evolution of the hunter spider .

“Some genes evolve faster and are good at examining differences between more closely related species, while some genes evolve slower – are more conserved – and are better at understanding evolutionary relationships between groups of species that may be more so we picked four genes that struck the right balance,” said Gorneau, who worked in Rayor’s lab and in the lab of co-author Corrie Moreau, Martha N. and John C. Moser Professor of Biosystematics of Arthropods and Biodiversity and Director and Curator of the Cornell University Insect Collection.

In future work, Rayor and colleagues plan a comparative analysis of prey sharing among 29 species of social and solitary hunters that will use this new phylogeny.

2022-06-06
Previous Post: Will endeavor to bring back historical documents about Goa from Portugal: CM Sawant
Next Post: The HISTORY channel launches a series of travel experiences around the world