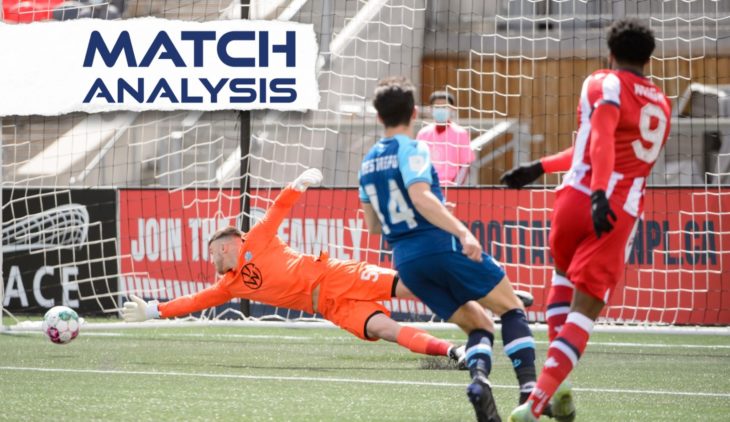 Match in one minute or less:

For the second week in a row, a late goal by an Atlético Ottawa forward earned his team a 1-0 victory and made their home fans happy. This time it was Malcolm Shaw’s turn to be the hero, heading home a cross from Miguel Acosta in the 81st minute to win the game 1-0.

Ottawa had the majority of the strong chances throughout the game, hitting the target a few times, but Christian Oxner made some impressive saves in the Halifax goal, including a diving save to prevent another Shaw header earlier in the game. His counterpart Nathan Ingham saved his team in the 52nd minute, making a double save to counter the efforts of Sam Salter and Joao Morelli from close range.

Ottawa’s perfect record remains intact with a second clear win in a row, while HFX drops to 1-0-1 after two games.

For the first time in club history, Atlético Ottawa have won back-to-back games in the CPL, and it’s also the first time they’ve kept consecutive clean sheets. Finishing bottom of the table in 2021 wasn’t necessarily an accurate reflection of how they performed in some games, as they often succumbed to the pressure on themselves and gave up plenty of mediocre goals and penalties.

During the offseason, they added new pieces to their roster, better quality players from a season ago, and head coach Carlos Gonzalez drilled them well to prepare for that pressure, but also to play on the front foot and be the ones to dictate play. Many of Halifax’s chances came from outside the box as Ottawa were tough to break, but on the occasion there was a close range chance – like Salter and Morelli’s chances early in the second half – Nathan Ingham’s composure was there to take care of that.

“We have to be proud of that, the reality is that I felt the players didn’t know the feeling of winning two games in a row,” Gonzalez said after the game. “Mentally, we have to work on that. Most of the players are new but we still have this ghost from last season, and we have to work on the mentality so that they think with a winning mentality and they have to create the circumstances for the team to win every week.

“Still, we have a lot of work to do. We know the team needs to improve at certain points in the game, and we’ll work on it, but a win always gives you a boost.

They are currently top of the table for two matches and will look to build on that against Valor FC next weekend, still at home at TD Place.

There were plenty of moments during Saturday’s game where Wanderers striker Joao Morelli seemed to be trying to do it all on his own.

Playing in the false nine/free roaming role he played against York, he would often drop deeper to receive the ball in the middle of the park, before pushing it himself instead, and this often resulted in shots from the outside the area. The Brazilian had six of his team’s eight shots, four of them from distance.

Four of those six goals were also on target, including one from the edge of the penalty area which he tried to shoot under Nathan Ingham, but the Ottawa keeper managed to deflect it.

He was joined in attack by Sam Salter and Cory Bent, who didn’t have the same attacking opportunities as against York, often shut down by Max Tissot or Miguel Acosta on either wing, or by Ottawa’s central midfielders Ollie Bassett and Ben McKendry if they tried to go through the middle. The focus was on high pressure from Ottawa, which was stingy defensively all afternoon.

It was a frustrating afternoon for the reigning Player of the Year winner, and to make matters worse, Morelli went down with the injury towards the end of the game, appearing to hurt his knee and having to be taken off the field on a stretcher. .

Hart didn’t have any immediate updates on Morelli after the game, only that it “didn’t look good” and that “the players are all in the locker room worried” about their teammate. With Akeem Garcia already injured, anything major for Morelli would be a blow, but Hart rightly pointed out that his health is the priority after the game rather than worrying about how they would play without him.

A criticism from Ottawa head coach Carlos Gonzalez after their first game of the season against the Cavalry was that Ballou Tabla and Maxim Tissot weren’t receiving enough of the ball to make a big impact on offense. They took a step forward in that regard on Saturday, with those same two players more involved and making things happen.

Tissot in particular went up and down a lot on the sidewall, sometimes cutting a little inside to make things feel more central. He combined well with left winger Zach Verhoven and on a few occasions transferred the ball across the park for Tabla or Miguel Acosta on the right, quickly creating space to attack the opposite flank instead.

It was evident on goal, with Tissot blasting away in his own half before passing the ball to Miguel Acosta, who crossed the ball over Shaw’s head.

“It started with a broken play where we won the ball, Sissoko played it all the way, and it came to me,” Tissot recalled. “I skipped a few challenges and was able to play it to Miguel, who played a great ball into the box and a great finish from Malcolm.

“It didn’t start in a classic construction situation, but we made the most of it and I think it’s an honor for our team this year.”

His head coach was also pleased with the efforts of his wingers.

“Wingers, wingers, are players who have to be very important in our attack, but some of them haven’t played in that position for a long time, and they’re starting to understand the demands of that position. I think “they are doing a great job, Max understands perfectly what we want – he created a lot of danger in the first half with a lot of 2v1 situations with Verhoven. Ballou has his moments during the game, I felt that today” today that he was better than the last game, that he took a step forward, we have to continue and improve them so that they are more comfortable and have a clear idea of ​​what we want .

CanPL.ca Player of the Game

After joining the club from York United in the offseason, Nathan Ingham has been fantastic for Atlético Ottawa and made five saves on Saturday for his second consecutive clean sheet.

Atlético Ottawa wrapped up a three-game home game against Valor FC on Sunday, April 24 (3 p.m. ET/2 p.m. CT) at TD Place. Halifax will play one more game on its season-opening trip, traveling to the other coast to take on Pacific FC at Starlight Stadium (4 p.m. PT / 8 p.m. AT). 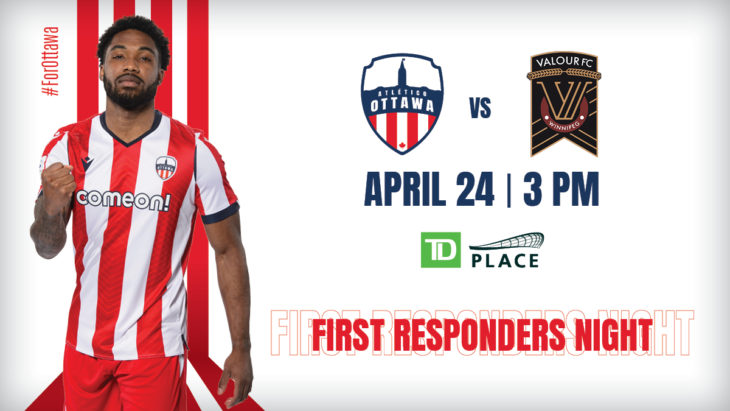 Watch all matches live on OneSoccer. In addition to its website and app, OneSoccer is now available on TELUS channel 980 and Fubo TV. Call your local cable provider to request OneSoccer today.