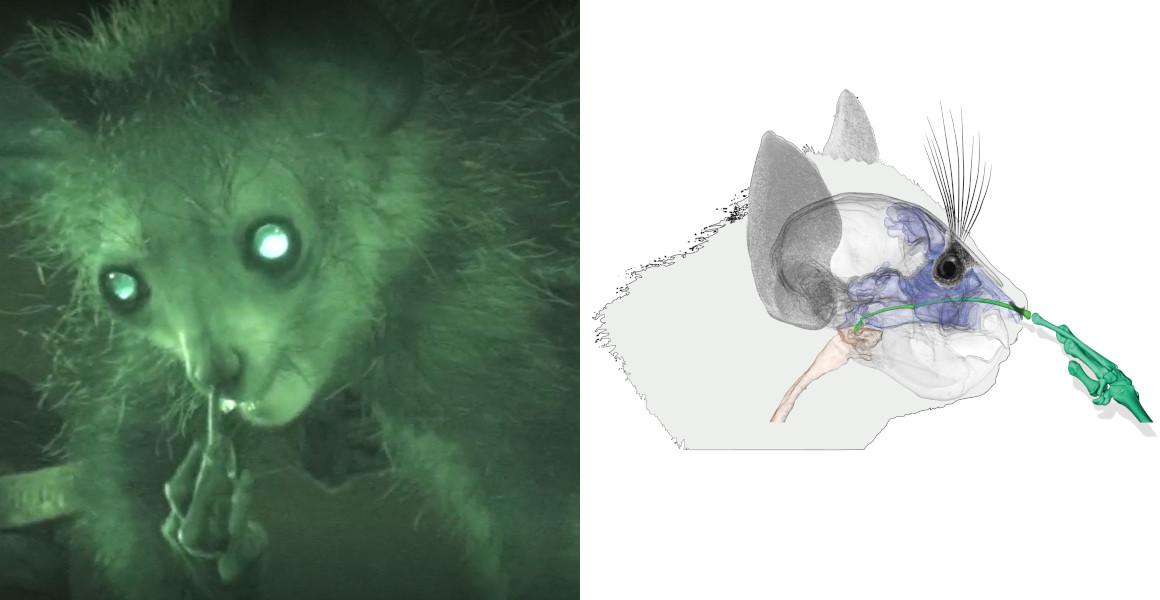 The aye-aye is a species of strepsirrhine primate closely related to lemurs and the largest nocturnal primate in the world. In folklore, they received an ugly and undeserved reputation as harbingers of death, and as such were often killed on sight in some countries. The myth comes in part from their highly specialized and elongated finger, which legend says they use to point at those marked for death.

In truth, the third and fourth fingers (middle and ring fingers) of the aye-aye are elongated and skinny and are highly specialized to help them feed. Surprisingly, the fingers make up about 65% of the length of the hand, with the hand itself making up over 40% of the total forelimb length. Aye-ayes use these adaptations to find food by tapping on wood, generating acoustic reverberations, which allow them to locate larvae inside which they can then extract with the specialized fingers.

Lead author Anne-Claire Fabre is curator of mammals at the Naturhistorisches Museum der Burgergemeinde Bern and associate professor at the University of Bern, as well as scientific associate at the Natural History Museum. She noticed the newer use of the aye-aye long middle finger while filming their behavior at the Duke Lemur Center, a research foundation in North Carolina.

Anne-Claire, says: “It was impossible not to notice this aye-aye who was picking his nose. It wasn’t just a one-off behavior, but something he was fully engaged in, inserting his extremely long finger a surprisingly long distance into his nose, then sampling everything he dug up by licking his clean finger!

“There is very little evidence as to why we, and other animals, choose noses. Almost every article you can find was written as a joke. Among serious studies there are some in the field of psychology, but for biology there is almost nothing. A study shows that picking your nose can spread bacteria such as Staphylococcuswhile another shows that people who eat their own snot have less tooth decay.

Previous studies on the subject have suggested that ingesting nasal mucus may play an important role in the immune system and may also prevent bacteria from sticking to tooth surfaces, thereby improving oral health.

This new paper aims to bring together the few research papers that cover nose picking in primates in one place, as well as provide photographic and video evidence of aye-aye behavior for the first time. In doing so, the team found that nose picking has been documented in at least 12 primate species, including humans, chimpanzees and orangutans.

To better understand this behavior, the research team also scanned the skull and hand of an aye-aye specimen to reconstruct the position of the middle finger inside the nasal cavity. These reconstructions suggest that the finger is likely to descend into the throat.

Roberto Portela Miguez, Senior Curator in Charge, Mammals, at the Museum and co-author of the new paper, says: “It’s great to see how museum specimens and numerical methods can help us elucidate behaviors that are usually quite difficult to observe in their natural habitat. We hope that future studies will build on this work and help us understand why we and our closest relatives insist on picking our noses!

‘Aye-ayes are in great danger and really need our help. Articles like this can hopefully help bring attention to species, highlight how little we know about them, and get more people to support their conservation.

A final observation cited by the team is that primates love to ingest their own mucus may simply be due to its texture, crunchiness and saltiness, meaning this nifty trick may reward them with a treat!

its presence in Daubentonia madagascariensis is published in the zoology journal.

The Natural History Museum is both a world-renowned scientific research center and the most visited natural history museum in Europe. With a vision of a future in which people and the planet thrive, he is uniquely positioned to be a powerful champion for balancing the needs of humanity with those of the natural world.

It is the custodian of one of the most important scientific collections in the world comprising more than 80 million specimens. The breadth of this collection allows researchers around the world to document how species have responded and continue to respond to environmental change – which is essential to help predict what might happen in the future and inform policy and future plans to help the planet.

The Museum’s 300 scientists continue to represent one of the largest groups in the world studying and enabling research on all aspects of the natural world. Their science provides essential data to help the global fight to save the future of the planet from the main threats of climate change and biodiversity loss to the search for solutions such as the sustainable extraction of natural resources.

The Museum uses its enormous global reach and influence to fulfill its mission to create Earth Defenders – to inform, inspire and empower everyone to make a difference for nature. We welcome more than five million visitors each year; our digital production reaches hundreds of thousands of people in more than 200 countries each month and our traveling exhibitions have been seen by approximately 30 million people over the past 10 years.