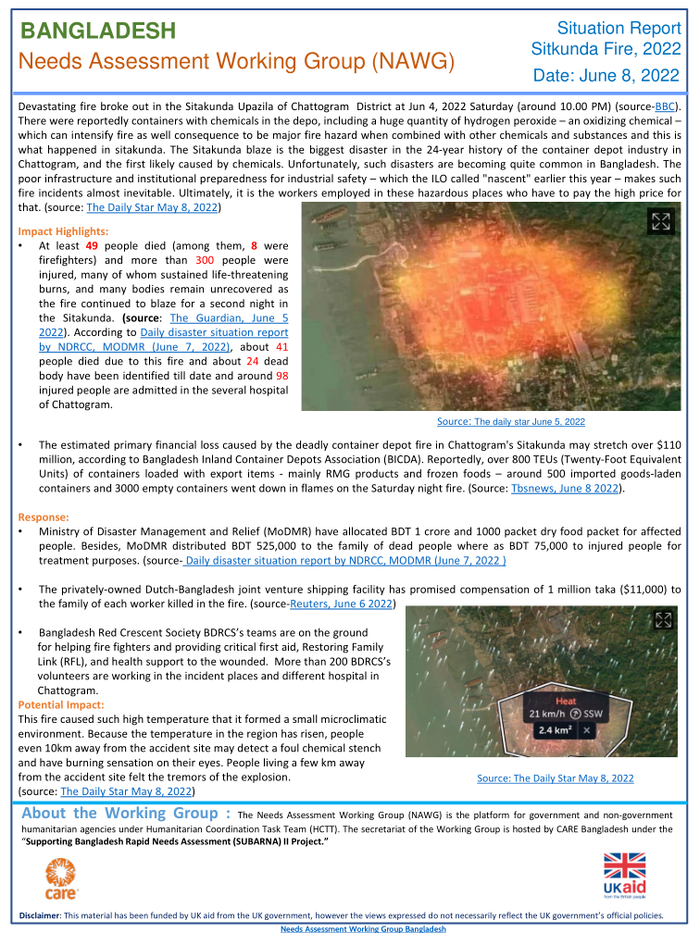 A devastating fire broke out in the Sitakunda Upazila of the Chattogram district on Saturday June 4, 2022 (around 10:00 p.m.) (source-BBC). There were reportedly containers of chemicals in the deposit, including a huge amount of hydrogen peroxide – an oxidizing chemical – which can also intensify fire and be a major fire hazard when combined with other chemicals and substances and that’s what happened in sitakunda. The Sitakunda fire is the biggest disaster in the Chattogram container depot industry’s 24-year history, and the first likely to be caused by chemicals. Unfortunately, such disasters are becoming quite common in Bangladesh. Poor infrastructure and institutional preparedness for industrial safety – which the ILO described as “nascent” earlier this year – makes such fires all but inevitable. In the end, it is the workers employed in these dangerous places who have to pay the highest price. (source: The Daily Star May 8, 2022)

• At least 49 people died (including 8 firefighters) and more than 300 people were injured, many of whom suffered life-threatening burns, and many bodies were not found as the fire continued to flambé for a second night in the Sitakunda. (source: The Guardian, June 5, 2022). According to NDRCC Daily Disaster Situation Report, MODMR (June 7, 2022), approximately 41 people have died due to this fire and approximately 24 dead bodies have been identified so far and approximately 98 injured are admitted to several hospitals in Chattogram .

• According to the Bangladesh Inland Container Depots Association (BICDA), the estimated major financial loss caused by the deadly fire at the Chattogram container depot in Sitakunda could amount to more than $110 million. According to reports, more than 800 TEU (twenty foot equivalent unit) containers loaded with export items – mainly RMG products and frozen foods – around 500 loaded containers with imported goods and 3000 empty containers caught fire during the Saturday night fire. (Source: Tbsnews, June 8, 2022).

• The Ministry of Disaster Management and Relief (MoDMR) has allocated BDT 1 crore and 1,000 dry food packets to affected people. In addition, MoDMR distributed 525,000 BDT to the family of the deceased and 75,000 BDT to the injured for treatment. (source – Daily Disaster Situation Report by NDRCC, MODMR (June 7, 2022)

• The Dutch-Bangladeshi joint venture private marine facility promised compensation of 1 million taka ($11,000) to the families of each worker killed in the fire. (source-Reuters, June 6, 2022)

• Bangladesh Red Crescent Society BDRCS teams are on the ground assisting firefighters and providing essential first aid, Restoring Family Link (RFL) and medical support to the injured. Over 200 BDRCS volunteers are working at the incident sites and at various hospitals in Chattogram.

This fire caused such a high temperature that it formed a small microclimatic environment. Because the temperature in the area has risen, people even 10 km away from the accident site can detect a foul smell of chemicals and have a burning sensation in their eyes. People living within a few miles of the crash site felt the tremors from the blast. (source: The Daily Star May 8, 2022)