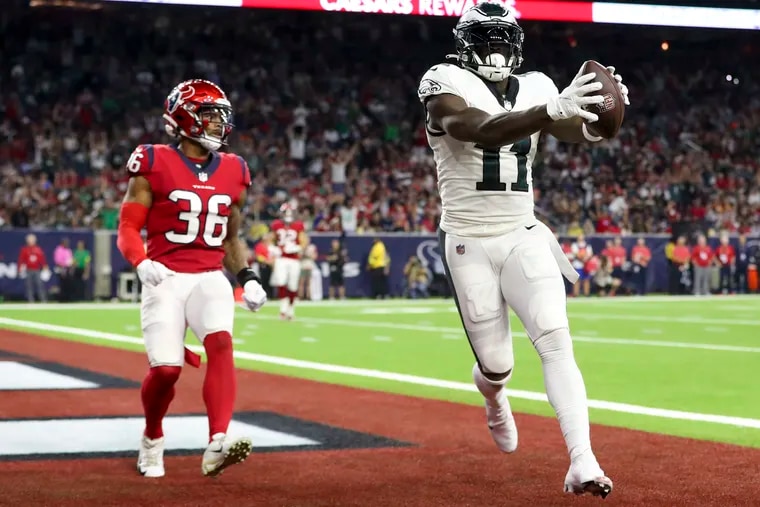 HOUSTON — After beating soft zone coverage and carrying a 17-yard touchdown pass from Jalen Hurts, wide receiver AJ Brown was left alone in the corner of the end zone. Brown then excitedly waved to his teammates, while performing a “Fly, Eagles Fly” waltz with both arms waving up and down like a bird.

The Eagles received major contributions from key playmakers – Brown and Gardner-Johnson – both of whom were added before the start of the regular season. Their pivotal moments in the third quarter of Thursday night’s game helped the Eagles to a 29-17 win over the Texans at NRG Stadium.

With the win, the undefeated Eagles went 8-0 for the first time in franchise history.

Hurts returned to Houston for the first time in his professional career. The 24-year-old quarterback showed nervousness early on, but he quickly got rid of the nerves, including a rare early turnover – his first lost fumble of the season.

Hurts showed decisiveness and precision in separating the secondary from the Texans. He completed 21 of 27 throws for 243 passing yards and two touchdowns. Tight end Dallas Goedert was Hurts’ leading receiver with eight catches (on nine targets) along with 100 receiving yards and a touchdown. More impressively, Hurts distributed the ball to almost everyone; before the end of the first half, Hurts had completed passes to seven different pass catchers.

Heading into Thursday’s game, the Texans hadn’t scored an opening touchdown all season.

However, the Eagles made it easy for the Texans to get downfield to start the game with a nine-play drive that spanned 75 yards, consisting of a handful of offloads and rushes from rookie running back Dameon Pierce.

Earlier in the week, defensive coordinator Jonathan Gannon highlighted Pierce during meetings and visits with his unit. He wanted to limit the explosive rusher and turn the Texans into a one-dimensional offense. However, Pierce proved to be just as explosive in person as he was on film. He kept the game competitive with his team-best 139 rushing yards on 27 carries. The Eagles struggled to bring down Pierce on first contact.

Heading into the Eagles’ next game against the Commanders, they will need to prioritize sure tackling and technique. The defense eventually crumbled, but that specific area could hamper them against better opposition.

The Eagles responded with their own powerful offense led by running back Miles Sanders. He finished with 93 yards with a touchdown on 17 carries. Kenneth Gainwell added 22 rushing yards and a touchdown.

Sanders’ score marked his sixth rushing touchdown, which ties his career high for most touchdowns in a single season. The fourth-year running back remains healthy and plays like he has something to prove. Sanders is eligible to reach free agency at the end of the year.

Veteran defensive tackle Fletcher Cox was slow to leave the field after a play in the first half. He needed the coaches’ attention, but Cox was able to pull through on his own. After missing just one game, Cox joined his teammates in the huddle.

During the second half, Josh Jobe suffered a thigh injury.

2022-11-04
Previous Post: ArtSci Roundup: Assessing the 2022 Midterm Election Results with Implications for the Next Two Years and 2024, Empires Strick Back: Football and Colonialism, and More
Next Post: 2022 Recruitment: North Gwinnett to Norcross