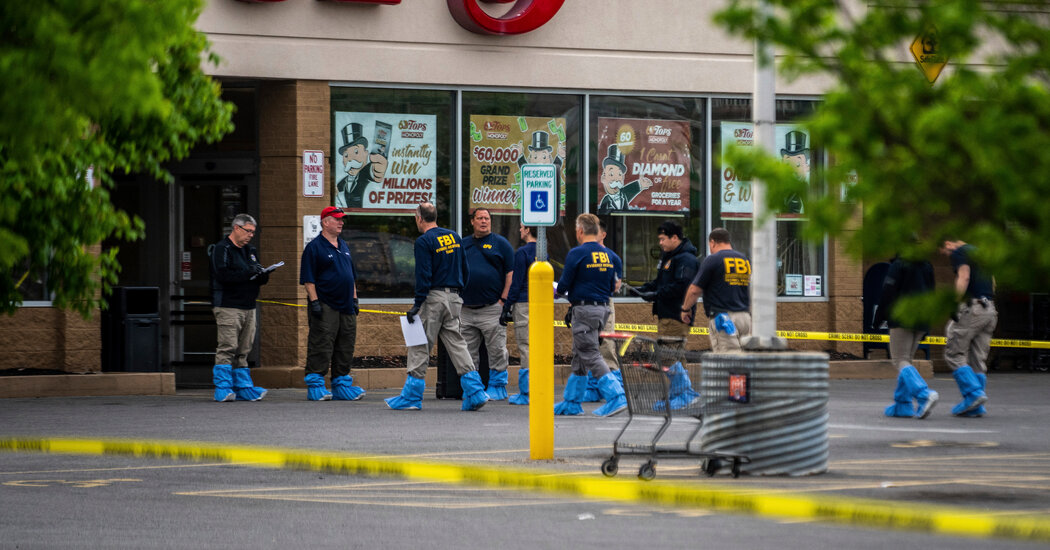 During his 30 years as a Buffalo police officer, Aaron Salter Jr. earned a reputation for bravery, with more than one of his exploits recorded in the local newspaper, The Buffalo News. Once he chased an arsonist, the newspaper reported, and on another occasion confronted a burglar armed with a shotgun.

Mr. Salter retired in 2018, moving on to a job that should have been far less treacherous: working as a security guard at Tops supermarket in East Buffalo.

But on Saturday, Mr Salter, 55, would again encounter a situation that would test his bravery when a man – wearing body armor and camouflage gear and armed with an assault weapon – burst into the supermarket and opened fire.

Mr. Salter confronted the shooter and returned fire. But he became one of 10 people, including three other store workers and several shoppers, who were killed in one of the deadliest racist massacres in American history.

At least three other people were injured and almost all of the victims, including Mr. Salter, were black.

On Sunday, more details emerged of many of the victims.

A bullet fired by Mr Salter bounced off the shooter’s body armor, according to Erie County executive Mark Poloncarz.

“He’s a real hero, and we don’t know what he stopped,” Buffalo Police Commissioner Joseph Gramaglia said of Mr. Salter, speaking on ABC’s “This Week.” “There could have been more victims without his actions.”

Mr. Salter’s son, Aaron Salter III, said in an interview that his father “had been on the force for 30 years and nothing like this had ever happened”.

“He was just doing security work, and this guy had to come in there and take all these innocent lives for no reason,” his son said.

He described his father as a “car guy”. When Mr. Salter retired from the force, he bought a 1967 Cadillac Coupe DeVille, which he repaired, polished and cleaned in his spare time.

Mr. Salter and his wife also owned a trailer which they used to take their family on trips. They had three children, including an adopted daughter.

Her son said he planned to go to his parents on Sunday.

“He told me he was going to call me today to tell me if I should come or not,” he said. “And now we are here.”

Here are the stories of some of the other victims:

Catherine Massey, 72 years old: Ms. Massey was known for her civil rights advocacy. Almost a year ago, after a state legislator’s cousin was shot and killed near the legislator’s district office, Ms Massey writes a letter to the editor in The Buffalo News calling for tougher federal gun control measures. She called for more responsibility for gun manufacturers and sellers. “There must be extensive federal action/legislation to address all aspects of the issue,” she wrote.

“She was in love with the community,” said her longtime friend Betty Jean Grant. “And she liked black people. And she would fight for anyone, no doubt.

Ruth Whitfield, 86: Ms Whitfield was a devoted parishioner for 50 years at Durham Memorial AME Zion Church, where she sang in the choir, her daughter-in-law Cassietta Whitfield said. Ruth Whitfield had lived in Buffalo for more than five decades, raising four children. In recent years, she took care of her husband, who was in a retirement home. She had eight grandchildren. “She was a religious woman who cared deeply about her family,” her daughter-in-law said.

Roberta Drury, 32: Ms Drury had gone to the Tops supermarket to buy groceries to cook dinner, according to her sister, Amanda Drury. “She was very dynamic,” Ms Drury said. “She was always the center of attention and kept the whole room smiling and laughing.”

Celestine Chaney, 65: Mrs Chaney had visited her sister and they went to the supermarket because Mrs Chaney wanted to get strawberries to make shortbread, which she loved, said her son, Wayne Jones, 48, who confirmed that she had died in the shooting. “It’s kind of crazy that she’s here to shop, because we’re going to shop together,” he said.

During the shooting, Ms Chaney’s sister went to the cooler area where workers store fresh food, Mr Jones said. People hid there from the shooter; the sister survived. “But my mother can’t really walk like she used to,” he said. “She can’t run.”

Ms Chaney was a single mother and worked at a costume maker and then made baseball caps before retiring. Mr Jones was her only child and she had six grandchildren.

Heyward Patterson, 67: Mr Patterson went to the supermarket every day, offering people rides for less money than they would have had to spend on a taxi or ride-sharing service, his great-niece Teniqua Clark said.

This is how he earned money to support three children, his nephew Terrell Clark said.

Mr. Patterson, who had lived his entire life in the Buffalo area, was a kind person who was “family oriented” and enjoyed singing in church, Ms. Clark said.

“For this to happen to him, especially if it’s a racially profiled hate crime, I never would have thought it would be him,” she said. “He is very harmless.”

André Mackniel, 53 years old: Mr Mackniel had gone to Tops grocery store for a birthday cake, crisps and a soda for his three-year-old son, who was having a party at a relative’s house later that day.

The boy was so close to his father that he “followed him like his shadow”, said his mother and Mr Mackniel’s fiancée Tracey Maciulewicz.

Before entering the store, “He told me he loved me,” Ms Maciulewicz said, before adding: “I will be back. »

But Mr. Mackniel, who had six children and was a devoted Miami Heat fan, never got away with it.

“He was so genuine, so sweet and so kind – like no type of person I’ve ever met before,” Ms Maciulewicz said. “It’s completely unfair that racism is still present in 2022, and it’s not right that my son, who is half white and half black, has to grow up without a father.”