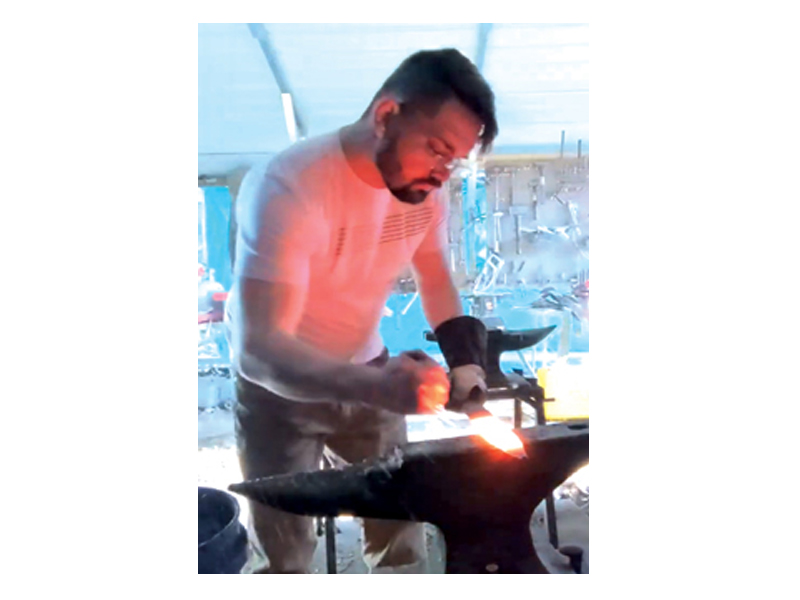 A change in leadership during the COVID-19 pandemic placed Carter County resident Brenden Bohannon in a line of work that earned him a spot on the History Channel’s popular blacksmithing show Forged in Fire.

Bohannon’s episode airs Wednesday at 9 p.m. on the History Channel.

“I coached mixed martial arts and trained amateur and professional athletes, as well as a bowl carver until COVID-19 hit. I was looking for something else to do and ended up seeing a video on YouTube one day. I had a chat with a friend of mine and I went out and dug a hole in my back yard and filled it with charcoal,” Bohannon said. “I beat something that was knife-shaped on a hammer head just to try it out. I really never got hot enough or didn’t really know what I was doing, but I had so much fun to try it I just ran with it.

The same friend ended up building an anvil a week later for blacksmithing. From there, he had a formal lesson with a friend he met at a craft fair as the two built a center-point chisel together.

In the spring of 2021, Bohannon took to social media platform TikTok, experimenting with a way to get his name out there. He produced a few videos exploiting the use of a technique called Leiden Frost Effect, where he dipped his hand in water to make his signature on his pieces by striking the steel at 2000 degrees with his bare hand.

“At this temperature, I can feel it move under my hand and I can make an impression,” Bohannon said of the technique. “The flash of water evaporates which creates a steam jacket and this jacket is like a membrane on my hand that prevents it from getting burned. People thought it was really cool and started asking me questions about it. I explained that it’s a scientific principle that protects my hand but it’s something I use to mark each piece that makes it special. No one else does that.”

Bohanan ended up being picked up by LADbible, which produces compilation videos. Two months later, he received a message on Instagram from a casting agent for Forged in Fire.

Bohannon went through the interview process and all the background checks and the casting director thought he would be a good candidate.

“I think people watching the show don’t take into account that it’s a game show,” Bohannon said. “So we are in competition and neither of us knew what we were doing when we got there. They put the challenge in front of you, so you have to figure it out and try to figure out exactly how you’re going to achieve it. My episode was shot in December. It was awesome. I had a lot of fun and made three very good friends.

These friends – Ira, Mark and Andrew – now text Bohannon to exchange photos of their work daily. It was very special for Bohannon that the three met and formed an instant bond with each other through their shared experience.

“Every blacksmith that’s on this show can take on these challenges and complete it in a matter of days to a week,” Bohannon said. “What makes it so difficult is trying to do it in that three hour window. It’s a crazy time trying to make functional knives.

To prepare for his time on the show, he said he spent a lot of time watching different episodes of the show to see how others approach challenges and prepare to complete their projects on the fly.

While many had stores stocked with all the latest technology and tools, Bohannon said he only had two things to rely on.