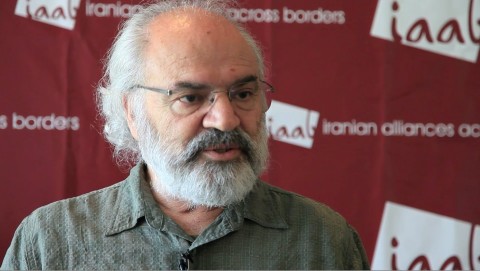 Scholars from Northwestern University and beyond will gather June 2-3 to celebrate the contributions of Emeritus Professor Hamid Naficy, a world authority on Iranian cinema and diaspora studies.

Naficy is a pioneering scholar in the cultural studies of diaspora and exile, postcolonial cinemas and media, and Iranian and Middle Eastern cinemas and media. His many books include “The Making of Exile Cultures: Iranian Television in Los Angeles” (1993), “Home, Exile, Homeland: Film, Media, and the Politics of Place” (1999), “An Accented Cinema: Exilic and Diasporic Filmmaking” (2001), and the four volumes “A Social History of Iranian Cinema” (2011-12).

The celebration is co-presented by the Middle East and North Africa Studies Program, the Department of Radio/Television/Film, the Block Museum of Art, and the Center for Global Culture and Communication.

Events are free and open to the public. Registration is mandatory for the opening night (Thursday, June 2). A virtual option is available. Media must RSVP with Mohamed Abdelfattah at [email protected].

The opening night will take place at the Block Museum of Art and will include a screening of “Mouth Harp in Minor Key: Hamid Naficy In/On Exile”, a documentary about Naficy’s life directed by Maryam Sepehri, and a keynote speech by Michael MJ Fischer, professor at Massachusetts Institute of Technology (MIT), titled “Unaccented Hamid Naficy: Cartoonist, Ethnographer, Social Historian of Film, Friend.”

“Hamid’s work has broad implications and applications in film and media studies far beyond Iran,” said Rebecca Johnson, director of the Middle East and Iran Studies program. North Africa at Northwestern. “Scholars who reflect on the relationship between artists, their homelands, and their diasporic communities – wherever that homeland is – have always looked to Hamid’s work.”

“Naficy’s fellowship foreshadowed what is now called Global Iranian Studies and Global Middle Eastern Studies,” said Danny Postel, associate director of Northwestern’s Center for International and Area Studies and one of the organizers. Postel, himself an author on Iranian affairs, added that Naficy’s work has in many ways set the intellectual groundwork for these fields, which have taken off in recent years.

Two of the speakers, Simran Bhalla and Maziyar Faridi, earned their PhDs at Northwestern and remember Naficy’s influence with great admiration.

“Hamid has made invaluable contributions to film and media research, and beyond, to film production and exhibition,” said Bhalla, who is now a visiting assistant professor at Tulane University. “His rigorous interdisciplinary method of social history is a model for scholars of Southern, transnational and diasporic cinemas.”

Faridi said his experience at Northwestern as a doctoral student was enriched by having been able to study with Naficy. “In addition to her scholarship in transnational film studies, Naficy’s unique intellectual curiosity and playful creativity continue to inspire my research and teaching,” said Faridi, who is now an assistant professor at Clemson University. .

For more information on conference attendees and programming, click here.