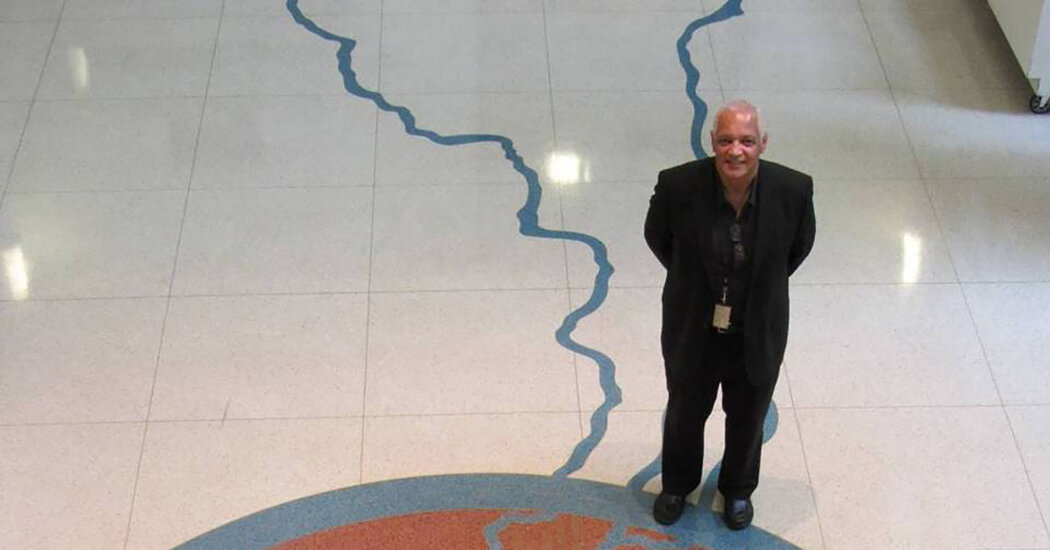 In June 1991, Christopher Moore’s mother called him from North Carolina with bad news: an old family cemetery was being searched in Lower Manhattan by the federal government for an office building. The cemetery had been established long ago by Mr. Moore’s Native American ancestors and later became known as the Negroes’ Burying Ground.

“Do you want to know for me if we have people in this cemetery?” his mother asked him, as Mr. Moore, whose mother was Native American and father was black, recalled in a 2007 New York Times essay.

A journalist by training (he had worked in radio news), a historian by vocation and by nature a man of boundless curiosity, Mr. Moore quickly visited the site.

“When I was a child, my mother told me: ‘Read if you want to learn a subject. But listen if you really want to master it,” Moore wrote. “Listening was the ancient Indian way of finding solutions to problems.”

Information was hard to come by because site workers were required to sign confidentiality agreements, he said, but some admitted that trucks full of fragments of human bones, buried before the cemetery closed in 1794 , were swept away even as archaeologists excavated the site. determine its historical significance. Then, he says, he was devastated to learn that the federal government had decided to abandon the archaeological dig and proceed with construction.

“But then the skeletal remains of a woman were found and within days another 10 skeletons were exposed,” he recalls. “Outraged that no one seemed to be paying attention to this extraordinary historic moment, I called every reporter I knew – and my mother, of course.”

After intervention by Mayor David N. Dinkins and other elected officials, the office building was redesigned to accommodate the cemetery. The site has been commemorated with five works of public art and designated a New York City Landmark and a National Historic Landmark.

The result also speaks to Mr. Moore’s passion for preserving the past, which he would pursue throughout his varied career as a curator, archivist, author, storyteller, researcher and longest-serving member of the Preservation Commission. of New York landmarks, from 1995 to 2015.

He was 70 when he died March 13 in a Brooklyn hospital. His wife, Kim Yancey-Moore, said the cause was complications from Covid and pneumonia.

Christopher Paul Moore was born on January 20, 1952 in Suffern, NY to Willard and Norma (DeFreese) Moore. His mother was an artist from the Ramapough Lenape Council of Native Americans; his father was a farmer.

After earning a bachelor of fine arts in theater and journalism from Northeastern University in 1974, Mr. Moore became editor of the National Black Network, which includes more than 100 black-oriented radio stations. As an actor, he appeared in the soap opera “As the World Turns” and an Off Broadway production of “A Soldier’s Play”.

He married Kim Yancey, an actress, in 1990. Besides her, he is survived by their two sons, Terrence and Matthew, and his sister, Nancy Lipscomb.

Mr. Moore became a research coordinator for the Schomburg Center for Research in Black Culture at the New York Public Library in Harlem, where he was “a beacon of knowledge,” said its director, Joy L. Bivins.

Mr. Moore helped organize a number of Schomburg exhibitions, including “Lest We Forget: The Triumph Over Slavery” (2001); “Africana Age: Transformations of Africa and the African Diaspora in the 20th Century” (2002); “Ralph Bunche’s Centenary” (2003); and “The Buffalo Soldiers: The African American Soldier in the US Army” (2004). He contributed to “The Black New Yorkers: The Schomburg Illustrated Chronology” (2000), by Howard Dodson.

Mr. Moore is also the author of “Standing in the Need of Prayer: A Celebration of Black Prayer” (2003) and “Fighting for America: Black Soldiers, the Unsung Heroes of World War II” (2005).

His “Santa and Pete: A Novel of Christmas Present and Past” (1998), a book he wrote with Pamela Johnson about African-Dutch Christmas traditions in New Amsterdam, was adapted for a CBS TV movie, ” Santa and Pete”, in 1999, with James Earl Jones and Hume Cronyn.

Mr. Moore wrote and produced the History Channel’s “The African Burial Ground: An American Discovery” (1994), starring Ruby Dee and Ossie Davis, at the Lower Manhattan site, and wrote a history of the cemetery for the National Park Service .

As a member of the Monuments Commission for two decades, he was instrumental in the preservation of various properties and, even before being appointed, wrote the reports naming several monuments, including Mother AME Zion Church and the Abyssinian Baptist Church, both in Harlem. .

“Under his quiet but brilliant leadership,” she said, “the commission has made strides in protecting and celebrating African-American history.”