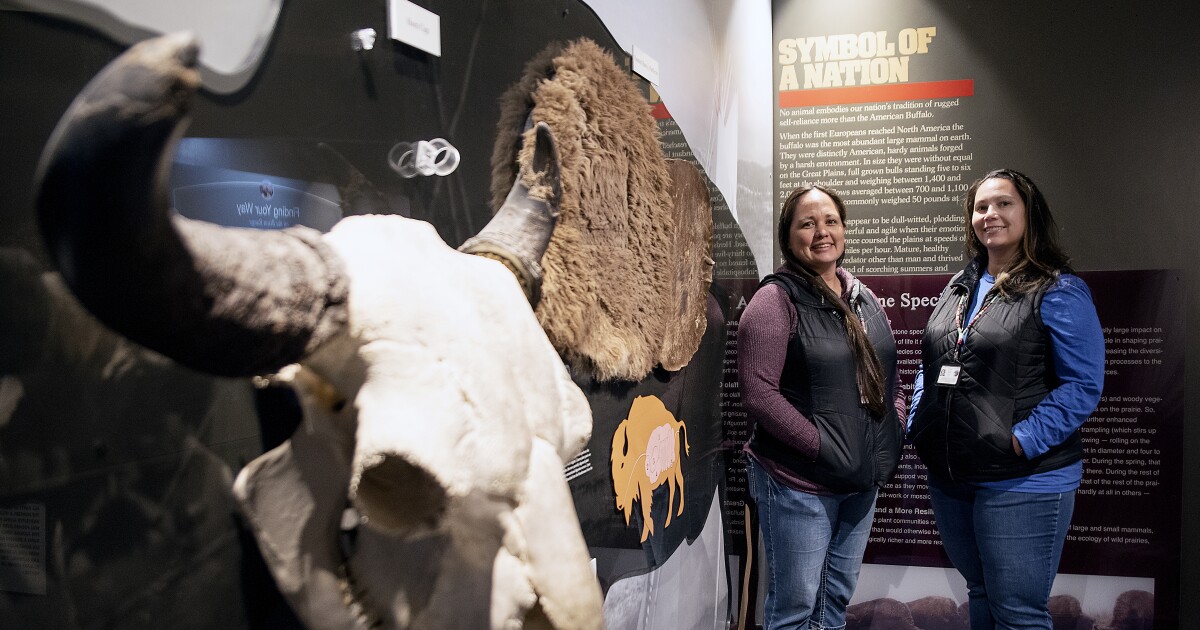 Roy Bigcrane was reading a transcript of an oral historian’s speech from the late 1970s when he learned that his great-grandfather Latati had brought bison to the Flathead Reservation.

“It was a break in my heart that, you know, the whole story wasn’t there,” Bigcrane said.

For years, the U.S. Fish and Wildlife Service history at the visitor center has credited Latati’s father-in-law, not Latati himself, with bringing the mammals to the area.

Bigcrane said Native American history is often incomplete or riddled with errors when told by others. “But we’re just trying to do our part to correct the false versions of history.”

In bison range in northwestern Montana, a narrow gravel road takes tourists past the visitor center along the hills near the Flathead River. If they’re lucky, they’ll see bison roaming the land freely.

The Confederated Salish and Kootenai tribes recently took over management of the 18,000-acre wildlife refuge, as part of a congressional water pact. The land was taken by the US government without the consent of the tribes.

As the tribes resume their stewardship of the land, they are correcting inaccuracies at the bison visitor center to better reflect their language and history in bison conservation.

A full documentary titled In the spirit of Atatice tells the story of Bigcrane’s great-grandfather and the history of the land. The tribes hope to open the visitor center soon.

Updates come as US comes to terms with its past disparagement of indigenous cultures – shift in offensive sports names and mascots, and renaming landmarks that once bore anti-Aboriginal derogatory names.

Whisper Camel-Means is CSKT’s division manager for the bison range.

“And when you’ve come here before and looked at some of the ways things have been aired, the story wasn’t quite right,” she said.

Camel-Means said previous exhibits used the Sioux word for bison, instead of the Salish word. She said it gave visitors the impression that all Native American tribes were the same.

“We are not an Indian language grouped together, Indian things. We are Se̓liš, we are Qĺispe̓, we are Ksanka – we all have different stories,” Camel-Means said.

Tom McDonald, chairman of the CSKT Tribal Council, said the tribes had already tried to change the information, but were unable to. He said the U.S. Fish and Wildlife Service prioritizes wildlife preservation over changes inside the visitor center exhibits.

“They didn’t have professionals to research this information, you know, to develop the true story, to do the research,” McDonald said.

Stephanie Gillin, education program manager for CSKT’s natural resources program, said she worked with cultural committees in each tribe to get the story correct for the new exhibits.

“We listen to our elders about some things that we need to protect, because if we don’t, if we release it, we lose what it gives us – you know, we lose that power it gives us,” she said. mentioned.

In the early 1900s, the federal government broke a promise to the tribes and took lands now known as the bison range. The oral histories now included in the bison range tell how members of the tribe were excluded from land management operations when the United States turned the land into a wildlife refuge.

Generational trauma, Gillin said, is still felt today within tribal communities, and correcting the information at the reception center is a matter of respecting and preserving their history.

Roy Bigcrane is featured in the documentary which will be at the visitor center. He said it’s important that the story be accurate.

” It’s just the truth. The truth as best we can tell it and know it.

He is happy that his great-grandfather’s role in bison conservation is now recognized and hopes that this message will be passed on to future generations.