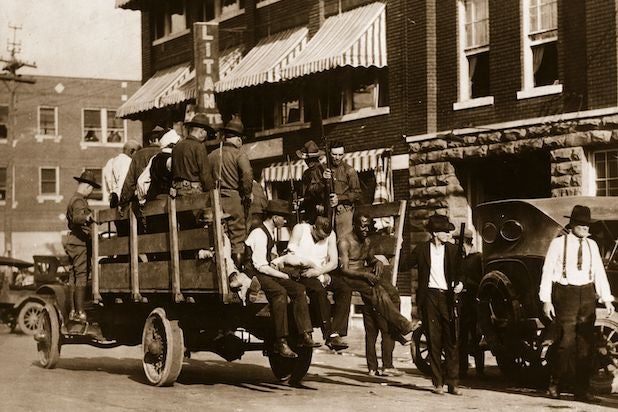 The History Channel commissioned a two-hour documentary film titled “Tulsa Burning” on the Greenwood Massacre of 1921 in Tulsa, one of the worst acts of racist violence in American history.

“Tulsa Burning: The 1921 Race Massacre” (working title) will debut later this summer to coincide with the 100th anniversary of the massacre, in which a mob of white residents, many of whom are even deputized by city officials, attacked black residents and burnt local businesses and homes to the ground, destroying what was the wealthiest black neighborhood in the country at the time known as “Black Wall Street”. Early reports from the time recorded 36 dead and thousands of black residents interned in hospitals and large facilities.

“Tulsa Burning” in particular will take an in-depth look at the birth of Black Wall Street until its catastrophic fall in two bloody days, examining how these events continue to ripple today. It will also incorporate archival footage and footage from the era, as well as stories and interviews with historians from organizations such as the Tulsa Historical Society & Museum, the John Hope Franklin Center for Reconciliation, the Tulsa Race Massacre. Centennial Commission, and the historic Vernon AME Church, among others.

The History Channel will also be a partner of Why Not? Foundation, Endeavor, RedFlight Innovation and Values ​​Partnerships to create an educational and experiential campaign focused on the history and legacy of Black Wall Street in Tulsa. It will provide historical context while encouraging young people across the country to pursue avenues of innovation and entrepreneurship. The initiative will communicate the importance of investing in black communities, with a focus on young people – connecting the docuseries to the need for progress and development now.

“The Tulsa Race Massacre was not something I was told about in school or in any of my history books,” Westbrook said in a statement. “It was only after spending 11 years in Oklahoma that I learned of this deeply disturbing and heartbreaking event. This is one of the many overlooked stories of African Americans in this country that deserves to be told. These are the stories we need to honor and amplify so that we can learn from the past and create a better future. “

“The horrific story of the Black Wall Street fire has haunted me for a long time,” Nelson said in a statement. “While I was able to touch on the Tulsa Race Massacre in a short segment from a previous movie, I knew this story needed a much deeper treatment. I’m grateful to be working on this film with such wonderful partners – Marco Williams with whom I collaborated on “Tell Them We Are Rising”, Russell Westbrook, Blackfin and The History Channel. Together, we aim to restore Tulsa, Oklahoma and the fateful events surrounding the 1921 massacre of its black residents to their rightful place in American history. “

“The History Channel is committed to educating our audience about the past, its impact on the present and its role in building the future,” said Eli Lehrer, executive vice president and head of programming for History, in a statement. “Almost 100 years later, the emotions of the Tulsa Race Massacre are still ingrained in the fabric of our society and this poignant piece of our history is sadly more relevant than ever, as racist events unfold. unfold before us in our present history. I am honored to partner with Russell, Stanley and Marco to tell this poignant story with a authenticity and dignity that only they can bring.