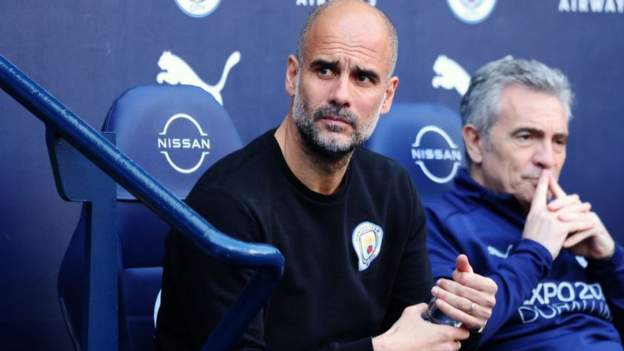 Pep Guardiola said ‘everyone in the country supports Liverpool’ after Manchester City took a three-point lead at the top of the Premier League.

City’s 5-0 victory over Newcastle on Sunday came the day after Liverpool lost points in a 1-1 draw with Tottenham.

By contrast, Guardiola’s side lost in the Champions League semi-final midweek as the Reds reached the final.

“Everyone in this country supports Liverpool, the media and everyone,” Guardiola told beIN Sports.

“Of course because Liverpool have an incredible history in European competition. Not in the Premier League, because they have won one in 30 years, but that’s no problem at all.”

Guardiola’s side are looking to win a fourth Premier League title in five years, with Jurgen Klopp’s Liverpool winning the 2019-20 crown, and visit Wolves on Wednesday, ahead of a trip to West Ham and a home game to finish against Aston Villa.

“Liverpool are on side [Manchester] United as the most important team in terms of titles, legacy, history, dramas for many, many things” Guardiola said.

“But we’ve been here for 11 or 12 years. I know sometimes we’re uncomfortable, but I don’t care if people want Liverpool to win more than us. That’s not a problem.”

He added: “We need to make nine points or maybe six, it depends what happens in the next two games in terms of goal difference, but now Wednesday is the real, real, real final for us. Our destiny is in our hands and that is important.”

City defenders will miss the rest of the season

Guardiola has also confirmed that defenders Kyle Walker, Ruben Dias and John Stones will miss the rest of the season through injury.

Dias was sent off in City’s win over Newcastle, while Stones and Walker both missed the game and Guardiola said they would play no further role in the team’s Premier League title defense.

“Ruben, Kyle and John are out until the end of the season,” he said.