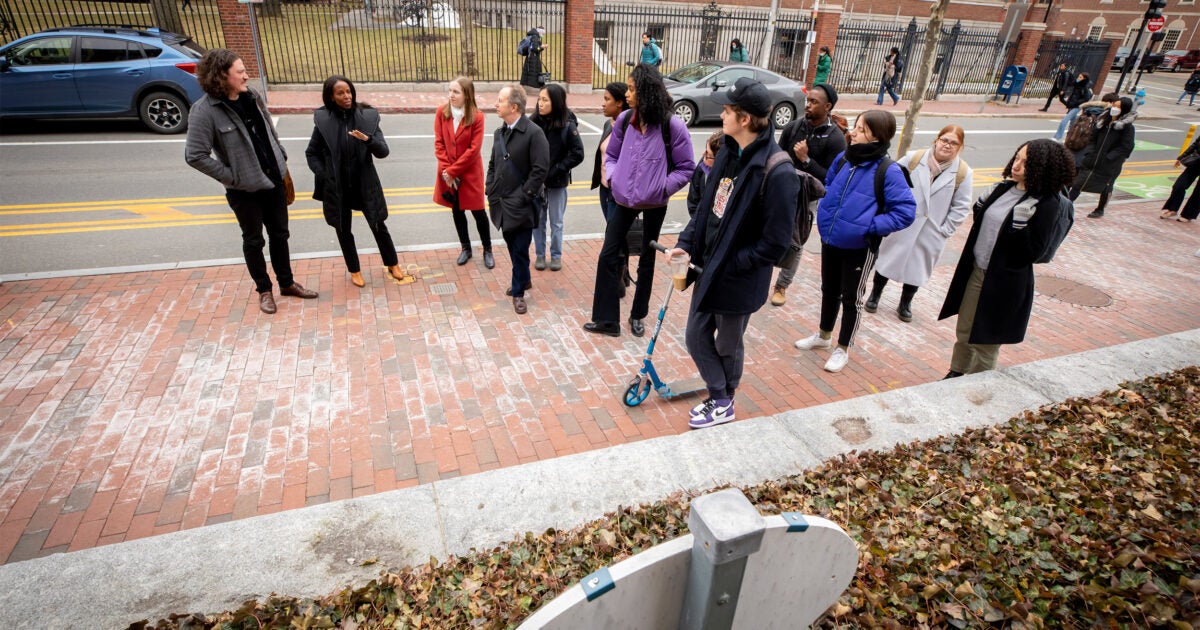 Examining the Stories Behind the Nation’s Landmarks – Harvard Gazette

Art history and architecture professors Sarah Lewis and Joseph Koerner have worked on the issue of monuments for years through projects like Lewis’s “Vision and Justice” course and Koerner’s film “The Burning Child”. This semester, the two have joined forces for a new course called “Monuments,” which aims to spark critical conversations about public works of memory.

“The course began by asking the question: Why have monuments, particularly in the United States, become such points of contention in recent years? What does the fixation on monuments at this historic moment have to teach us specifically about justice and racialized living in American democracy? The class works on the premise that we need to reconsider monuments to better understand the essential role they play in representative democracy,” said Lewis, associate professor of art and architectural history and African studies. and African Americans.

At a time when the country is grappling with efforts to remove monuments honoring controversial American leaders such as Robert E. Lee in New Orleans and Richmond, Va., as well as other Confederate figures across the South , “Monuments” aims to provide students with a space to hold important conversations about the history behind the people and events honored.

Howard Johnson ’22, a history and literature concentrator, said the class of 10 undergraduate and graduate students, as well as the former chairman of the Art of the Americas collection at the Museum of Fine Arts, encouraged students to think about how representations of history impact interactions in society and whether monuments reflect the feelings of an entire people or the desires of specific individuals to cement certain narratives.

“The narrative associated with these monuments may be distinct and public, or it may be hidden, you have to seek it out,” he said. “Often these more hidden monuments are not as scrutinized and therefore the messages they can send are dangerous.”

The class analyzed the contemporary monument “Triumphs and Laments” by South African artist William Kentridge, who told the story behind the work via Zoom. Koerner, Victor S. Thomas Professor of Art and Architectural History, described “Triumphs and Laments” as a 550-meter frieze on the banks of the Tiber in Rome that was created by pressure washing centuries of gravel from the river wall to form a row of 20 meter high figures telling the story of Rome. The piece aims to portray the narrative that monuments are “usually one person’s victory and another (the victim)’s lament,” Koerner said.

“By studying how this work was situated in Rome (the ‘eternal’ city often visited by the ruin) and listening to the artist’s strategies, we explored new ways for monuments to make strong public statements without imposing the permanence of the victor or the victory”, declared the professor. mentioned.

There is also a tension within each monument between the past and the future, said student Zoë Hopkins.

“Monuments are, on the one hand, claiming history by trying to commemorate something. Often it’s involved in some fantastic notion of the past or a lie of the past,” said Hopkins, a junior focusing on HAA and AAAS. “At the same time, they’re presuming into the future and they’re basically suggesting knowledge of future generations to come who will be looking at this monument to learn about history.”

Hopkins said “Monuments” got her thinking about time and memory, as well as how artworks and monuments might work in the future. In addition to Kentridge, Koerner and Lewis have invited four other guest speakers, including Monument Lab’s Paul Faber and Naima Murphy Salcido, concept artist Hank Willis Thomas, and MASS Design Group executive director Michael Murphy, to discuss the monument’s connection to the memory.

Murphy, who holds a master’s degree in architecture from the Harvard Graduate School of Design, worked with the Equal Justice Initiative to create the National Memorial for Peace and Justice in Montgomery, Alabama. The memorial includes the Soil Collecting Project, which engages local communities to consider the legacy of lynching by collecting soil from lynching sites and posting it with dates and names of victims.

Sarah Moses, a student at the Graduate School of Arts and Sciences, who lived for a time in Georgia and studies architecture, said she found herself looking for the distinctive red floor of Athens, Georgia , while looking at photos of the floor display. “This project is really striking, because I think we think a lot about the unknowable,” she said. “The name, date and place are all united in this single object.”

Murphy’s presentation and the ground project led Hopkins to consider the relationship between the material landscape and stories of violence, as well as how our bodies process memory.

“Memory relates to time in a strange way. It is believed that memories are strongest when events are most recent, and that may be the case. But the public expression of memory takes a very long time,” Koerner explained. “Murphy pointed out that in Germany, half a century really must have passed before Holocaust monuments were built. It has something to do with how people process violence, how people process guilt, how people process feelings of anger and grief.

“If we don’t have a mode of analysis for this story – the kind that the Monument Lab has created with its National Monument Audit – we won’t be able to have the kind of calculation that monument debates now demand of us, “, added Lewis.

Ultimately, Koerner and Lewis said they hope the course leaves students with meaningful connections and inspires them to make meaningful changes in the future. Students like Aziza Izamova, holder of an HAA doctorate. student, said the course gave students an opportunity for action.

“I think it’s a fantastic opportunity to see how things can be done. Even if we don’t get it done in the next five years… it might take 10 years for your project to get done,” Izamova said. “It’s a great opportunity for us to start thinking about it now.”