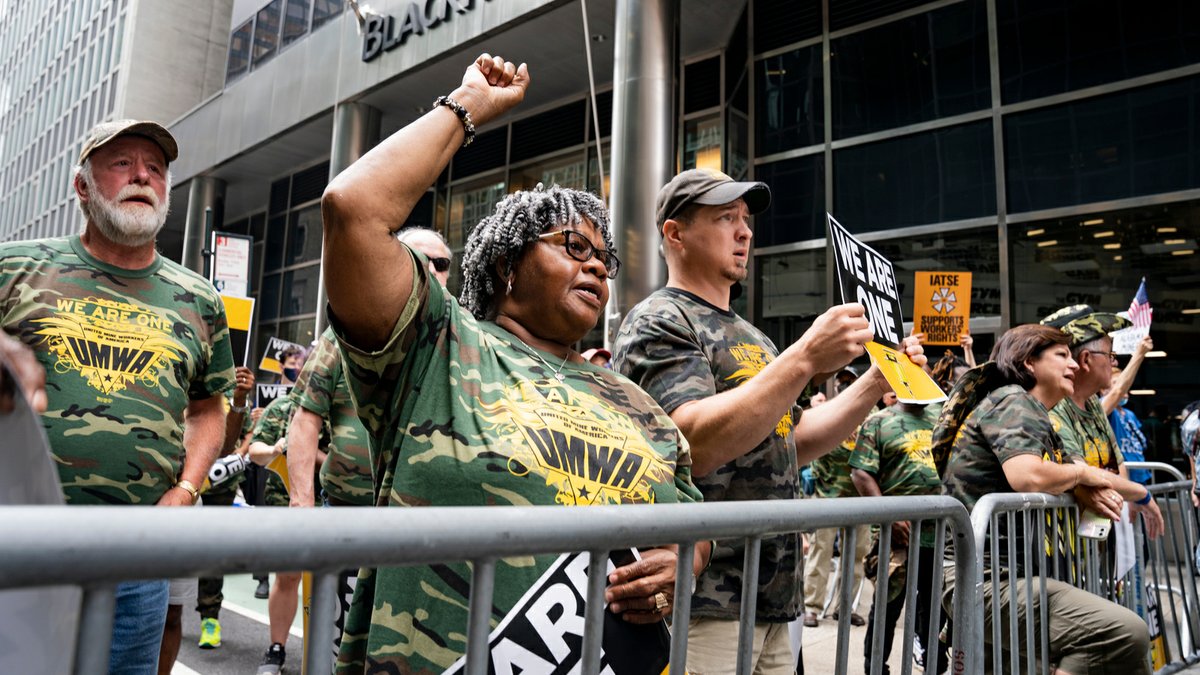 Fighting the Good Fight: An Interview with Kim Kelly

Not since opening the pages of a worn copy of Howard Zinn A People’s History of the United States did I read a book on a subject I thought I knew a lot about, only to learn that I knew next to nothing. Journalist Kim Kelly Fight Like Hell: The Untold Story of American Labor is a fantastical ride that delves into the characters that created the labor and union protections we have today.

In just over 300 pages, Kelly expands the known universe of labor history by taking on fascinating but little-known characters like Ida Mae Stull (“L’Amazone des Charbonnières”) and breathe new life into their stories. Kelly recently spoke with The Progressive about her book, the research that went into it, and the current labor and union revival.

Q: please explain Fight like hell in your own words.

Kim Kelly: I see Fight like hell as the labor history of a marginalized people in the United States. It focuses specifically on the stories and struggles of people who have been excluded from this idea of ​​the American dream and pushed to the margins of labor history and history in general. It primarily focuses on women, people of color, queer and trans workers, disabled workers, immigrant workers, sex workers, incarcerated workers, and probably a few other crossover identities. I tried to write a book about all the people I was interested in.

Q: Even though unions and work are an integral part of our history, we learn almost nothing about them in school.

Kelly: Yes, I grew up in the middle of nowhere. I never even went to college. I’m still not quite sure what it is. I just heard about it by osmosis because I went to a small brick school that looked like a kindergarten until eighth grade, all in the same building. And we weren’t very well funded and certainly weren’t progressive. So everything I learned about unions before I joined was basically from my father and my grandfather.

Q: Do you have a union family?

Kelly: Oh yeah, I’m third generation, which is a pretty great privilege to be able to say at this point. My grandfather is a steelworker, my grandmother is a teacher, my other grandfather is a construction worker, as well as all my uncles and my father. I wouldn’t even call them blue collar. Like, I don’t think anyone in my family ever wore a necklace.

Like, I don’t think anyone in my family ever wore a necklace.

Q: The mainstream media devote far less airtime to labor and labor issues than to, say, politics. And when they cover unions, as your book points out, it’s often dismissive. Why is that?

Kelly: Labor history is the most interesting history imaginable because it is the history of people. Everyone has had a job or will have a job, or is probably about to work right now. [Working] is one of the most universal experiences. So every type of person is involved in it. It’s crazy to me that this work, for a very long time, was consigned to the dusty pages of the business section. [They assume] there’s nothing sexy or cool or interesting about it. And the job is totally sexy. You need to go out and talk to people instead of analyzing them to death.

Q: Even the separation between workers in the private and public sectors, the mainstream press treats as if it were a completely different entity. As if there were unionized workers and then other people.

Kelly: That’s why I only read articles about work written by people as broke as me. This is where you get the real story. I think a lot of people get [these stories] now a lot more than they did, but there’s still that kind of golden “expert” type of person who takes advantage of a union without thinking of themselves as a worker or a member of a union. And they get all the attention, but fuck those guys.

Q: The media treats the Starbucks organization as an oddity, basically because they’re not, say, steelworkers.

Kelly: It’s not just white people with helmets. It is this kind of exclusionary rhetoric that has arisen throughout the history of labor in this country. Right now it’s this fictitious blue-collar versus white-collar opposition, but it used to be women. Before, they were black workers. It was – well, I shouldn’t say it was because it’s America, but it was transferred to Latinx immigrants.

There has always been someone, a group of workers who have been considered unorganizable, or undeserving, or somehow not in need of union protections because they don’t fit not this specific avatar of what a quoted union member should look like. And it’s always been bullshit because, look at my book, there’s about 300 million pages of people who don’t fit that description but who changed the world.

Q: As a progressive journalist who has covered Labor and as a history reader, I thought I had a good idea of ​​Labor history. You have Haymarket and Matewan but other than that it’s dry and boring, if any.

Kelly: You have to put blood, guts and heart into it, because it ultimately comes down to people’s stories and experiences. At the end of the day, these are people telling you about their lives, what they do to get by and try to make things a little better. I mean, even thinking back to the courage of people like the Jackson washerwomen who, in 1866, a year after emancipation, founded Mississippi’s first labor organization because they weren’t being paid what they deserved. Or the women who went on strike in 1824 in Pawtucket, Rhode Island – textile workers who said “no, it’s not going to fly”.

Q: I think most people have an idea of ​​the labor history that starts with the Triangle Shirtwaist factory fire, then jumps to Jimmy Hoffa, then fizzles out.

Kelly: There are big hot spots. And I write about a few of them in the book because, you know, there are always different angles to explore and different people to spotlight. But I was really interested in finding out about events and people I had never heard of.

Q: How much did you have to dig for these stories?

Kelly: I had all these big plans to go visit archives and libraries, to travel and to sit down and do all these interviews. I couldn’t do it, obviously, because the pandemic made it impossible. So I spent a lot of time reading books, going to the library, digging through J-STOR and all those weird college sites that my friends were connecting me with.

Some chapters were easier than others because some professions and some stories are much more documented. I had no problem discovering new and interesting information about Clara Lemlich or the 20,000 uprising, because we know it. But [to cover] some of the women like Rosa Flores, who was deeply involved in the Farah factory strike, I found her in a footnote in someone else’s book and thought she was interesting and I must have spent years trying to dig it up. It took me six weeks to do a chapter [on] incarcerated workers and prison labor because there is so little documentation. I had to really dig and get creative, but it was a lot of fun, it was like a treasure hunt.

Q: Labor also has a bloody history, but not one that Americans usually like to read. It’s not battles with generals and maps, but it feels like you made it interesting.

If such a huge and impactful union uprising could be effectively suppressed, what else are we missing?

Kelly: Yeah the fact that kids don’t know about the battle of Blair Mountain there’s been a whole concerted effort to bury that history and keep that history away from young people and erase the impact that those workers had and the struggle has had. And, if such a huge and impactful union uprising could be effectively suppressed, what else are we missing? What else are they hiding from us? How is there not a Lucy Parsons biopic? Talk about a fascinating and nuanced person.

Q: Why write this book now?

Kelly: I was kind of lucky because I started writing this book at the start of the pandemic, and I was able to absorb the events happening and unfolding all around me. Just as the essential worker talk was kicking in, I started researching domestic work, janitorial work, and farm work. I was researching these things because we see people dealing with them, in increasingly controversial ways, in real time.

As this idea of ​​the “great resignation” arose, I wrote about the mass strikes. And I spent the whole year covering the Warrior Met Coal strike in Alabama. So all the time I was going back and forth to Alabama from Philly. I started from my research and the writing of the book to go to the heart of an active workers’ struggle. I was able to absorb that energy and that momentum and all of those emotions as they happened. And now the book comes out at a time when people seem more excited about the work than ever, especially on the backs of the Amazon union and Starbucks’ organizing campaign. And I hope that when my book comes out, people pick it up and find inspiration in its pages to keep fighting like hell.

Q: Who did you most enjoy researching and writing about?

Kelly: Oh my God. There are so many. There are a few people I couldn’t even fit properly into this book that I had to delve into later in a series of columns I did for The nation– shout at Marie Heaton Vorsemy favorite union reporter.

As for the people I stumbled upon, I was so fascinated by Ida Mae Stull. She was a woman who worked in the coal mines. She was part owner of a small mine just outside her hometown. She loved her job. She and her husband worked side by side and everything was fine until the mines inspector showed up. They said, “Oh, you’re a woman. You can not do this. You have to go back to the kitchen. We have a literal law that says that, so you’re out of luck.

And she didn’t have that. She went to court and she fought and she got her job back. She got the right to go back down into the mines and do the work she loved. She was so tough I would love to read an entire book about her or see a biopic.

Q: You wrote that Ida threw eggs at the mines inspector?

Kelly: Yes, she threw rotten eggs at the mines inspector to get him out of there. She just seems like she would have been an amazing person to have a drink with. And that’s what I look for in a subject of history. Like, would it be fun to hang out with you and hear you talk shit? And I’m sure Ida Mae could still say a lot of crap.