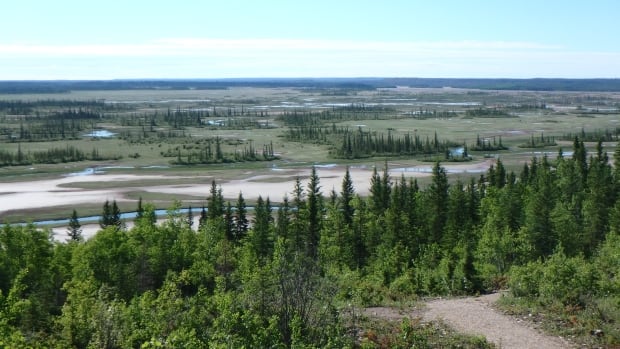 An essay contest created by a First Nation in northern Alberta aims to teach young people about the weighty history of Wood Buffalo National Park on its 100th anniversary – and ensure the next generation remembers it that happened to his people.

The contest asks youth ages 16-21 to write an essay or poem, or use a video or other media, to discuss the story of the eviction of the Athabasca Chipewyan First Nation from Wood National Park Buffalo.

The park was established in 1922 to protect the last herd of wood bison. Straddling the Alberta-Northwest Territories border, Wood Buffalo is Canada’s largest national park and a UNESCO World Heritage Site.

This summer it was visited by UNESCO investigators who were investigating whether it should be added to a list of World Heritage sites in danger due to environmental threats, including plans to dump tailings sands bituminous products processed in its catchment area.

Last year, the ACFN released a report outlining the history of the park’s establishment, which included the eviction of First Nation members. In some cases, people’s houses were burned down.

Kg Banjoko, government relations coordinator for the ACFN, said the First Nation was “obviously not interested in celebrating” the park’s 100th anniversary.

“We wanted to hold this competition to challenge the history of the park which is painted is something amazing and good for Canadians, but the First Peoples of this land have been moved,” Banjoko said.

She said it was important for the First Nation to ensure history is not lost.

“It’s important for young people to know about this issue, talk about it, understand the intricacies of colonialism and the very real impact felt by a community,” Banjoko said.

To date, there have been 10 submissions – essays, spoken word, poems and artwork – mostly from Fort McMurray students. The ACFN is trying to work with local schools to involve more students.

Daelynne Stevens, 18, submitted an essay. During the writing process, she discovered her family’s roots in the area and the story behind the park.

“I had no idea all of this happened,” said ACFN member Stevens. “Once I did, I could see the effects even today.

“I’ve always recognized that the park has ecological significance, but as it’s under scrutiny as well as the treatment of people in the park’s neighborhoods…it makes me a little wary.”

Stevens’ great-great-grandfather was chief of the First Nation when the park was established, something she didn’t know until she began her research.

She would like to see a proper apology and reconciliation from Parks Canada.

According to the leader of the ACFN, Allan Adam, young people discover knowledge about the past.

The contest encourages children to go out and do their own research to find out what happened to ACFN members.

“Wood Buffalo National Park has not released access to the ACFN,” Adam said. “We want to educate people.”

Adam said the federal government wanted to work with UNESCO and tourism, but members didn’t have the same access as before.

“Give us a letter saying you apologize and allow us to return to the park to use the traditional lands that were taken from us,” Adam said.

He said members cannot hunt or trap in the area and ACFN members have not been able to take advantage of park resources.

Adam’s grandmother was removed from the park when she was 21. “They burned down his two-story house,” Adam said.

The relationship between the First Nation and Parks Canada is slowly improving, he said. But one of the first things he wants to see is a written apology.

The competition ends on September 30, National Day of Truth and Reconciliation. The winner will be announced in October.

The top 10 submissions will be featured on social media and the ACFN website.

2022-09-24
Previous Post: The enduring power of Ramses the Great
Next Post: Generals fly over hornets in straight sets