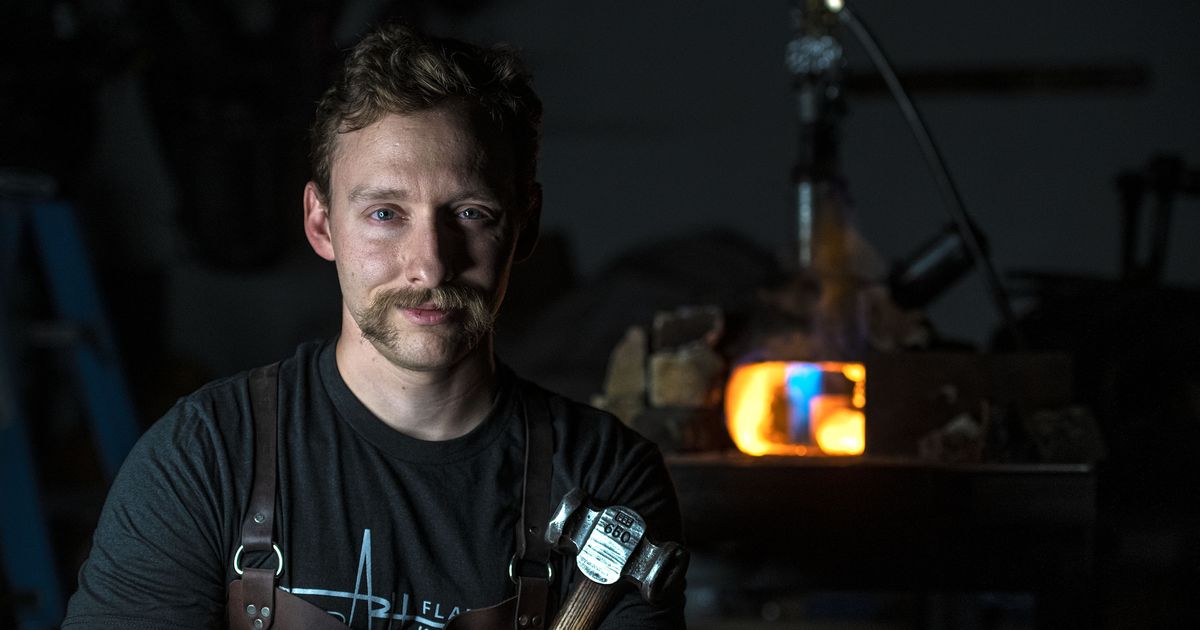 Stepping into the heat, Spokane firefighter Andrew Hall had to be ready for anything.

He can remember how he had contingencies over the contingencies that came before the moment, his mind running “at a million miles per minute.”

Fortunately, it wasn’t an emergency that had put Hall on his guard this time.

Rather, it was his appearance on the TV show “Forged in Fire”.

The History Channel program pits four steelworkers against each other in a knockout style competition for a prize of $ 10,000.

Hall won silver and the league title “Forged in Fire” in his episode, aired on July 14. The final round, which requires competitors to make a historic weapon from scratch, tasked the 33-year-old with making a 32-inch Walloon sword, a 16th-century European blade with a distinctive hilt.

Until then, Hall had no idea what he should do and how he should do it – one of his biggest challenges to come in the series, he said.

“My job is to stay ahead of the eight ball, to anticipate and plan ahead and be ready for what’s to come,” Hall said, “so trying to translate that into this work – do X so I can get to Y – I would like to be ready and not chase my tail.

Blade forging is a passion for Hall, who lives in Coeur D’Alene.

A native of Spokane Valley, Hall worked for the Spokane Fire Department for approximately four and a half years. He said he was hired by firefighters after about five years with American Medical Response.

His appreciation for survival tools grew out of his childhood as a Boy Scout. Hall said he took metallurgy classes in high school, learning to weld, use forging tools and other rudimentary blacksmithing techniques.

Hall also worked on practical projects with his father, Rustin, president of ALSC Architects of Spokane.

“What I like about it is that it uses its ability to create legacy objects, like a building. That’s not what I do. I work on people. I don’t work on. buildings, “Hall said.” But, I really like the idea of ​​doing something that’s going to outlast me. “

Hall volunteered with the area’s firefighters and ambulance service while attending the University of Idaho in Moscow, which he said set him on the path to a career. fulltime. As a result, Hall adapted his psychology degree to what he would use in the field.

Although he had no tools for forging knives during his studies, Hall said he was able to draw and design blades which he ordered through Schenk Knives, a company in Idaho Falls. Hall then made the handles, sharpened the blades and made the cases before selling them, he said.

He honed his knowledge of the design process along the way, self-taught by forging YouTube videos, online courses and “trial and error,” he said. Hall has been making his own knives from scratch for the past five years, now working in his garage forge in his home in Coeur D’Alene.

And while his website Flatline Knives and the Facebook page showcasing his work, Hall said it was more of a brand for his creative outlet than a business. The scope includes customs for trade, family and friends, and knives for himself, including those he uses for hunting.

“Being able to create something that is both beautiful and functional is the ultimate goal of the artist or the creator, isn’t it? Hall said. “Make something like a Damascus chef’s knife that my mom uses every time she’s in the kitchen. It’s super cool for me.

Damascus steel blades are known for their distinctive wavy patterns. One of his favorite blacksmithing techniques, Hall said his goal when entering “Forged in Fire” was to hit the last turn and do something Damascus style.

He would have his chance, but not before some uncertainty due to the COVID-19 pandemic.

Hall said he responded to the casting call in early 2020, which involved an interview, drug test and assessment of his forging work. At the start of COVID-19, Hall said he spent more than a year wondering if “Forged in Fire” was even going to make another season, let alone recall it.

When he finally got the call, Hall took off to face three other players from across the country.

“Super stressful. Very funny. Totally rad experience. The guys I competed with were great craftspeople. We had a really good time together, ”said Hall. “That’s one of the things that I find really cool about the show, is that it looks a lot like the way you see it on TV.”

Each round of “Forged in Fire” is timed. Hall only had a few hours in the early rounds to craft a bowie knife from the show’s smithy, while the final round gave him four days to craft his Walloon sword out of his garage.

Weapons from the second and third round undergo a series of tests to assess aspects such as strength and sharpness. In Hall’s case, the durability of his Walloon Damascus sword was tested against a medieval-style wooden door.

“The clock is real,” Hall said. “The three-hour deadline (for the first round) is no joke. The two-hour deadline for the second round is no joke. And then the test is brutal and it’s real and it’s noisy. You can feel it. You forget you’re on TV, quite frankly, because you’re so focused on what’s going on.

“I’m only scratching the surface”

Hall celebrated the victory with family, friends and supporters during a watch party at MAX in Mirabeau.

Since the show aired, Hall said he had received an increased number of social media posts from people in the knife-making community asking him questions about different aspects of his trade.

“It’s a great melting pot of experience levels – and I love it, because I’m still learning and teaching someone else,” he said, “and the idea that people want to learn from me blows my mind a bit, because I feel like I’m only scratching the surface of what there is to learn, but we’re all getting better and better. each other.That’s what is so fun.

As for the prize money, Hall said he spent some of it forging materials and set aside the rest for his family. He, his wife Kate and their daughter Evelyn have gone on the trip and are planning another one in the near future, Hall said.

“I can only do this because the people who support me are taking over,” Hall said. “I spend a lot of time in the garage working on these projects and sometimes I miss time with my family. Finding this balance is important, and my family gives me a lot of grace. I couldn’t do it without them.

The most common question Hall said he has received since appearing in “Forged in Fire” is whether he was able to keep the Walloon sword, which Judge Doug Marcaida described on air as “a centerpiece “.

“They guard whatever you do,” Hall said, “and one of the hardest parts of the show wasn’t keeping my sword.”

The second most common question: would he ever do it again?

“Forged in Fire” has produced episodes with returning champions in the past. For now, Hall has said he probably would need to be convinced to come back, as he is “pretty happy with how everything turned out.”

But if the series ever decides to bring back its “Beat the Judges” spin-off, which saw the judges of “Forged in Fire” take on returning champions in a six-episode series in 2020, that’s another story.

“I am part-time. I do it for fun. I would use this opportunity to learn as much as possible from a master blacksmith or master luthier, ”said Hall. “For me, I don’t see a losing scenario out there.”