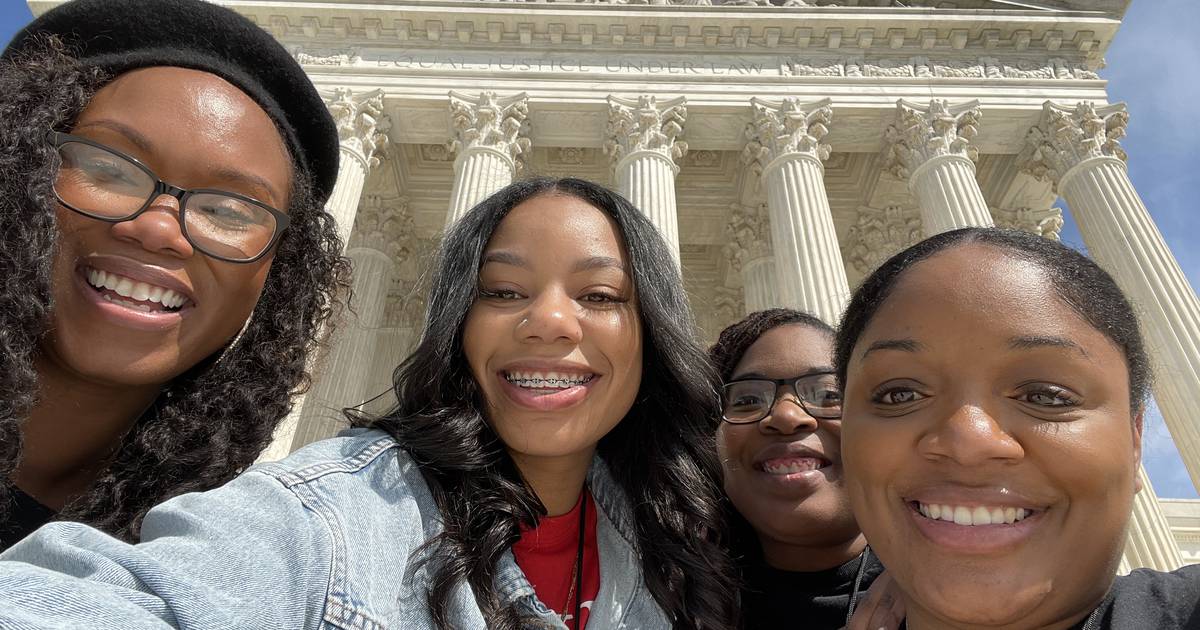 At a yard sale in her native Texas, she bought all of a retired lawyer’s law books for $15.

“I had an entire law library when I was 8,” Saunders said. “However, over the years, I realized that few lawyers look like me, because there are very few black women in law.”

Saunders, Totiana Sudduth, Toni Bailey and Jessica Fullilove attended the ‘Have Her Back Day of Action’ rally in Washington DC in support of US Supreme Court nominee Justice Ketanji Brown Jackson. The four women are third-year law students at Northern Illinois University affiliated with the National Black Law Student Association, which organized the all-expenses-paid trip.

More than 100 students from more than 30 universities participated in the rally which was held on March 21-22. It was organized by Demand Justice and the National Black Public Defenders Association.

President Joe Biden has nominated Jackson to become the 116th Associate Justice of the United States Supreme Court. Jackson, 51, has served as a federal judge on the United States Court of Appeals for the District of Columbia Circuit since 2021. Confirmation hearings concluded last week and a vote is expected in April.

“Of all lawyers in the United States, about 5% are black, and of that percentage, about 2% are women, and one woman out of that 2% is appointed to the Supreme Court,” Bailey said. “That’s why it’s so important. We need to increase that number and show other black men and women that they can sue, that it is possible.

Saunders said a humorous moment during the rally occurred when a young boy approached the group and asked if they personally knew the judge.

“I’ve never felt so proud or inspired by someone I’ve never met,” Saunders said. “When we read legal cases and see perspectives, none of the judges are like me. When I was in DC, I could wake up, look in the mirror and know that we are one day closer to having a Supreme Court justice who looks like me.

Law students have said that looking at Jackson, they see their mother, their aunts and their future selves.

Fullilove said representation on the Supreme Court is important, particularly because it is the highest federal court in the land. Fullilove said she was inspired to become a lawyer by former First Lady Michelle Obama, a graduate of Princeton University and Harvard Law School.

“Michelle Obama is from South Shore, and I’m from Englewood, and I realized if she can do it, why can’t I?” said Fullilove. “However, there has never been a Supreme Court justice like me. She has my experiences, my perspectives. It’s so connected to me. It’s important to let her know that we support her, we support her. We will advocate for her to be held accountable. Her appointment means a lot to people of color.

Fullilove, who is also the Midwest Region Chairman for the NLBSA, helped organize the event and was able to attend the March 24 confirmation hearing in person, where Sen. Cory Booker, D-New Jersey, gave an impassioned speech.

“I want to tell you, when I look at you, that’s why I get emotional,” Booker said during the hearing. “I’m sorry, you are a person who is so much more than your race and gender. You are a Christian. You are a mom. It’s hard for me not to look at you and see my mom. I see my ancestors and yours…. You have earned this place. You are worthy. You are a great American.

“Tears came to my eyes after his speech,” Fullilove said. “It made me cry. It moved me and filled me with a sense of pride and a sense of belonging that I can’t explain.

Sudduth said being in Washington, DC was a surreal experience she won’t forget and one she already loves telling her 4-year-old daughter about.

“A lot of people don’t understand what it means to us to be there, to be a black woman in law and to see this happen, to see history unfold right in front of us,” Sudduth said. “It’s something you read about in the history books. It’s something I will tell my daughter and one day my grandchildren. The feeling of being there in person is an indescribable feeling and so significant.

Fullilove said that as a law student, she constantly reads legal cases.

“I read many cases, and one day, [Jackson’s] the decisions will appear in my law books,” Fullilove said. “It’s phenomenal and prolific. Her appointment is historic as she will be the first black female Supreme Court justice – but she won’t be the last either.