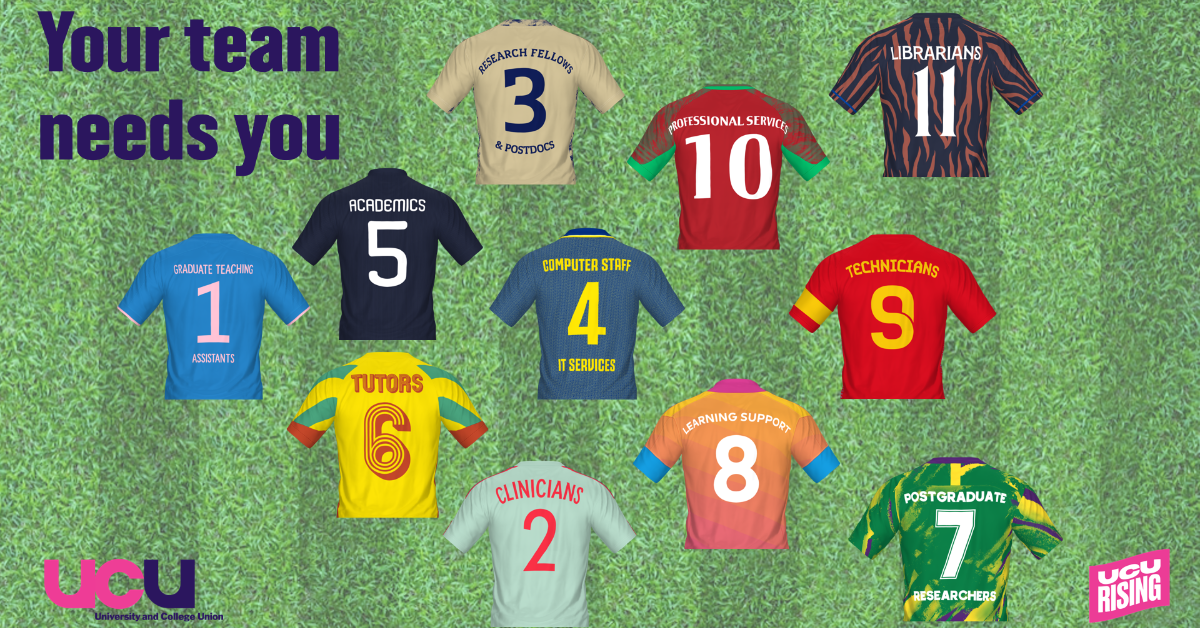 Next week marks the start of the UCU nationwide strike in higher education. 150 universities across the UK are due to pull out on November 24, 25 and 30. Despite management’s attempts to intimidate and intimidate our members with threats of payroll deductions for participating in ASOS (action short of strike), our members are prepared to stage the largest picket lines in the history of Higher Education.

On Wednesday, November 23, Jo Grady will host a UCU Live pre-strike event on Youtube, Facebook and Twitter. Please invite all your colleagues, students, friends and family.

On Thursday 24th and Friday 25th November the members will immobilize all universities in the UK. Join us at 10:30 a.m. on Friday, November 25 on Zoom for our virtual picket line.

There will also be a joint UCU/EIS-ULA strike rally at Glasgow Friday, November 25. Meet at 12.30pm on the steps of the Glasgow Royal Concert Hall at the top of Buchanan Street, Glasgow.

On Wednesday, November 30 at 1:00 p.m., we ask all branches across the country to come down to Kings Cross in London for largest national gathering in UCU history. Contact your reps for plans for coaches transporting members, students and supporters to the rally.

There will also be a UCU strike rally in Scotland at Edinburgh Wednesday, November 30. Meet at 12:30 PM for a 1:00 PM departure from the Lobby of the Scottish Parliament, Edinburgh. Speakers include: UCU Scotland; STUC General Secretary Roz Foyer, NUS Scotland President Ellie Gomersall; and MSPs.

Newham College UCU members have voted to accept a deal, which will see a consolidated pay rise of 8% for staff earning up to £25,000 and a consolidated pay rise of 5% for qualified teachers and program managers (2.5% increase retroactive to September 2022 and an additional 2.5% to be paid from January 2023). The deal also includes an unbound lump sum of £600 for staff earning more than £30,000 and £750 for those earning less than £30,000. This agreement was reached through effective and meaningful negotiations with the management of Newham College and shows that there is money in the continuing education sector to help staff through the cost of living crisis.

UCU members at Sheffield College are currently voting for industrial action on wages and working conditions. Voting opened on Friday 11 November and will close on Thursday 8 December. Meanwhile, UCU members at Darlington College and Furness College voted to strike and beat the anti-union threshold (Darlington: 95.2% “yes” out of a 56% turnout; Furness: 84.6% “yes” out of a 60% turnout).

Strike action at Barnet and Southgate College scheduled for Wednesday, November 16, has been suspended to allow talks to continue. Staff have already gone on a three-day strike over a dispute over excessive workload and management’s meager 2% pay for the previous two years (1% 2020-21 and 1% 2021-22) . To allow time for further discussion, UCU members agreed to suspend the planned strike. Further action will be called if an acceptable agreement is not reached.

Strikes are suspended at the University of Sheffield International College

Strike action expected this week at the University of Sheffield International College was suspended to allow further consultation with members. Strikes were due to take place on Thursday 17 and Friday 18 November, but the employer made new offers, which the union is now submitting to the members. It is now up to the members to determine the next steps, but if the offer is rejected, industrial action is still on the table for: Monday 28th, Tuesday 29th and Wednesday 30th November.

Birkbeck threatens to lay off 140 employees

UCU slammed Birkbeck, University of London plans to lay off 140 staff this academic year, comprising up to a quarter of the teaching staff and up to a third of the administrative staff. UCU has pledged to fight the cuts, which it says are a disaster for students and the university, and threaten potential industrial action. Please click here to email Birkbeck Vice Chancellor David Latchman and the Board of Governors oppose their plans. The link provides you with a draft text; you can just add your name at the end but it will be more effective if you personalize the message. (If you are having trouble opening the draft email

Please visit this page for all local disputes and wins in all sectors represented by the UCU.

We are hosting a number of “teaching” sessions at the next Higher Education Industry Action in November. These short, interactive 90-minute online workshops are part of UCU’s Continuing Professional Development program and are open to all UCU members in all sectors. We hope you find something in the list below that interests you and also hope that you can promote the sessions to your colleagues. Each link below takes you to a registration page with more information about each course.

In time for COP27 in Egypt, Mock COP and UCU released a new movietitled “The Climate Crisis: A Crisis in Education”, highlighting the impacts of the climate crisis on students, pupils and education staff. The film is available on the UCU YouTube channel.

UCU Climate and Ecology Emergency Committee held their first formal annual meeting on November 10. Members passed 7 committee motions and a new committee was elected. A report of the meeting will be distributed shortly.

The National Union of Students (NUS) this week released the results of its investigation into the cost of living crisis. It reveals that 42% of UK university students live on £100 or less a month, and the mental health of 9 in 10 students is affected by the cost of living as trust in government falls to an all time low. You can read USN press release and The UCU response.

The Equality Trust’s toolkit for achieving equal pay in your workplace has been created to help workers and union representatives tackle unequal pay in their workplace by looking at policies and practices that lead to this inequality. The toolkit explains what equal pay is, how it intersects with the gender pay gap and why issues arise in the workplace. It offers help with talking about pay, adapting policies and conducting (horizontal) equal pay audits. Check out the toolkit and use it to solve the problems you and your colleagues are having.

The Scottish Trades Union Congress (STUC) has announced details of the Annual St. Andrew’s Day Anti-Racism March and Rally, which will take place on Saturday, November 26, 2022. This is a crucial year for the fight against racism. The Sheku Bayoh Family Justice Campaign needs our continued support; the British government’s racist immigration policy and rhetoric is only getting worse; and we face a cost of living crisis and wage attacks that disproportionately affect black workers. Meet at 10.30am on Glasgow Green, march at 11.00am, with the rally at 12.00pm at the Renfield Center in Bath Street, Glasgow.

2022-11-19
Previous Post: Portugal Eye History as Ghana hand over rematch to Uruguay, South Korea could surprise
Next Post: NS wants to acquire one of the most contaminated gold mining sites in the province, but it’s complicated