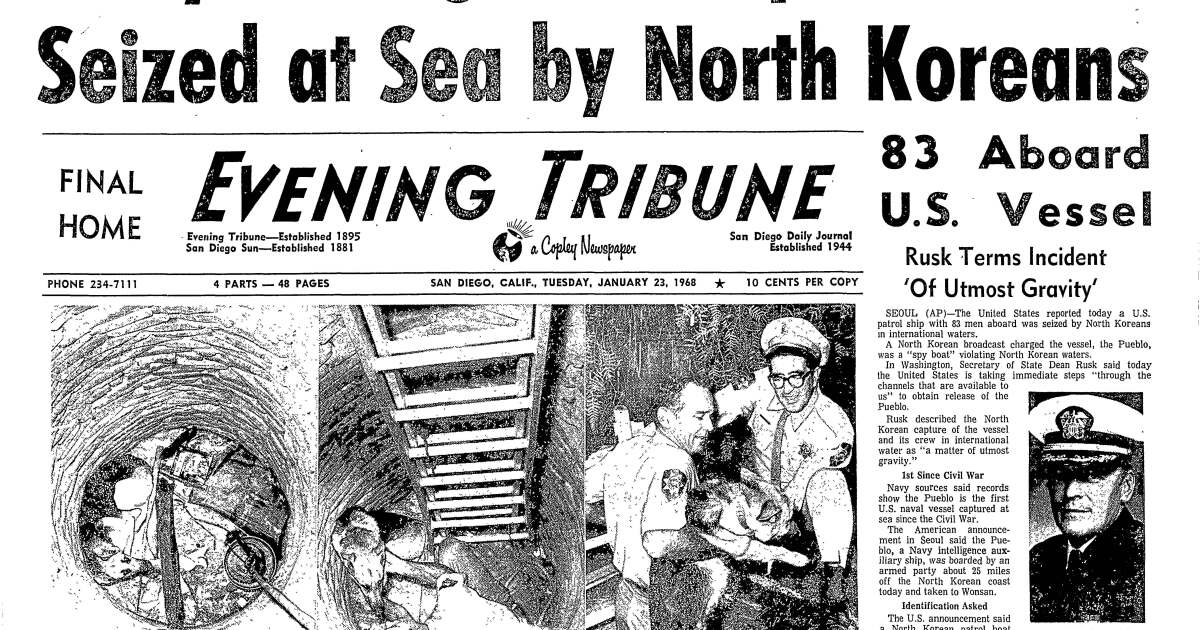 From the archives: January 23, 1968: USS Pueblo seized by North Korea

On January 23, 1968, a small US Navy ship called the Pueblo was seized at sea by North Korean forces. One crew member was dead and 82 others were prisoners, destined to spend 11 months in North Korean captivity.

Rose Bucher, wife of Pueblo Captain Cmdr. Lloyd “Pete” Bucher, heard a report of the ship’s seizure while watching a news program at the Bahia Hotel in San Diego, where she was staying with her two teenage sons.

Shortly after, reporters tracked her down to the hotel.

Rose Bucher quickly gained national notoriety in an effort to keep the attention on the Pueblo incident and the fate of the ship’s crew.

The self-described shy Navy wife has gone public. She organized and organized a campaign to win the release of the Pueblo crew, appearing on television and speaking to veterans groups across the country.

On Christmas Eve – after 11 months in captivity – Cmdr. Bucher and the Pueblo crew returned home.

Pete and Rose Bucher shared a home in Poway until his death in 2004. Rose Bucher died in 2013.

“I was sitting in a chair, listening to the radio. The announcer started talking about the seizure of an American ship by the North Koreans.

“I listened and wondered if it could be the Banner, a sister ship to the Pueblo.”

“I shouted ‘Oh my God.’ And then I sat down and cried.

“Then I started to pray.”

These are the words of Mrs. Rose Bucher, whose husband, Lloyd, a naval commander, is at the head of the ship seized by the North Koreans.

I came here on November 2

This morning she hadn’t received any official news of the Pueblo’s capture, but she didn’t doubt the story.

‘I am now worried about the safety of the crew,’ she said as she spoke today from her temporary home at a hotel in Mission Bay. “I’m sure the Navy is doing everything they can, but I can’t help but worry.

“I keep praying and I keep hoping.”

Ms. Bucher came to San Diego from her home in Jefferson, Missouri, with her husband when the Pueblo was assigned here for a four-week cruise after commissioning from Bremerton, Washington.

The commander, 38, has been posted there several times. After commissioning at the University of Nebraska in 1953, he served aboard the flagship of the Mt. McKinley Amphibious Force, based here. He then toured aboard three San Diego-based submarines – the Besugo, the Caiman, and the Ronquil.

The Pueblo is Bucher’s first command.