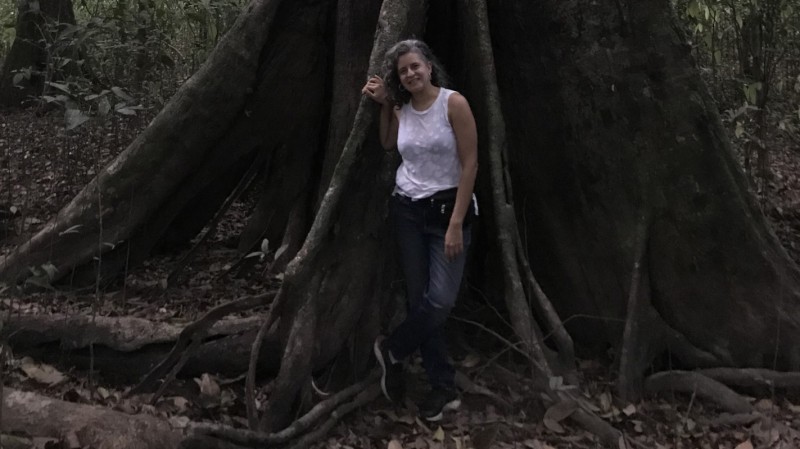 Giovanna Montenegro, an associate professor of comparative literature at Binghamton University, first became interested in Guyana and its neighbors while gazing at a majestic flat-topped mountain called a tepui.

Three South American countries meet at Mount Roraima: the native Venezuela of Montenegro, Brazil and the small coastal country of Guyana. The Guiana Shield, as the region’s geological formation is called, encompasses parts of Colombia, Venezuela, and Brazil, as well as Suriname, Guyana, and French Guiana.

A rainforest ecosystem, it has one of the greatest biodiversities on the planet. Equally impressive is its human diversity, even though the region is little known in the United States. Montenegro, also director of Binghamton’s Latin American and Caribbean Studies program, was herself a bit perplexed during that visit in 2008.

“I was really puzzled as to why the border was on top of that mountain,” she said.

She finally had the opportunity to see the region from across Roraima — the Guyanese side — when she traveled to the region last fall. Selected as a Fulbright US Scholar for 2022-2023, Montenegro will see even more of the Guianas and Suriname on several short trips to the region over two years

Montenegro conducts research for her second book; his first, about the Germans who colonized Venezuela in the 16th century, will be released in December via University of Notre Dame Press.

“Basically, the project is about how this whole region of the Guianas has been historicized and represented as a kind of utopia with unlimited natural resources, including gold,” she explained. “Part of the project encompasses how Indigenous and Maroon communities in the region use resources such as colonial maps to determine the boundaries of their ancestral territories.

In preparation, she is currently spending a month at the Newberry Library in Chicago as a short-term fellow at the Center for Renaissance Studies to address the historical aspects of the project. Independent research library features one of world’s largest map collections, Montenegro says; she spent a week there last fall, as well as at the Library of Congress, before her first trip to Guyana and Suriname.

Suriname is Montenegro’s first Fulbright destination. Although adjacent to Brazil, the country and its immediate neighbors – Guyana on the left and French Guiana on the right – speak neither Spanish nor Portuguese. French Guiana is still an overseas colony of France, while Guyana was colonized by the British; Suriname was colonized by the Dutch. The people of the region are multilingual, many speak Dutch, English and the national creole, known as Sranan Tongo, as well as other creole and indigenous Maroon languages.

“Suriname is a place where, after the end of slavery, indentured laborers came from Indonesia, where the Dutch had colonies. And then indentured laborers from present-day India were also brought in, just as they were in Guyana and the British Caribbean, as well as Chinese workers. It’s a very diverse population,” she said.

Suriname is also home to six maroon populations, who are the descendants of former slaves who escaped slavery and built thriving communities in the forests. Maroon communities – the largest of which is the Saramaka along the Suriname River – have their own legal structures and languages.

During a sabbatical in the fall of 2021, Montenegro traveled along the Upper Suriname River to the village of Pikin Slee to meet Chief Wanze Eduards, who won the 2009 Goldman Environmental Prize with the lawyer Hugo Jabini for their efforts to stop logging and mining on their ancestral lands. Under their leadership, the local communities created the Association of Saramaka Authorities, which filed a petition with the Inter-American Commission on Human Rights.

The tribunal ruled on behalf of the ASA and the Surinamese government agreed to implement the tribunal’s judgment in 2008. Montenegro wanted to know what had happened since then, she said.

Indigenous and Maroon communities in the area are vulnerable due to the wealth of timber and mineral resources, including gold and bauxite. Offshore oil deposits pose a different threat, especially since the wealth derived from these resources is often not shared with local communities.

However, participatory mapping – a process that makes visible the association between land and local people – has given indigenous and maroon communities a new set of tools to safeguard their environment and culture. The process uses both historical maps and new mapping technologies as well as the oral history of the culture to defend land claims, she explained.

Colonial-era documents can show where and how specific communities lived, including their territorial boundaries, the resources they had access to, and when or how those resources were taken away, she said.

“Above all, I want to see how these colonial documents are reused in innovative ways by indigenous and Maroon communities to fight for their ancestral lands,” Montenegro said. “I think it speaks to larger issues here in the United States and Canada regarding Indigenous claims.”