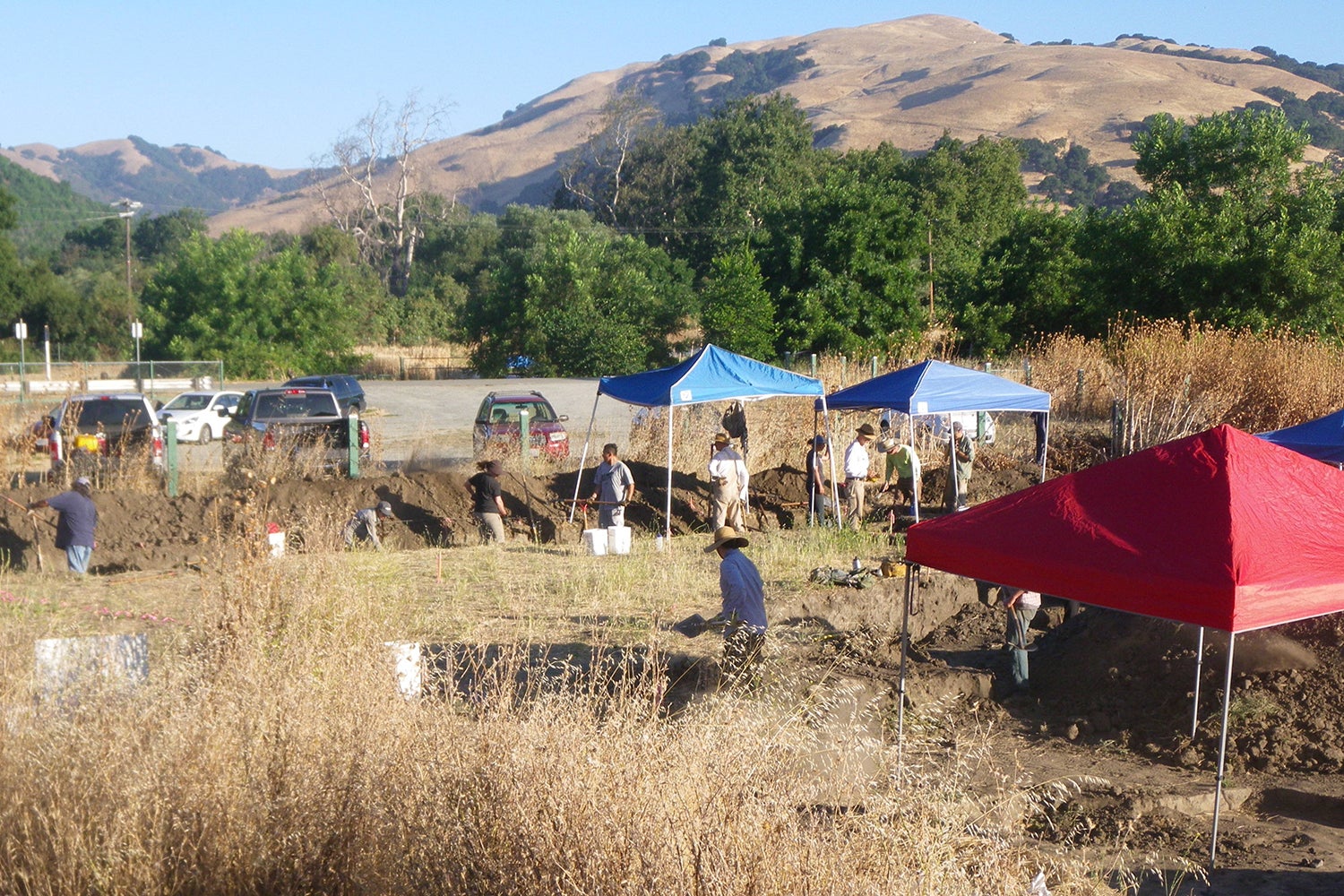 A new genetic comparison study between ancient people buried east of San Francisco Bay and modern members of California’s Muwekma Ohlone people supports the tribe’s claim – backed up by family histories, government records and archival records of the Spanish Bay Area Missions – that they and their ancestors lived in this area longer than many archaeologists have estimated.

In 2014, the San Francisco Public Utilities Commission proposed the establishment of an educational facility near the water temple in Sunol, California. When it was determined that the site would likely uncover human remains, the Muwekma Ohlone tribe was contacted. The tribal council commissioned a survey of two settlement sites found in the territory, which date back to 490 BCE, or more than 2,500 years ago.

The tribe brought in the Far Western Anthropological Research Group, with senior archaeological researcher Brian F. Byrd, to lead the archaeological excavation, analysis and reporting in a collaboration with the tribe and the professor of Anthropology from the University of Illinois Urbana-Champaign Ripan Malhi to design a genomics project on the remains identified there. Researchers from Stanford University also joined the collaboration to analyze genomic data.

“This is a project with the participation of researchers and tribal leaders from start to finish,” said Noah Rosenberg, Stanford professor of population genetics and society in the School of Humanities and co-author of the item.

The results of this genomic analysis, published this week in Proceedings of the National Academy of Sciences, reveal a thread that connects ancient genomes and present-day Muwekma Ohlone genomes. This continuity affirms the beliefs of the tribe but was somewhat surprising from the point of view of researchers, given the impacts of European colonization and what is currently assumed about the diversity and movement of populations of people who lived in and around California throughout this time.

A site, which the tribe named Sii Tuupentak (Place of Water Site of the Round House – named after the Sunol Water Temple), dates from 1345 to 1850 CE and 76 people were buried there. The second site, called Rummey Ta Kuččuwiš Tiprectak (Lagoon Stream Site), dates to 490 BCE-1775 CE and contained burials for 29 people.

Stanford News spoke with three of the co-authors of this article: Rosenberg, Alissa Severson and Alan Leventhal. Severson was a doctoral student in Rosenberg’s lab during this work and is the lead author of the paper. Leventhal is senior lecturer emeritus in the Department of Anthropology at San Jose State University and ethnohistorian and archaeologist of the Muwekma Ohlone tribe.

Why did the tribe initiate these genomic studies?

Leventhal: Recommendations for ancient DNA studies were part of the tribe’s reclamation of their ancestral heritage sites, but also comprehensive monitoring. So rather than being an afterthought, or rather than just being placed in the acknowledgments of the various publications, the tribe was central to the research process.

Although left as a landless tribe, the Muwekma Ohlone never abandoned their tribal relationships or left their Aboriginal homeland of the San Francisco Bay Area. This is supported by Federal Records, Family History, and Marriage, Baptismal and Death Records from the three Bay Area Missions – through which lineages enrolled in the Tribe can trace their ancestry back to their native villages. .

The biological continuity that the Muwekma Ohlone attempt to demonstrate challenges what some archaeologists have published without convincing evidence. For example, anthropologist Alfred Kroeber erroneously declared the tribe extinct in 1925. Then, more recently, the archaeological community published that there were no Ohlones in the Bay Area before 500 CE or, in some cases before 1500 BCE. This obscurity raised the question: what evidence are they using? The tribe asked me, as one of their archaeologists, how to solve this problem and I told them that we had to do destructive analysis for dating and ancient DNA on the ancestral remains.

So, having no control over the results, they were happy with what we found. And, as a collaborating tribal entity, the Muwekma tribe validates itself in the eyes of the dominant society which practices the “politics of erasure”.

Rosenberg: One of the interesting aspects of this study is that it has convergent motivations. From the perspective of the genomics world, we are now at a time when genomic analysis of ancient DNA is becoming increasingly feasible – with the potential to test hypotheses about ancient migrations and genetic continuity between ancient peoples and people living today. The study advances methodology to examine ancient and modern relationships beyond specific implications for the tribe itself.

What types of comparisons have you made?

Severson: The oldest site Rummey Ta Kuččuwiš Tiprectak, were four individuals that we ended up using in the comparison. The most recent site, Sii Tuupentak site numbered eight individuals. The oldest individual we included in the genomic analysis was dated to the 1st century CE and the most recent to the 1700s. And eight modern individuals participated. That gives us all that time transect through the area.

First, we tried to collect all publicly available genetic information from other ancient and modern indigenous communities in North and South America. This helped to ask the big question about where our three groups of individuals stand in relation to all these other populations.

The second set of studies focused on individuals we sequenced and previously reported individuals from the closest regions of Nevada, Southern California, Mexico, and the Pacific Northwest. This allowed us to ask finer-grained questions about relationships. The final piece was to dive into the comparisons between the two ancient sites and the modern Muwekma Ohlone.

What did you find?

Then when we delved a little deeper, we started to see that the Nevada individuals, the Southern California individuals, and the Bay Area individuals all clustered separately. The fact that we saw this type of separate grouping that persisted over time suggested that they were distinct genetic groups.

Rosenberg: In the finer analysis, we saw a shared ancestry component between the two ancient sites – one much older than the other – and then observed that the same ancestry component was present in the individuals current Muwekma Ohlone. The component also exists in other people today, but it is a much higher proportion of ancestry in the Muwekma Ohlone than in, say, the populations of Mexico or the southwestern states. -United. This therefore suggests the continuity of this part of the genetic ancestry from one ancient site to another and between the two ancient sites and the present day.

How do these findings challenge any assumptions researchers might have had about Muwekma Ohlone’s continuity in this area?

Rosenberg: From tribal oral histories and their understanding of their relationship to this place, the meaning is that their ancestors had been in this place for a very long time. But due to the disruption of the mission period, as well as many other migrations that took place around California and the West, many possible outcomes could have occurred in the genomic analysis.

Beyond the specific results, what else do you want people to understand about this research and the larger project that encompasses it?

Leventhal: Because the ontogenesis of the request came from the tribe, it is formulated within an ethical framework. It is not anthropologists or biologists who consider Native Americans as objects of study. It is an attempt for the tribe to appropriate its history, its heritage and its biology. For example, the tribe can rely on this work to recover their ancestral remains from other sites, which is of great importance to them.

Hopefully, this will serve as a model that other tribal communities, in the appropriate circumstances, can feel comfortable in establishing these collaborations with various scholars they trust.

Rosenberg: From a genomics perspective, we hope to integrate the scientific approach and the collaborative approach into other projects involving other tribal collaborators. This is the work with Ripan Malhi, who specializes in this intersection of developing collaborations between genomics researchers and Indigenous groups.

Severson: When you’re a student doing the work, it’s not common to have that kind of direct connection with the people who are “the data” you’re working with. We need to have that dialogue, where we could discuss what we’re doing and what we found, and how that makes sense with their story. I felt very lucky to work on this project. It was like what we should be doing.

Other co-authors of this work are affiliated with the Far Western Anthropological Research Group, Northwestern University, University of Illinois at Urbana-Champaign, Florida Atlantic University, the area’s Muwekma Ohlone Tribe San Francisco Bay Area and San Jose State University. Rosenberg is also a fellow of Stanford Bio-X and the Institute for Computational and Mathematical Engineering (ICME).

This research was funded by the National Science Foundation.

To read all of Stanford’s science stories, subscribe to the bi-weekly Stanford Scientific Digest.