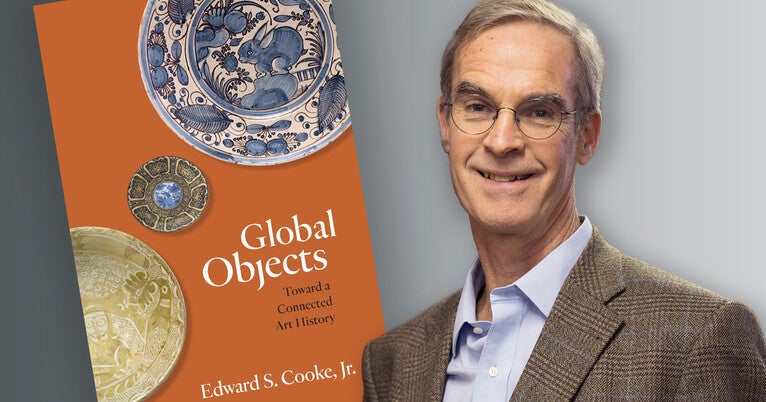 Global objects: a “messy” view of functional creations and their creators

“Objects are messy,” says Yale art historian Edward S. Cooke Jr. Specifically, unlike objects typically called “fine art,” stories of functional objects, such as furniture, textiles and ceramics, are often neither chronological nor limited by a specific object. geographic or cultural. Yet, to get a fuller understanding of art history, he argues, we would do well to consider the histories of these pieces.

In his new book, “Global Objects: Toward a Connected Art History” (Princeton University Press), Cooke breaks down traditional hierarchies in the field of art history by bridging the gap between the “fine arts” – paintings, architecture and sculpture – and material culture through an examination of these most functional objects from around the world.

In doing so, Cooke, Charles F. Montgomery Professor of American Decorative Arts at Yale School of Arts and Sciences, presents a more inclusive and expansive perspective on artifacts and their uses, meaning, and cultural value through time. It challenges the idea that certain artistic genres and materials are superior to others, and shows how objects made from materials such as wood, metal, cloth and clay by artisans for use everyday also deserve their own life stories in a more human story. of art. It shows how these objects often transcend geographical boundaries, moving across the world and taking on new meanings in different spaces.

Cooke recently spoke with Yale News about ‘Global Objects’, which he wrote during the days of isolation at the height of the COVID-19 pandemic, and why the project offers a ‘radical’ approach to looking at artifacts . The interview is condensed and edited.

You have dedicated “Global Objects” to your students. How did they inspire the book?

Edward S. Cooke Jr.: The book grew out of my survey course on world decorative arts. My students inspired him by the kinds of questions they asked, at a time when I was increasing my own understanding of the production and flow of objects across a vast geography. I have also been fortunate to have fellows who have expertise in many different fields.

Having students and fellow teachers enthusiastic about what I was doing, and then sharing their own insights, really helped flesh out the ideas in the book. As someone trained as an Americanist, I think of material culture more from within rather than just outside of a finished object. Exploring functional objects from around the world in the book, I wasn’t as attached to identifying styles or national origins or anything like that. It’s very liberating in some ways, but at the same time intimidating.

When people ask me about my survey course, they always say, “Where do I start? To me, that’s a fundamental misunderstanding because there really isn’t a simple chronological narrative when it comes to artifacts. It’s really a story of movement. It’s about ideas, objects and people that cross paths all over the world. And that’s where having students who come from all over and have diverse specialties really inspires me and reaffirms what I do. They are enthusiastic about my approach and its impact on their own scholarship.

You describe your book as a “radical” new approach to art history. What has been the traditional approach and why is your approach different?

To cook : The traditional approach has often privileged certain genres. There is a hierarchy of expression, so painting, sculpture and architecture generally take first place.

There used to be a slide library here at Yale, and the slides in my corner (American decorative arts) were labeled “minor arts.” Or, if you were to talk about the materials of objects, more value is placed on silver than on copper or copper alloys, iron, brass and things like that.

“Global Objects” rejects such hierarchies. If you want to talk

when it comes to art on the world stage, you can’t just rely on painting on canvas, sculpture, and architecture, things that are often fixed in place.

Overall, the type of objects I deal with in the book are elusive. People don’t know who made them. They are moving. They are often altered and modified over time. They could be reused, reused for something other than what they were at the start.

So I reject hierarchies and this idea of ​​a kind of purity of art objects. I’m also pushing back the timeline we always want to have – an evolving story about the rise, rise and fall of certain objects, genres, etc.

You also say that objects should be viewed “on their own terms”. What do you mean?

To cook : I’m talking about understanding an object from within rather than projecting onto it a series of formal aesthetic questions. For me, there is a whole way of talking about an object on its own terms. Take the material it is made from and its manufacturer, for example. Is it made from imported materials or local materials? Is someone in that local community making it or someone outside? Is it made for one purpose?

And then as soon as an object leaves the shop in someone’s hands, it changes use. Maybe it was originally meant to be used on a table, then it was sent off and placed on a wall. Or the way in which, say, a copper alloy object made in Cairo becomes a talisman, an object of reverence, then in West Africa becomes part of the grave goods, then resurfaces later elsewhere as part of the national heritage . So objects continue to serve different purposes in different contexts, and that’s the mess.

We like to think of such objects in their purest state, whereas thinking of purity is a colonial projection. In reality, objects have their own life. As they move around, different people handle them. Different people bring different kinds of expectations to them.

Does a new approach to art history also mean rethinking the way we publicly display objects in art museums?

To cook : You know, there’s a tension between how I tend to think about objects and how they might be displayed, because display is so important in so many places. How do you display things that emphasize clutter?

I have this perverted dream, which is to have a whole wall of badly hammered copper and wonky ceramic pots – things that haven’t quite worked out but are part of this kind of large-scale amateur work That has been done. This might actually be the most important part of the arts and crafts movement. It’s not aesthetically cohesive and pleasing. It’s wonky, but it’s what defines the arts and crafts movement to me. It’s about this completely decentralized empowerment of middle-class people learning something about materials and processes to thrive amid the drudgery of white-collar jobs. So maybe we can talk about – for lack of a better term – scraps, the things that remain on the publishing floor of the arts and crafts movement.

As you note in your book, artifacts from indigenous peoples are often displayed in a natural history museum rather than in art museums. If you had the power to design museums the way you wanted, would you change that?

To cook : Yes. Indigenous objects are fascinating because some of these objects are considered non-human beings. So you don’t want to put a plexiglass display case on it.

There are African objects that are deliberately meant to be worn out and almost thrown away; they are supposed to have a limited lifespan. Part of their power lies in their fragility.

But it is the antithesis of what a museum is, that is, conservation, preservation and presentation. So I think in trying to figure out what things should be on display, what kinds of things should be used or manipulated, you’re going to have to have different kinds of museums. Perhaps in some cases you exhibit reproduction objects. But then people are embarrassed by that, so it’s complicated.

Are your students also interested in studying art history in a more global context?

To cook : Absolutely. If I teach a purely American course, there is not as much interest. I don’t know if it’s because students distrust American exceptionalism or if they’re more worldly than previous generations of students.

I grew up as an academic in response to my students’ worldview. And I think that’s what makes teaching art history interesting. It’s never the same. It’s always evolving, always changing. That doesn’t mean I lose sight of where I come from or how I approach it. My Global Inquiry course is an introduction to art history designed to foster rigorous and systematic visual and material analysis, but is also intended for non-major history students, STEM students, and other disciplines as well.

What do you hope your students take away from a broader view of art history?

To cook : There are two things I hope they take away. One is curiosity about their built environment and the other is tolerance, not to automatically assume that one culture is superior to another. One way to understand a culture is to look at its way

to make and use things. I encourage my students who travel to find makers. I say, “Can you find people who make things and hang out with them?” Because they are amazed when I bring objects, videos and images from different manufacturers that I have visited in India, Japan, China, etc. They are just amazed. And that makes everything they learn tangible to them.