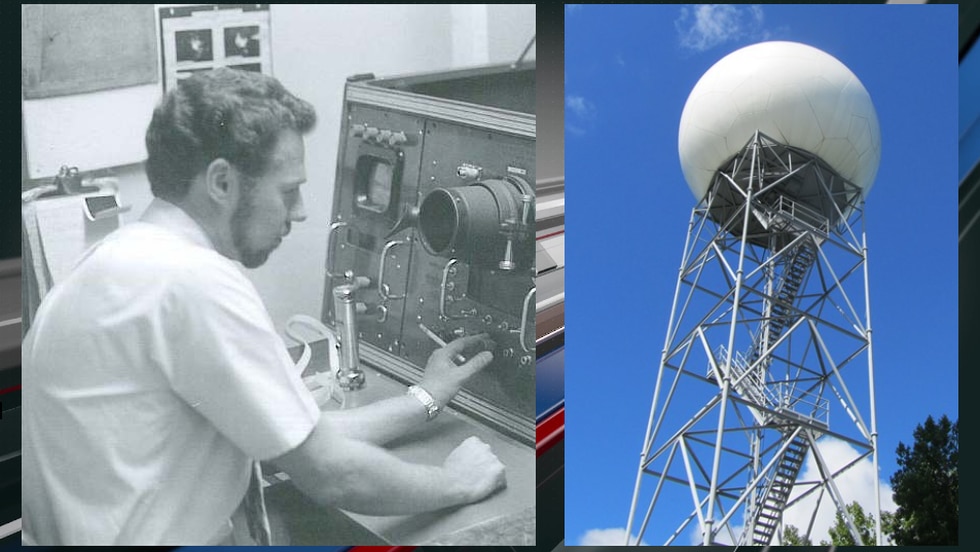 history of weather radar, from WWII technology to current applications

BISMARCK, ND (KFYR) – In our deep dive radar series over the past six weeks, we’ve taken you inside the Bismarck National Weather Service Radar to explain the basics of how it works, how it tilts at different angles to create a three-dimensional image of the atmosphere, explained how maintenance is done, explained the Doppler and dual-polarization technologies that radars use to see inside storms, and finally talked about some limits of our current radar network.

But how did we get to this stage of radar technology and what does the future hold? Here is a brief history of weather radars.

The underlying principle of all radars was first observed in 1886 by Heinrich Hertz when he discovered that electromagnetic waves could be reflected from various objects, and even focused into beams by suitable reflectors.

Various research projects continued on the potential applications of radar and in 1930, Lawrence Hyland of the Naval Research Laboratory discovered that an aircraft flying over its radio antenna caused changes in the signals it received.

During World War II, radar was used by militaries around the world to search for incoming aircraft. But the use of radar for weather observations happened by accident, as military radar operators noticed precipitation showing up on their screens along with their predicted aerial targets.

After the war, the National Weather Service received 25 radars that had been used by the Navy, and in 1959 the Weather Service began deploying its first array of radars, called the Weather Surveillance Radar, or WSR-57, as ‘It was conceived. in 1957 using WWII technology. It gave only coarse reflectivity data and no velocity data, which made tornado detection extremely difficult. Rainfall was plotted on the radar screen using grease pencils, and forecasters had to manually turn a crank to adjust the elevation of the radar sweep.

An updated version, the WSR-74, supplemented and replaced older radars from 1977 with newer and more reliable components. 128 of the WSR-57 and WSR-74 radar models were distributed throughout the country, including North Dakota, and operated as the weather service’s radar network well into the 1990s.

Meanwhile, in the 1980s, researchers began developing the Next Generation Radar System, or NEXRAD, which would incorporate the use of Doppler technology. This was a big step forward for meteorologists, allowing them to detect the speed and direction of precipitation in storms.

These WSR-88D radars, with the D for Doppler, were deployed operationally beginning in 1992. Data resolution was much higher with these radars and severe weather phenomena were easier to spot. The Bismarck WSR-88D radar was installed in 1994 and radar technology has continued to improve since then with several nationwide network upgrades, particularly with the introduction of dual polarization technology which occurred in over the past 10 years.

Chauncy Schultz, chief science and operations officer at the Bismarck National Weather Service, said: “This is one of the most significant technological changes in the field of meteorology in our lifetime. Prior to the mid-1990s when these new speed cameras were installed, the turnaround time, the notice period that you received for a warning was only a few minutes on average. Now it’s 10 minutes, 20 minutes, leaps and bounds thanks to the installation of speed cameras, all the new technology and other research that we’ve learned since, of course. But the installation of radar was the turning point in improving warnings in the United States.

155 NEXRAD radars are now positioned throughout the county, most of them either co-located with National Weather Service offices or near Air Force bases, as is the case with the radar northeast of Minot. Even though the NEXRAD radars have now exceeded their original life estimate of 20 years, the radars are currently undergoing a life extension program to keep them operational into the 2030s.

But in the meantime, private companies such as Climavision have stepped in to try to fill some of the gaps in the National Weather Service’s existing radar network with their own proprietary radars. And future radar technology, such as faster-scanning phased array radars that can be electronically steered, giving users the ability to control how, when and where radar scans are researched and developed.

To wrap up this series, I hope you now have a better appreciation for weather radar technology that many of us take for granted and think about how radar works the next time you load radar onto our app or that you see us using radar on the air.