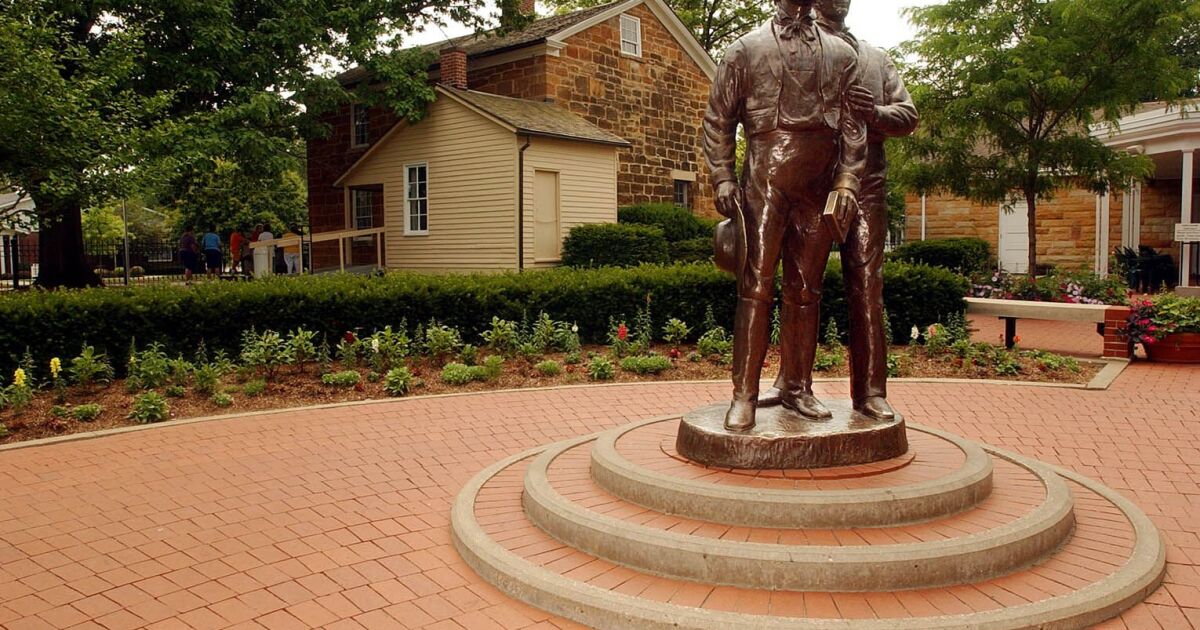 Miner Deming probably wouldn’t be as well known today if he weren’t a brigadier general in the Illinois militia when Joseph and Hyrum Smith were killed in 1844.

The story is traditionally told that after the Smith brothers surrendered, Deming escorted them through unruly troops of militia onto the grounds of the courthouse in Carthage and allegedly introduced them as Generals Joseph and Hyrum Smith of the Legion of Nauvoo.

Local militia troops, also known as the Carthage Greys, believed Deming gave prisoners too much respect and indulged in hissing and swearing, said Bryon Andreasen, a historian and curator at the University’s History Library. the Church.

“Afterwards, Deming allegedly ordered the Grays arrested. At this, the Grays nearly mutinied, until a face-saving way was found for Deming to rescind the arrest order,” Andreasen said.

Deming, a non-Latter-day Saint later elected sheriff, was a principled man who tried to bring those responsible for the murders of Joseph and Hyrum Smith to justice in the face of ridicule and persecution, Andreasen explained during the Church History Museum exhibit. Evenings at the Museum series on Thursday, October 20.

“Although it would have been much easier and safer for him to just stand up and let things happen, he didn’t,” Andreasen said. “He tried to preserve the rule of law and he tried to ensure that even Mormons were treated by law. He stood up and said ‘these people need to be prosecuted and held accountable, even though it’s politically unpopular for me to say that’. … It’s this human story that I find fascinating.

Andreasen learned about Minor and Abigail Deming’s story as a graduate student at the University of Illinois. Their experience—documented in letters they wrote from Illinois to family members living in Connecticut—offers historians a nonmember perspective on life and events in the state before and after the martyrdom of Joseph and Hyrum Smith.

Andreasen was so captivated by their story that he one day decided to research and write a biography, a project he is currently undertaking. He hasn’t found any photos of Minor or Abigail yet.

Born in 1810 in western Connecticut, Deming was 23 when he ventured west and bought land in western Illinois before returning to marry his sweetheart, Abigail Barnum, a cousin of the famous showman, businessman and politician Phineas Taylor Barnum.

The couple moved to Hancock County, Illinois in 1838, where Minor farmed, taught school, and engaged in civic life.

As members of The Church of Jesus Christ of Latter-day Saints settled in the area in the early 1840s, the Demings observed that many were “poor” but found them to be “good citizens” , according to Andreasen.

The couple also described Nauvoo as the best market for produce and hired a Latter-day Saint family to oversee some of their farmland, despite opposition from some neighbors, Andreasen said.

“The Demings may have felt a kind of New England cultural affinity with many Latter-day Saints,” he said. “While it is clear that neither Minor nor Abigail had any sympathy for Latter-day Saint theology or their religious practices, they nevertheless did not avoid association with individual members of the Church in the context of everyday life.”

Andreasen continued, “For them, the saints had a human face. Thus, when uncomfortable stories and reports regarding the Saints finally began to dominate public debate, the Demings’ knowledge of individual Church members apparently predisposed them to a more tolerant view of the Mormon community.

As a result, the Demings were labeled by anti-Mormon extremists as “Jack Mormons”, a derogatory term which meant “Mormon sympathizers”.

Due to complications, Deming was away from Carthage when the murders of Joseph and Hyrum Smith took place. Not only was his personal honor at stake, but he feared that he and Illinois Governor Thomas Ford were implicated. He felt the only way to clear his name was to seek justice for those responsible. He ran for Hancock County Sheriff and was elected.

His first job was to prepare for grand jury hearings, which meant he had to serve subpoenas and subpoenas on many people who didn’t want to show up in court.

When the grand jury indicted nine men for the Smith brothers’ murders, it had to serve warrants for the arrests of people who had gone into hiding.

He was also trying to protect the Saints and other members of the community from anti-Mormon extremists.

“It all became a fiasco,” Andreasen said.

Deming encountered enormous opposition in his quest for justice. When he attempted to serve arrest warrants in Warsaw, 27 km west of Carthage, large numbers of men took to the streets to threaten and intimidate Deming and his deputies.

The sheriff also made a dangerous 100-mile winter trip to Springfield to arrest defendant Jacob Davis, a state senator, during a session of state legislation. Davis claimed immunity while the Senate was in session, and Deming was reprimanded, criticized, and forced to release Davis.

Deming arrested others but there was an escape.

In a letter, Deming lamented his inability to overcome the crowd.

“They beat, threaten, assault and harm whoever they want with impunity,” Deming wrote.

The sheriff was no exception. A former mob member beat Deming and tried to gouge out his eyes. Men broke into his stable and shaved his horse’s mane and tail. He became the subject of jokes and mockery in Carthage and Warsaw. He moved his family to live with him in Carthage prison for their safety.

A dubious legal maneuver allowed the defense to have a substitute jury that acquitted all defendants in the trial of the accused killers of Joseph Smith.

The day before the trial of Hyrum Smith’s killers, one of the anti-Mormon leaders argued with Deming over a property sales tax issue and attempted to strangle the sheriff. Deming drew his gun and shot the man in self-defense. He resigned as sheriff and hired a lawyer for his own trial. He and his wife struggled to sleep for weeks, fearing a nighttime assassination attempt.

But before that happened, the 35-year-old caught a congestive fever and died just yards from where Joseph Smith was murdered the year before.

“In a way, another victim of the Carthage mob,” Andreasen said.

Abigail Deming never remarried. She died in New York in 1890 at the age of 80.

Donning curator gloves, he reached under the podium and pulled out the gun – a dragon-sized .36 caliber Allen & Thurber Pepperbox rotary pistol. He told the audience that for over 30 years, Minor Deming’s gun has been masquerading as the gun Joseph Smith used in the Carthage Jail attack at the Museum of History. Church because he had been misidentified. The correct pistol, a smaller one of similar brand, is now on display.

“The Deming pistol has its own dramatic history and is yet another tangible link to Church history in Illinois in the 1840s,” Andreasen said.

Andreasen presented some takeaways from the lives of Minor and Abigail Deming.

“We are reminded that the history of Nauvoo did not end with the martyrdom of Carthage, that there were still nearly two years of escalating violence, after which the Saints were forced to leave under the threat of a weapon,” he said. “The Demings’ experience reveals how ruthless many of the top anti-Mormon leaders were, that their wickedness was real and not just an exaggeration born out of paranoia or Latter-day Saint persecution.”

Andreasen said much of the historical writing about the Nauvoo era assumes an almost exclusive focus on members versus nonmembers, a Mormon versus non-Mormon dichotomy. But as the Demings’ experience shows, there were complex, nuanced and deeply conflicting differences of opinion among the former settlers before the Saints arrived in Hancock County in 1839.

Andreasen believes the number of county residents who joined and supported extremist exterminators is actually lower than many historical records indicate.

In the Church History Museum’s ‘Heavens Are Open’ exhibit, visitors walking through the Nauvoo section will see the sword of Thomas Brockman, the renegade militia leader who attacked the city of Nauvoo in September 1846. On the wall above the sword is a quote from Minor Deming: “Exterminators are more fanatical than Mormons and less law-abiding.”

These were the first Evenings at the Museum organized under the direction of the museum’s new director, Riley M. Lorimer. Hugo E. Martinez, General Authority Seventy and associate executive director of the Church History Department, and his wife, Sister Nuria Martinez, also attended the event.