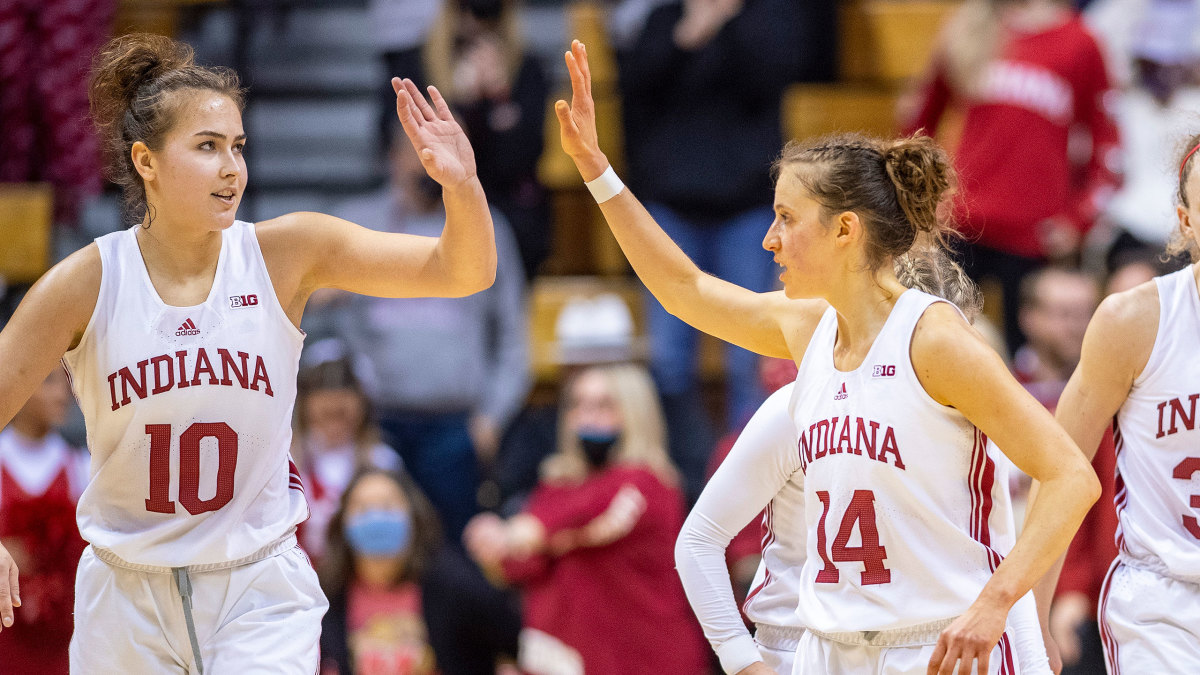 Indiana women’s basketball has a lot more to prove

Indiana women’s basketball made its deepest run ever at last season’s NCAA Tournament, reaching the Elite Eight before falling to Arizona. But despite this program breakthrough, the team was far from satisfied.

“It hurt,” said guard Ali Patberg. “We lost, and none of us are good losers.”

Patberg, a sixth-year senior at the time, faced the decision of whether to use her senior year of eligibility or leave college hoops more than half a decade after her debut.

But Patberg justified his decision quite easily.

Knowing that his other four starters would return for the 2021-22 season – and that his team had proven to themselves and the nation that they could hang on and beat the best (like No. 1 NC State, that IU upset in the Sweet 16)—Patberg followed suit with hopes of accomplishing what she set out to do seven years ago: win a championship.

The Hoosiers managed to build on last season’s success when they started 14-2 this year. Their only losses came to top-10 opponents NC State and defending national champion Stanford by just eight and three points, respectively. They have three wins over ranked opponents and are off to a 6-0 start in Big Ten play, including their first win in program history against Maryland, the six-of-seven-year conference champion. The victory propelled Indiana to the top of the Big Ten and No. 6 in the nation.

“If you’re in the Big Ten, your barometer is Maryland,” head coach Teri Moren said. “They’ve always been the team that everyone chased…Maryland’s win was important for our program.”

But while the Hoosiers have controlled their destiny throughout the season, they are now in uncharted territory, especially in the Moren era.

When Moren took over as head coach in 2014, Indiana was a Big Ten bottomfeeder, finishing eighth or worse in the conference for five straight years. Its first season wasn’t much different, as IU finished 12th, but in its second year, in 2015-16, the team skyrocketed to fourth in the Big Ten and finished just two lower. times since. In 2016, Moren won Big Ten Coach of the Year honors after completing the program for her first NCAA tournament since 2002. The Hoosiers have held more tournaments (three) under her than any other head coach.

“Our program is what it is because of her,” says Patberg. “Who she is as a person and who she is as a leader is all we all embody on the pitch. … She’s one of a kind, she’s special, and we were lucky to have her as our leader.

Although Moren helped make the program the powerhouse it has become, hitting several milestones along the way, she still pursues the primary goal she set for her team eight years ago: to win the Big Ten. The last time the Hoosiers claimed a share of the title was in 2002, when they won the Big Ten tournament despite finishing fifth in the regular season standings. Their last regular season title was in 1983, when Moren was just 13 years old.

Almost 40 years later, the team thinks this could be their year, and Moren will do whatever it takes to make it happen.

“He’s the most competitive person I’ve ever met,” says senior guard Grace Berger. “Whether it’s in a drill in training, anything outside of training or obviously a game, she wants to do everything she can to win.”

Eight years of work, this Hoosiers team assembled by Moren can help him achieve this goal.

The starting lineup of Mackenzie Holmes, Nicole Cardaño-Hillary, Aleksa Gulbe, Berger and Patberg is arguably the best in the Big Ten and one of the strongest in the country. All five are averaging double-digit runs, and Holmes, Patberg and Berger all rank among the conference’s top 25 scorers. Holmes, a junior, is the youngest on the roster, so the veterans’ experience has kept IU calm against top opponents inside and outside the conference. While his offensive production has been critical to his success, especially in transition, his defense is key, leading the conference to hold opponents to just 57.8 points per game.

While the team has the right pieces and certainly no shortage of talent, its culture and mindset is what propelled Indiana to such success.

“We have players who are selfless, who understand their role and have completely bought into Coach Moren’s vision,” Berger said. “We don’t worry about individual awards. We’re just worried about winning a championship.

“Championships are something we’ve always talked about in our program,” adds Moren. “We have never been shy about talking about it because I strongly believe in talking about it. You have to broadcast it for your players. They need to know why they play.

No championship team reaches the end without facing some sort of adversity, and IU has had its fair share, especially in recent weeks. Before the game against Nebraska, Indiana leading scorer Holmes was ruled out with a knee injury, and it was later revealed that she needed surgery and was might not return until the playoffs. It was the first time the starting five of Cardaño-Hilary, Patberg, Berger, Gulbe and Holmes hadn’t started together since last January. Then IU was forced to play without Cardaño-Hillary for the Purdue game due to COVID-19 protocols.

Moren likes to keep her rotation compact, playing no more than seven players a night on average, but injuries and COVID-19 issues have forced her to look deeper on the bench of sophomores Kiandra Browne and Chloe Moore -McNeil, allowing the team to build its depth before the playoffs.

“Do I like the idea right now of playing without MacKenzie? Absolutely not,” Moren says. “I don’t like it, but I think it will benefit us later with experience.”

The Hoosiers have been off the field for more than two weeks now, as their last three games were postponed due to COVID-19 issues in their schedule and those of their opponents, but they are ready for the demanding schedule ahead of them. Facing No. 7 Michigan on Monday before facing No. 23 Iowa and No. 17 Maryland to end the season, IU hopes they can keep the momentum going.

“We feel like we’re playing basketball pretty well, and anytime there’s a stoppage or a break or a disruption, I think our biggest fear as staff is that we’ll probably look like a bit out of sync,” says Moren. “We had a few practices where we really tried to get up and down the floor against each other and against our scout team. It’s still different. I have to rely on the fact that these girls are vets and have experience, and that will pay dividends for us.

Indiana understands the issues at hand, especially given the history of the program and how far it has come over the past 20 years.

“We always play with a chip on our shoulder,” says Moren. “As far as relevance many years ago, you weren’t talking about Indiana women’s basketball, so I think we’re still walking every day with that chip that we have more to prove.”

For Moren and Patberg, who grew up just 52 and 37 miles from Bloomington, respectively, reaching that milestone in their home state — especially one that values ​​basketball as much as Indiana — would mean even more.

“In 2018 when we won the NIT, having 13,000 people in the Simon Skjodt meeting room was something that, having grown up in southern Indiana and coming to watch Indiana women’s basketball, I never thought this could happen,” says Moren. “I think we’ve sparked some interest in women’s basketball, especially here in Bloomington.”

While the Hoosiers’ potential is clear, Patberg says they’re not taking the lead. For now, they are taking one game at a time.

“I came back for a reason, so that would be kinda nice [to win a title]”That’s for sure,” she said. “But we still have a lot of work to do and we are ready for it.”