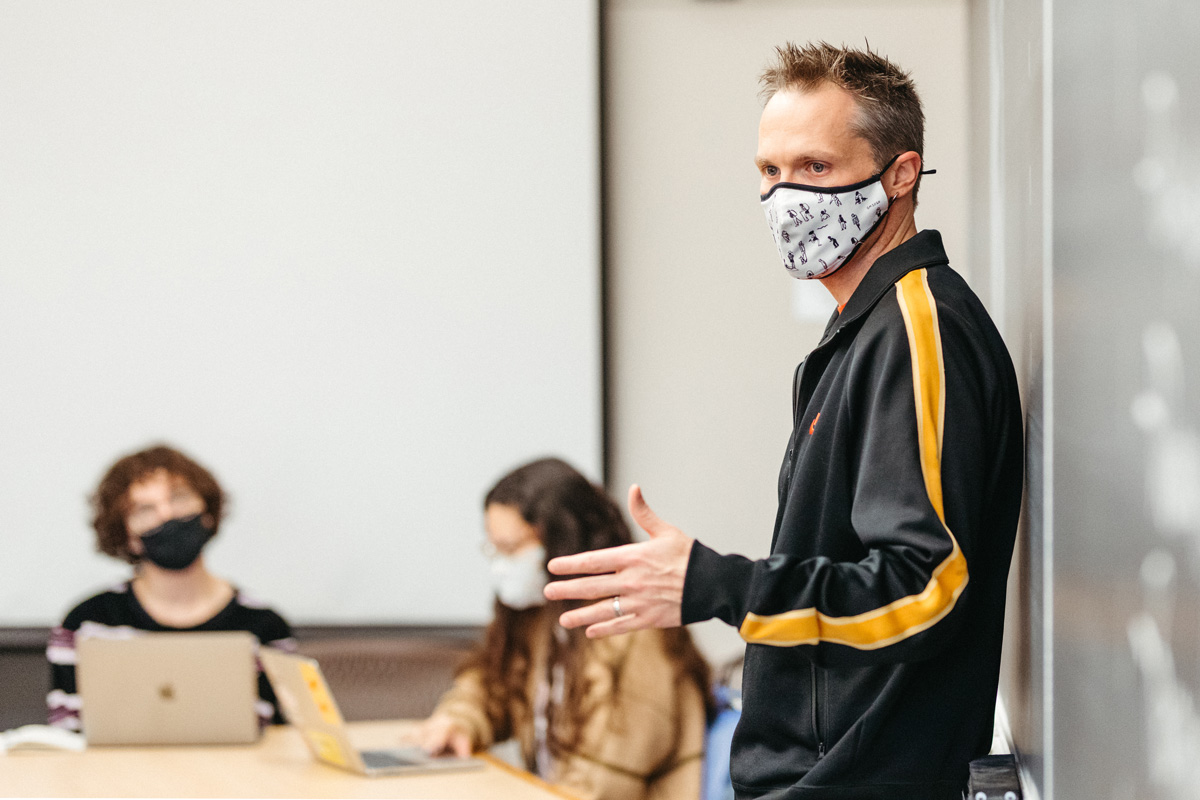 For over 100 years, Reed’s professors have distinguished themselves by treating students as intellectual peers – “Comrades of the Quest,” to borrow the president. William T. Fostermemorable phrase. Here we celebrate six professors who were recently appointed to prestigious chairs, a mark of esteem from their colleagues and recognition of their talent for inspiring students.

Professor Rork studies public finance. His current research interests lie in the areas of state taxation, interjurisdictional competition and the economic determinants of interstate migration, in particular with regard to the elderly. He has published his research in journals such as the Urban economics journal, Regional sciences and urban economics, National tax journal, Regional Journal Science, and Public finance review. He teaches courses in microeconomic theory, game theory and urban economics. He received his doctorate from Stanford and has taught at Reed since 2010.

The Hay Chair honors Prof. George hay, who joined Reed Faculty in 1956 and has worked extensively in international economics, traveling to Indonesia, South America and Africa. A powerhouse for the college, Hay served as director of admissions from 1958 to 1964, vice president and treasurer from 1973 to 1979, executive vice president from 1979 to 1980, and acting president from 1980 to 1981. The chair was established in 1989 under the leadership of long-time administrator Richard P. Wollenberg. In the end, donors contributed more than 100 donations to endow a faculty position in memory of Hay.

Professor Renn is a neuroscientist who studies the evolution of social behavior. She is an expert on African cichlids, a type of fish that has experienced incredibly rapid evolutionary radiation, resulting in thousands of closely related species that exhibit a wealth of morphological and behavioral diversity despite very low genomic sequence divergence. She has been teaching at Reed since 2006.

The Perlmutter Chair was established this year by the Merck Foundation to honor a longtime director Roger Perlmutter ’73 on his retirement as Executive Vice President of Merck Research Laboratories. The chair will help anchor the teaching of biology at Reed while contributing to the legacy of one of the college’s most important leaders.

Professor Mieszkowski is a specialist in 18th and 19th century European literature and philosophy. He gives courses in German and comparative literature and literary theory, ancient and modern humanities and continental philosophy. He is the author of three books: Imagination works (2006), Watch the war (2012), and Pain crises (2019). He holds a PhD in German Literature from Johns Hopkins University and has taught at Reed since 1997.

The Aragon chair was created by James C. March ’77 and Melissa March in honor of Rex Arragon, a beloved history teacher [1923–74]. After dating Reed, Jim studied Information Economics at Stanford University. He then founded WJM Technologies, a software company that developed tools to detect bank fraud.

Professor GhaneaBassiri specializes in Islamic studies and American religious history. He was named Carnegie Scholar for his book A History of Islam in America and a Guggenheim Fellow for his work on the mosque in Islamic history. He teaches courses in the humanities, Islam, theory and method in the study of religion and religious diversity. He joined Reed in 2002 after earning a doctorate in religion from Harvard University.

The Thomas Lamb Eliot Memorial Fund for Religion was established in 1953 by his son, William Greenleaf Eliot Jr. Thomas Lamb Eliot was Chairman of the founding board and was a director from 1911 to 1925. Following in his father’s footsteps, Eliot, Jr. served as a trustee from 1925 to 1941. The foundation supports the religious interests and education of students, faculty, and the community of Reed.

Professor Cohen is trained as a media theorist and art historian. His research interests include modern and contemporary art, computer and network media, critical theory, affect theory, queer theory, and black studies. He is the author of Never alone, except now: Art, Networks, Populations (2017). He teaches courses in the history of modern art, video art, the politics of representation, art and technology, and the arts of capitalism. He received his doctorate in art history from the University of Chicago and has taught at Reed since 2011.

The Goodsell chair, designed by Sue and Edward Cooley and John and Betty Gray, pays homage to the author and columnist Jane Neuberger Goodsell ’42. Goodsell majored in English literature at Reed and began her writing career when she was raising three daughters. In addition to his column From Soup to Nonsense, which was published in the national union press, Goodsell published his first children’s book, Katie’s magic glasses, in 1965. His last books include Toby’s toe, Not a good word about anyone, and the children’s biographies of Eleanor Roosevelt, the Mayo Brothers, and Hawaii Senator Daniel Inouye.

Professor Koski is an expert on the political dimensions of policymaking, such as environmental policy, energy policy, public budgeting and climate change. He currently teaches courses in US politics, public policy, state and local politics and politics, and environmental policy and politics. He can be found talking politics and politics everywhere, but especially where there is pinball, barbecue, good fishing, or wild stuff. He received his doctorate from the University of Washington and came to Reed in 2011.

The Greenberg Chair was created this year in memory of Daniel B. Greenberg ’62, who served on Reed’s board of directors for over 45 years and oversaw growth and transformation in all areas of the college. His philanthropic leadership along with his wife, Susan Steinhauser, has been instrumental in several critical initiatives, including environmental studies. The Chair of Environmental Studies will support generations of talented teacher-researchers in this important area of ​​endeavor and contribute to Dan’s remarkable legacy at Reed.