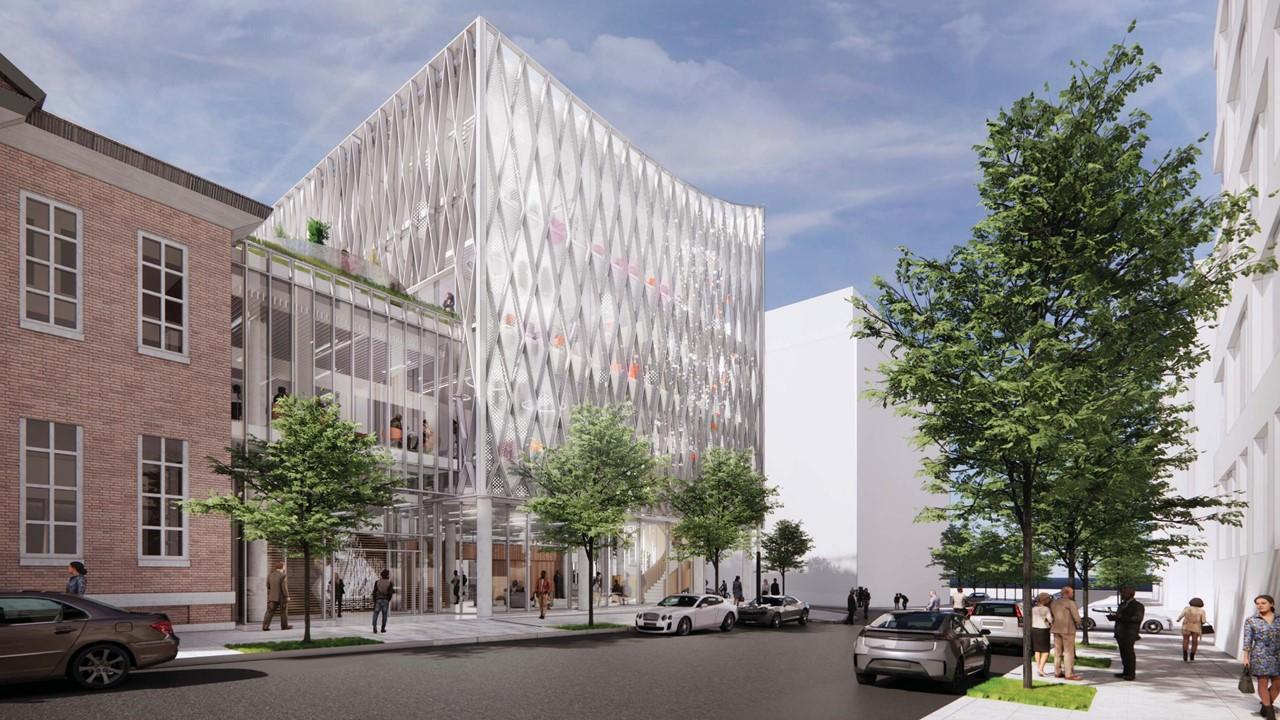 The plans were presented at a meeting of the Urban Design and Architecture Advisory Group for Baltimore City Planning on Thursday.

This marks an important step in the construction project, the design work of which will continue until the end of the year.

“The architectural design of the building that will bear the name of Henrietta Lacks reflects Johns Hopkins’ commitment to proudly honoring and celebrating Ms. Lacks’ extraordinary legacy on our campus,” said Johns Hopkins University President, Ron Daniels. “We are thrilled to share these plans with the city’s Design and Architectural Advisory Committee, and we look forward to continuing to work closely with the Baltimore community and Henrietta Lacks’ family as this important project is progressing.”

The approximately 34,000 square foot new building in East Baltimore will adjoin Deering Hall, a historic structure that houses the Berman Institute of Bioethics. Located at the corner of Ashland and Rutland Avenues in the heart of Baltimore’s Eager Park community, the building will support the multidisciplinary and complementary programs of the Berman Institute and Johns Hopkins University School of Medicine, as well as other academic divisions. It will include a flexible curriculum and classroom space to support education and research, and meeting space will also be made available to the community.

“It’s exciting to know what the building named after my grandmother, Henrietta Lacks, will look like from the captivating exterior of its heritage. I’m excited to see it introduced to the Baltimore community,” said Jeri Lacks Whye, granddaughter of Henrietta Lacks and member of the Henrietta Lacks Building Advisory Board. “The design reflects not only her strong and beautiful spirit, but also the important role she plays in the history and future of East Baltimore.”

“The design reflects not only her strong and beautiful spirit, but also the important role she plays in the history and future of East Baltimore.”

Jeffrey Kahn, Director of the Berman Institute, added, “This important building will dramatically expand our capacity for teaching, scholarship, and community development, inspiring efforts to address inequities in biomedical research and health care. which are a further tribute to its remarkable namesake”.

Construction is expected to begin next year. Johns Hopkins also announced that the building will be completed in 2025, with an opening celebration expected. Updates on the building’s progress will be available online.

“The expression of this building is unique to its surroundings, as Henrietta Lacks was an African-American human being unique in this world. Our team worked to design a building that fits into the urban context but has a particular identity that we hope people believe warrants bearing the name of Henrietta Lacks,” Vines and Thomas said in a statement. “As we continue to progress on the design, we believe this building will remain a vital way to share the story of Henrietta Lacks for generations to come.”

Lacks was a 31-year-old African-American mother of five from Baltimore County who sought treatment at Johns Hopkins Hospital in the early 1950s. Doctors diagnosed her with cervical cancer and, as medical records show she received care that included the best medical treatments available at the time for this terrible disease. Unfortunately, the treatment failed and Lacks died in October 1951.

A sample of Lacks’ cancer cells was recovered during a biopsy and sent to cancer researcher George Gey’s nearby tissue lab, where he had collected cells from patients who came to Johns Hopkins Hospital with cervical cancer of the uterus. He discovered that these cells were unlike any other he had seen: where other cells died, Lacks cells survived and the number of cells doubled every 20 to 24 hours. Soon after, he began sharing the cells, free of charge, with researchers around the world. Considered “HeLa” cells, the cell line that started from Lacks’ biopsy has proven to be remarkably durable and prolific, and although many additional cell lines are in use today, HeLa cells have had a unique contribution to untold medical breakthroughs in the decades since their discovery.

In 2013, Johns Hopkins worked with members of the Lacks family and the National Institutes of Health, NIH, to help craft an agreement that requires scientists to receive permission to use Henrietta Lacks’ genetic blueprint in the NIH-funded research.

The NIH committee responsible for overseeing the use of HeLa cells now includes two members of the Lacks family. The biomedical research community has also made significant strides in updating research practices for the donation and use of tissue from patients, in part thanks to lessons learned from the story of Henrietta Lacks.

To learn more about Henrietta Lacks and the far-reaching impact of HeLa cells on medical research, visit the Henrietta Lacks page on the Johns Hopkins School of Medicine website.