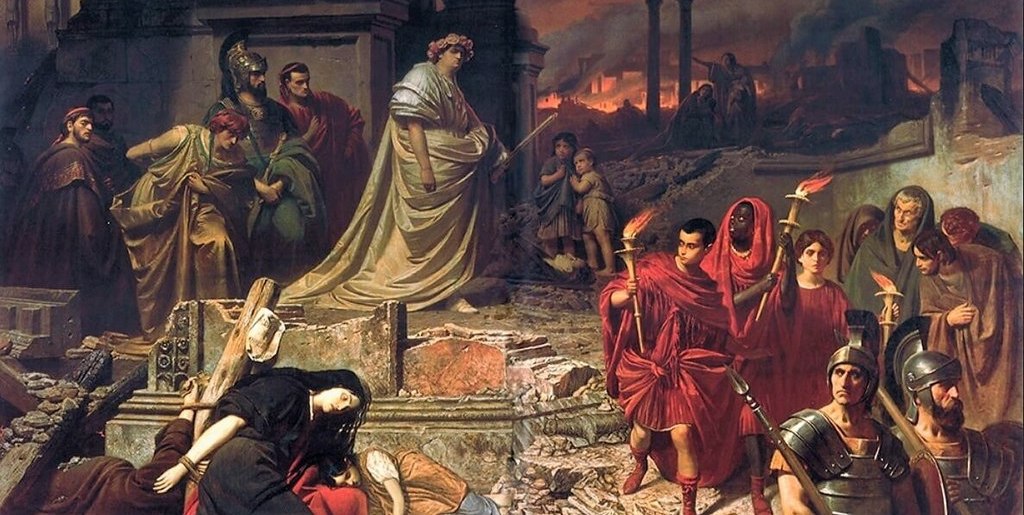 He has been called Rome’s greatest historian, the sharpest analyst of the autocratic regime of its emperors. His surname means “silent”, but Publius Cornelius Tacitus was a terrific and highly articulate speaker and outspoken author of several books. Born around AD 56 somewhere in the northern provinces, he was a boy in the time of Nero and spent his early career in public affairs. His father was probably an equestrian official and chief financial officer in Belgian Gaul, thus close to the top of Roman society, although not an aristocrat. The equestrian order was like a club whose entry was tied to personal wealth. Its members had many special privileges, although these were not as extensive as those of the senatorial class.

Tacitus himself was a praetor at the age of thirty, he was promoted to the Senate, then, after four years of absence from Rome with his new wife, the daughter of a consul, became consul. He was thus one of the two main magistrates of the city, commanding the army and presiding over the Senate. He achieved particular fame in AD 100, when, working alongside his friend Pliny the Younger, he successfully sued a proconsul under Nero for bribery and extortion.

Tacitus could have risen even higher, but he ended his public life as governor of what is now modern Turkey. “In the course of a distinguished career”, writes Tom Holland, he had “demonstrated a cunning, if not very glorious, instinct for survival”. While the emperors did terrible things, he “chose to keep his head bowed, his gaze averted”. But he had to catch up with this conservatism once he got down to writing history.

The year following his consulship, Tacitus published two small books: Farmera biography-oration of his late father-in-law, Governor of Great Britain (the earliest reference to London by name is from Tacitus), and the Germanya treatise of about thirty pages on the Germanic peoples which catered to the tastes of educated Romans, then keenly interested in the independent tribes of Germany and the campaigns of their army against them.

For Tacitus, books were good first subjects on which to hone his writing skills. Agricola himself is never fully brought to life, there is little anecdotal material, and the military campaigns are crudely drawn – Tacitus, who probably never visited Germany, has often been described as a non-military historian. But the incisive judgment that distinguishes his later work is already there; after describing Agricola’s measures to promote the Romanization of Britain, Tacitus comments: “Our style of dress was admired and the toga became fashionable.

Gradually they fell into those attractions of vice, the public drawing-room, the bath, the eloquent banquet. In their ignorance, they called it culture, when it was part of their enslavement. Thinking of his father-in-law, he gives us this epigram: “Even under bad rulers there can be great men. And the words put into the mouth of a British leader about his Roman occupiers are famous: “They rob, kill and pillage everything under the deceptive name of Roman Rule. They make a desert and call it peace.

It suffices to conclude that for almost two thousand years Tacitus has exerted a profound influence.

Tacitus then wrote much more careful works: a treatise on rhetoric, Oratoribus Dialog; The stories, from the fall of Nero in 68 AD and the accession of Tiberius until the “year of the four emperors” (68-69 AD: Galba, Otho, Vitellius and Vespasian), ending with the death of Domitian in AD 96; and, more than a decade later, a story that has been known since the 16th century as the The annalsfrom the death of Augustus to Claudius, breaking off in the middle of his sentence in AD 66. Overall, more than half The annals has been lost, including the middle section which deals with the mad emperor Caligula.

It is not my purpose to set forth all the motions which have been made in the Senate, but only those which were either honorable or particularly disgraceful in their character. For I consider it the chief function of history to save merit from oblivion, and to oppose evil words and evil deeds with the terror of the reprobation of posterity.

He seems indifferent to the long rhetorical flourishes of oral recitation and is more concerned with reaching the private reader. He has few fixed ideas in philosophy or religion and his writing presents inconsistencies, though his persistent penchant for epigrams rivals Herodotus: “Once the murder begins, it is hard to draw the line”; “The desire for glory clings even to the best men longer than any other passion”; “The more laws, the more corrupt the government”; “The services are acceptable, as long as it seems possible to repay them; when they pass this point, hatred takes the place of gratitude. The balanced rhythm of this last aphorism has something of Samuel Johnson.

In his later books, Tacitus wrote about the civil wars of his day, and his descriptions of human suffering combine fascination, disgust, and an almost cinematic sweep. In AD 9, three Roman legions had been lured into the Teutoburg Forest (now Lower Saxony), where they were ambushed by the young German hero Arminius. Five years later, another Roman army, this time under Germanicus, visited the site:

The scene lived up to its horrific associations… A half-ruined parapet and a shallow ditch showed where the pathetic last remnant had gathered. On the open ground were bleaching bones, strewn where the men had fled, piled up where they had stood and fought back. Fragments of spears and horse limbs lay there: also human heads, tied to tree trunks. In nearby groves were the bizarre altars where the Germans had slaughtered the Roman officers.

Despite such passages, Tacitus is not really interested in the Roman Empire as a whole (“my chronicle is quite different from the histories of early Rome”) and concentrates on the private lives of the emperors, on the court and his intrigues, and on the ruling class to which he belonged. At the beginning of The annalshe states that he plans to write “insensitive, for I have no reason to be moved, neither by hatred nor by partiality”.

The truth is different, and in The stories his distaste for Domitian, to whom he confesses to partly owing his own advancement, is evident; one of the emperor’s enthusiasms, he tells us, was to stab flies with a sharp stiletto. The portraits of Tacitus of Tiberius (of which he barely has a good word), Claudius and Nero are close to caricature, so strong are his feelings. After the death of Tiberius, he summarizes:

His character went through as changes in his fortunes. Admirable in conduct and in high esteem, while in private station or fulfilling commands under Augustus; dark and adept at affecting virtue, as long as Germanicus and Drusus lived he exhibited the same mixture of good and evil until his mother’s death. Then came a period of diabolical cruelty, but masked licentiousness, during the days when he loved and feared Sejan: until at last, freed from all fears, lost from all shame, he burst into wickedness and wantonness, and never shows up. character but his own.

Lively stuff, only contradicted by other accounts which attest that Tiberius was conscientious to the end and maintain that the frenzied orgies and reign of terror which Tacitus later describes never took place. But it is the source that is remembered, with its lurid details of Tiberius having his testicles licked by young boys or the children of Rome’s great families “performing multiple copulations before him”. In many of his pen portraits he is a skilled psychologist, and yet he conceived the figure as static and unchangeable, so that the view that Tiberius ended his reign as dictator compels him to to assume that the Emperor was vicious from the start.

At other times, Tacitus can see that moral decay is a process that often takes years; these were the emperors he could not forgive.

At other times he can see that moral decay is a process that often takes years; these were the emperors he could not forgive. They fail to deal with their scheming and murderous wives; their subordinate ministers are flattering and conniving; and the bloodthirsty mob which composes the imperial army disposes of the emperors and the laws with impunity. In AD 68, not a single descendant of Augustus was still alive.

Tacitus had great descriptive powers, especially when writing about war. He was a tireless moralist, though it was easy to take sides in the face of a court characterized by “unprecedented turmoil and terror…cruel orders, incessant accusations, treacherous friendships, envy, laziness, corruption, bloodlust, flattery, stupidity, malevolence and sexual excess. Overall, he exhibits a zeal for truthful presentation and sorting of evidence; yet success did not happen overnight.

Pliny the Younger was perhaps so certain that Tacitus’ stories would last through the centuries that he begged him to be mentioned in them, but historians of the later imperial years barely mention him, and he was little read before. the fourteenth century, partly because of Christian antipathy towards a writer considered pagan. The annals and The stories survived the Middle Ages each in a single manuscript, The annals in an incomplete and very damaged copy.

However, the accolades were about to pour in. Gibbon hailed Tacitus as the model “philosophical historian”. Machiavelli states in The prince this reading The annals and The stories opened his eyes to the amorality of power. Stendhal evokes Tacitus more than fifty times in his novels and reads him on his deathbed. Jefferson loved him more than all the other ancient historians, writing to his granddaughter: “Tacitus, I consider him the first writer in the world without a single exception”. Simon Schama even used “Tacitus99” as part of his email address for a while.

Yet he was and remains controversial, much talked about for his assertion that the German tribes were racially unmixed, “a people in their own right, pure and like no other”. Germany, which so extolled their simple virtues, became a literary source for the revolt of German Protestants against Catholicism in the sixteenth century and, much less sympathetically, for German nationalism in the nineteenth and twentieth. Critics have accused Tacitus of being anti-Semitic, and in modern times his books have been banned in Eastern Europe.

Stanford classics professor Christopher Krebs in A most dangerous bookdescribes how the Nazis would boast Germany like “a bible”, a “golden booklet”, a striking proof of the glorious antiquity of Germany. Heinrich Himmler, exulting in the depiction of ancient Germans as free-spirited warriors, wrote the foreword to a 1943 edition of the book. The Third Reich, however, was infamous for twisting the messages of writers based on their propaganda. It suffices to conclude that for almost two thousand years Tacitus has exerted a profound influence.