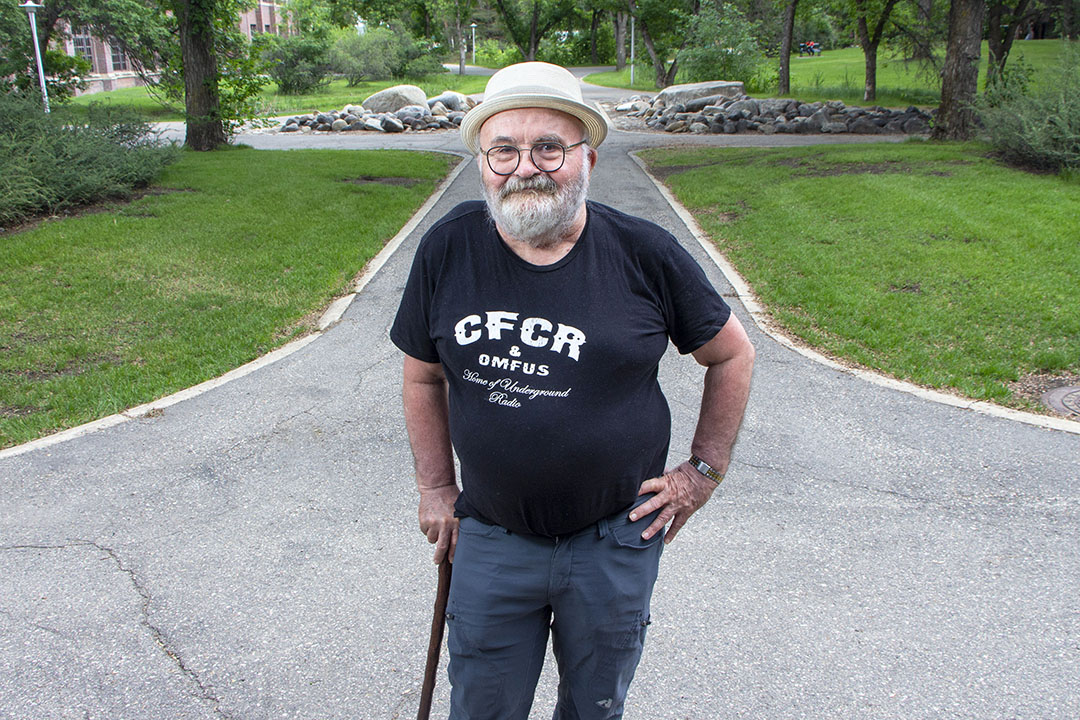 But make no mistake: that doesn’t mean it’s slowing down.

“I’m a late bloomer, you know. I always have been,” said Ervin, a professor in the Department of Archeology and Anthropology at the University of Saskatchewan (USask).

Ervin, who is approaching his 80th birthday, will retire from USask on June 30, 2022. He could have quit decades ago, but found it was some of his best work well past the traditional age of retirement.

This, coupled with an obsession with his chosen field of anthropology, drove him to actively teach and research.

“I love the subject. It really gives me juice,” he said.

Ervin has always been a supporter of anthropology as a practical discipline. If his half-century career could be summed up, it would be this: he studies the impact of politics on people.

Originally from Nova Scotia, Ervin studied at the University of Toronto and the University of Illinois in the 1960s and 1970s. The storm of activism of this era around the Vietnam War, civil rights and feminism prompted him and his peers to shift their focus from pure academics to applied research.

Anthropology — with its broad focus on culture, biology, environment, economics, history and more — is uniquely suited to provide insight into virtually any field of human activity, Ervin argues. .

“We need subjects who can make all these connections. Anthropology has the advantage of being where the rubber hits the road – seeing what’s really going on.

Since joining the USask College of Arts and Sciences in 1971, Ervin’s research topics have changed many times: from Arctic and subarctic Indigenous peoples to Saskatchewan farmers, children of Saskatoon, immigrants and refugees. In each case, he sought to understand the social and cultural effects of decisions and policies on people, especially the most vulnerable.

“I think in a range of humanities and social sciences, given their subject matter, you can’t help but develop a particular worldview, for example, a certain concern for the underdog,” Ervin said.

One of Ervin’s greatest research accomplishments was a pioneering study of community needs in Saskatoon for the United Way. Published in 1991 and involving 135 community organizations, the project amounted to an anthropological study of an entire city.

This study, along with two books and several other articles by Ervin, are regularly cited in introductory anthropology textbooks. Evin’s book Applied anthropology: tools and perspectives for contemporary practicefirst published in 2000, has been the most popular text on applied anthropology for over 20 years.

In 2017, Ervin became the first person outside the United States to be elected president of the Society for Applied Anthropology, one of the world’s largest applied social science associations.

As an applied anthropologist, Ervin has always considered advocacy part of his job. He played a major role in campaigns against nuclear power, a downtown casino, the Meridian Dam, and more.

His activism also extended to USask. Whenever budget cuts loomed or administrators proposed changes that Ervin believed would negatively affect students or faculty, he was among the first to speak out on campus and in the media.

“And did I ever have a lot of trouble,” Ervin said with a laugh.

He plans to continue speaking out on uncomfortable topics. One of Ervin’s first plans for retirement is to complete a book on political ecology in which he argues that capitalist societies cannot solve the climate crisis while maintaining continued economic growth.

“The only way out of this mess is degrowth, not growth,” Ervin said. “We robbed young people growing up and future generations. We stole them through our use of resources. We have to reduce our economy. It can’t happen all at once, but we have to reshape the whole animal.

Ervin’s retirement won’t be limited to work, of course.

“I’m going to delve into the natural history of the Acadian forest (of Nova Scotia),” he says. “I’m going to take it easy – you know, watch Netflix movies. Spending too much time on Facebook discussing politics.