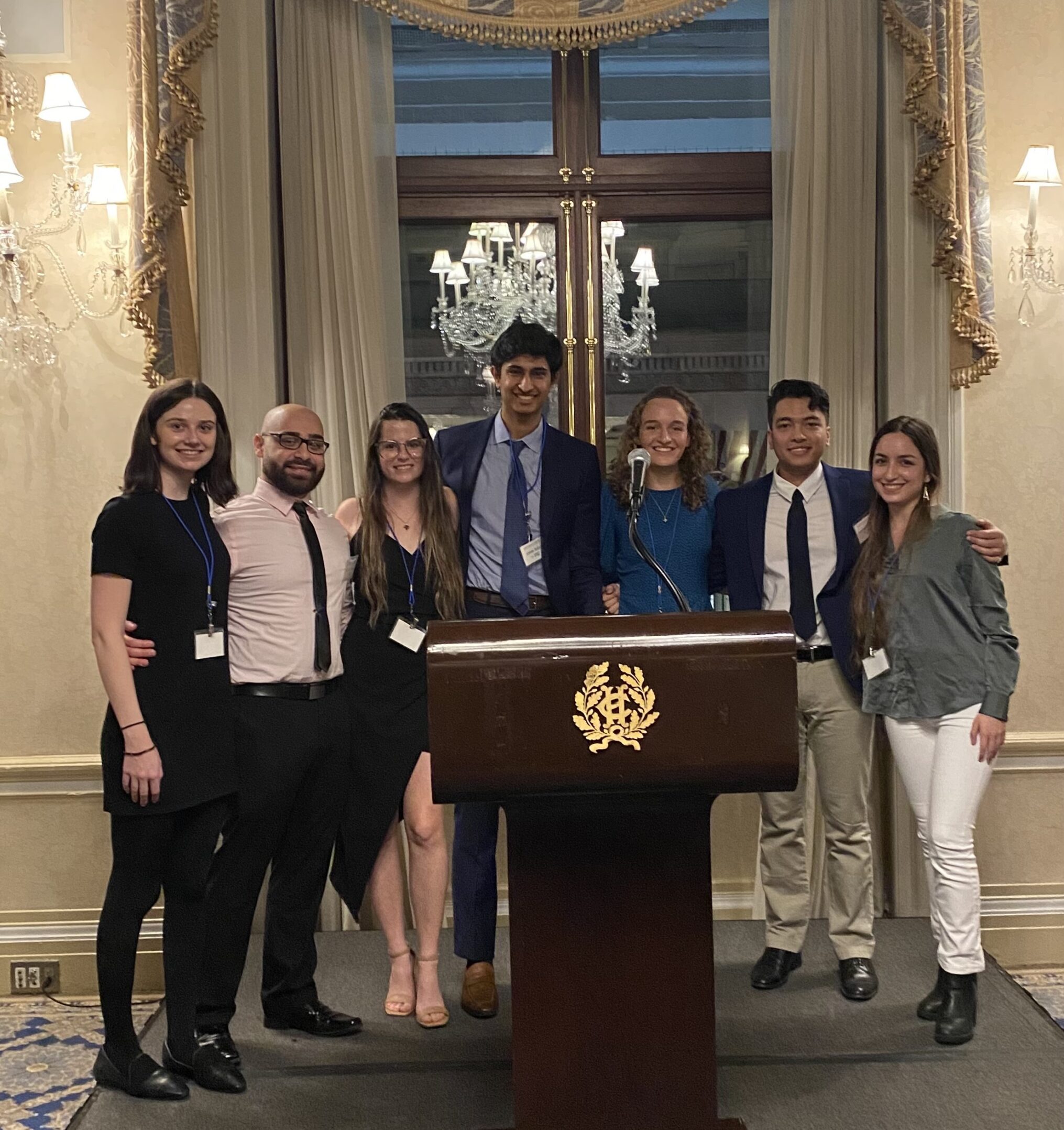 A group of students from Lehigh’s Martindale Student Associates Honors Program completed and presented their research journal to the Consul and Deputy Consuls General of Argentina at their Consulate in New York on November 18.

Each year, the program allows 12 students to travel to a chosen destination abroad and write an article on a topic related to that location. The papers are eventually published in the Martindale Center for the Study of Private Enterprise’s annual journal, Perspectives of Business and Economics.

Due to COVID-19, the 2020 cohort of Martindale students in Argentina had to conduct their research virtually and were the first in the program to publish their work on a country without ever setting foot there. Students researched a variety of topics such as food insecurity, infant health care, and the soy industry.

When the pandemic first appeared in the spring of 2020, Todd Watkins, executive director of the Martindale Center and professor of economics, was in Argentina. He never had the opportunity to return with that year’s cohort of students.

He said a lot of planning for the trip had already started by then.

“We had identified a lot of people in places that we wanted to visit and with whom we wanted to speak in Argentina, however, for obvious reasons we had to meet them on Zoom,” said Watkins.

Noah Jalango, 21, a member of the Argentina Martindale cohort, said the biggest downside of the pandemic was not being able to travel to Argentina.

“Usually we would visit Argentina before writing our articles and having the opportunity to ask questions of community members and visit relevant places,” Jalango said. “Not having the option to do that was a bit of an annoyance, as we had to do most of our research through Google and the program’s contacts. ”

Despite the challenges encountered, the collection of student work has been published and includes research in a wide variety of disciplines.

“Students follow their own instincts for their own sake,” Watkins said. “Sometimes they choose subjects that are directly relevant to their specialty, but often they don’t. We have engineers who write on social issues. We have social scientists, economists who write about technology or infrastructure issues or entrepreneurship issues. ”

Jalango’s work focuses on the creation of conglomerates and media monopolies in Argentina. As a journalism student at Lehigh, Jalango wanted to find a way to integrate media and journalism into his work.

He said there was a point in Argentina’s history when it was ruled by a military junta, referring to the period from 1976 to 1983 when the military staged a coup and took power. Meanwhile, some media outlets reported on the atrocities taking place under the dictator.

“I looked at that past to see how the different news outlets sort of grew and took over and bought out other small businesses to reach the huge point where they are today,” Jalango said.

Another cohort member, Kira Stevenson, ’21, focused her research on food insecurity in Argentina.

Stevenson said that after taking an economics class on child hunger and GDP, she looked at these issues from an Argentinian perspective to see if malnutrition rates were having an effect on her growth in as a country.

“Argentina is one of the biggest food exporters, but it has one of the highest rates of malnutrition in Latin America,” Stevenson said. “So I wanted to focus on the reason and the juxtaposition between being known for its products, but also having a problem with hunger. ”

After the diary was completed and published, it was featured at the event in New York City. Watkins said that on occasion the students’ work would be cited online by others, which he said is “fun” to see happen.

“I think the publication of this journal is a huge accomplishment for the students,” Watkins said.