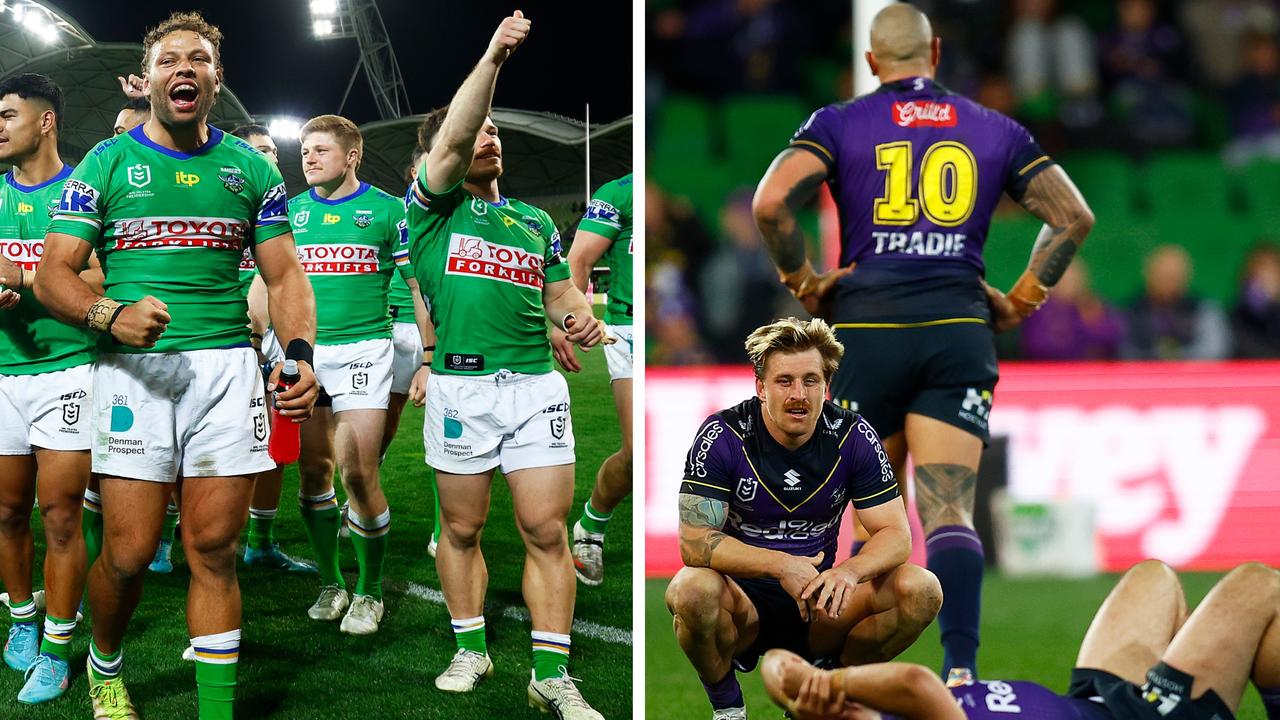 The Canberra Raiders continued their superb recent run at AAMI Park, upsetting the Melbourne Storm 28-20 on Saturday night to enter week two of the final.

“A monumental shake-up,” Dan Ginnane said in a comment.

“It’s usually mission impossible, but now they’ve beaten them at their own game,” Yvonne Sampson added of the Raiders’ win in Melbourne.

With the victory, the Raiders became the first team to win five consecutive games against the Storm in Melbourne.

It is also the first time since 2014 that Melbourne have been knocked out in the first week of the final, with Canberra set to face Parramatta in the semi-final next week.

The wild duo of Josh Papalii and Joseph Tapine led from the front for the Raiders, combining over 300 running yards in victory.

The Raiders had just 20% of the ball after five minutes after being forced to defend several sets down their own line.

But then Tapine unloaded for Wighton who exploded through the middle, beating several Storm defenders before moving on to Xavier Savage who linked up with Matthew Timoko.

Canberra’s cross then fearlessly fended off Munster to storm the corner and score the game-opening try.

First, Kenny Bromwich placed a deft grubber close to the line in the 13th minute as Nick Meaney ran over the ball, knocking it down.

Bromwich took the right option that time but soon after decided to kick again when a pass could have seen unmarked winger David Nofoaluma through.

Winger Xavier Coates made sure to capitalize on his opportunity as he raced into the corner in the 19th minute to score Melbourne’s first goal of the night.

On that occasion, Munster and Jahrome Hughes combined as Nelson Asofa-Solomona’s lead run drew in the Raiders’ defence, creating space on the outside.

This allowed Coates to start early on Sebastian Kris in cover defense, who just couldn’t get there in time.

In the space of four minutes, Coates had two tries to put the Storm ahead after a slow start.

In this case, it was Harry Grant’s intriguing work that sparked the try, the crafty rake darting to the left of the ruck before turning back towards Munster who ran in the opposite direction.

Munster then quickly passed it on to Hughes who “put it on a plate” for Coates, as Dan Ginnane put it in commentary with a pinpoint kick.

Then, in the space of four minutes, the game turned around as Canberra scored back-to-back attempts to take a 16-8 lead into the break.

Meaney continued to be targeted by the Raiders and again proved a successful strategy before half-time as Zac Woolford passed to Tapine who left it short for Elliott Whitehead to score.

The Storm scored 21 tries inside their own half – the most in the league – and didn’t hesitate to spread it early and strike first in the second half.

In this case, Munster and Hughes quickly returned the ball to Marion Seve who beat Kris and ran down the right edge.

Munster then moved back down the middle and found winger Xavier Coates inside who reached out to score his third try of the game in the 45th minute.

A dangerous tackle from Tapine on Hughes then saw the Storm offer a penalty kick, but Munster snagged it as the half-back ran up the sheds for a HIA test, passing later and returning to action.

Prior to that, though, one of Melbourne’s other playmakers had to stand with Hughes off the pitch and it was once again Grant who was causing all sorts of trouble for the Canberra defence.

After some intriguing plays earlier in the first half, Grant was back on as he capitalized on a change of direction and quick ball play from Jesse Bromwich.

Grant grabbed some slow Raiders defenders and then passed it to Nelson Asofa-Solomona who just couldn’t be stopped this close to the line to score in the 59th minute.

It looked like the Storm were on their way to another semi-final, but a big moment turned the game upside down.

In what Dan Ginnane described as a “huge call” in the comments, Raiders center Kris was not penalized after making contact with Cameron Munster in the air.

The Bunker ruled Kris had his eyes on the ball when he collided with Munster, who knocked the ball back, with the Raiders then forcing a retirement.

A few costly mistakes then gave the Raiders a privileged position and they took full advantage, albeit in unconventional circumstances.

On that occasion, a long pass bounced off Kris’s head and Jordan Rapana pounced before Fogarty converted from the touchline to seal the victory.

They may not be the storm of the past, with Cooper Cronk, Cameron Smith and Billy Slater all retired, but there’s still an aura around this Bellamy-driven Melbourne powerhouse.

Add to that the trip to the AAMI park and it’s easy to be impressed. But not Ricky’s Raiders.

They have now won five in a row in Melbourne – the first team to do so in NRL history – and the Fox League panel were full of praise for coach Stuart’s role in the iron spearhead of Saturday’s superb surprise.

“You’re talking about coaches enjoying the occasion, especially with the semis, and coaches emulating the kind of attitude or person the coach is,” Corey Parker said.

“Ricky Stuart has his team taking it personally, they have this mentality of us against the world, they really bond and rally around each other. They drag you into the trenches.

Parker said when playing in Melbourne in his career he sometimes “falls into the trap” of “respecting them too much” given how much the champion team has achieved.

“Ricky brings down the Raiders and they don’t respect Melbourne and that really irritates them,” Parker added.

“They take them,” added Gorden Tallis.

“I don’t think they’re afraid to play in Melbourne where I think a lot of guys go there and respect Melbourne… the Raiders go there and come back themselves.”

Cronk was one member of that Melbourne machine and even he was impressed with what the Raiders have achieved in recent years.

“That performance was top notch, it was just outstanding,” he said.

“There’s nothing you can do but take your hat off to Ricky Stuart. To be able to get that reaction, that connection, that confidence, the ability to come undone but also to step back with the ball in hand.

‘CAN YOU BELIEVE IT?’ FOGARTY TRY EXPOSES THE WEAKNESS OF THE STORM

Craig Bellamy’s decision to move Cameron Munster to full-back in recent weeks has proven to be a masterstroke and is understandable given how unpredictable he can be in attack.

Munster was heavily involved again on Saturday, with 193 yards running, four tackle busts and four offloads – but the decision to move him to the back came at a cost this time around.

The Raiders had a plan to target Nick Meaney, who had moved to five-eighth, in the defensive line and it paid off, leading to two tries.

Jamal Fogarty’s four-pointer, where he beat three defenders including Meaney who slipped, was of particular concern to Michael Ennis in the comments.

“Can you believe it?” Ennis asked.

“One of the best defensive units has seen the halfback waltz out of the scrum.”

It wasn’t so much that Munster had to come back to five-eighths for the whole game, but that Bellamy could have moved him at least in defence.

“I think it needs to be done, especially defensively,” he said in a comment.

“Great coaching from Ricky Stuart and his team executed it perfectly. Front row Nick Meaney missed two tackles on try and they need to make a change.

“It’s a big game, it’s a huge game and Craig Bellamy would know that. I don’t think he would think twice if it’s the best thing for his team.

While Canberra were unable to find the same success in the second half, those first two tries were indicative of the end result.

‘BIG FOUR’ COMES BIG AS TAPINE GOES TO ‘ANOTHER LEVEL’

The biggest names in Storm are experts at standing tall on the biggest stages.

But on Saturday it was some of Canberra’s stars who shone brightest to extend their season by a week.

Josh Papalii and Joseph Tapine combined to run for over 370 yards, 13 tackle busts and four offloads, the latter playing a key role in two tries.

Michael Ennis said Tapine was “on another level” while Cronk described Canberra’s front two rowers as “one of the best doubles in the competition”.

“Not only do they curve the line and create fast ball games, but they have the ability to offload, split and create a second phase,” he said.

It wasn’t just these two though, with Cronk also praising Jack Wighton and Elliott Whitehead for their roles in Canberra’s upset victory.

“Ricky Stuart went to his big four players, his leaders – Tapine, Papalii, Wighton and Whitehead – and they were the four best players on the pitch,” he said.

Wighton triggered Canberra’s first try of the game on an offload from Tapine and finished the game with two assists to go with 66 yards and three tackle busts.

“He [Tapine] was exceptional and Cooper was perfect, Canberra’s big four guns were exceptional,” added Parker.

“Papalii, especially in the second half, he was instrumental and he had to be.”