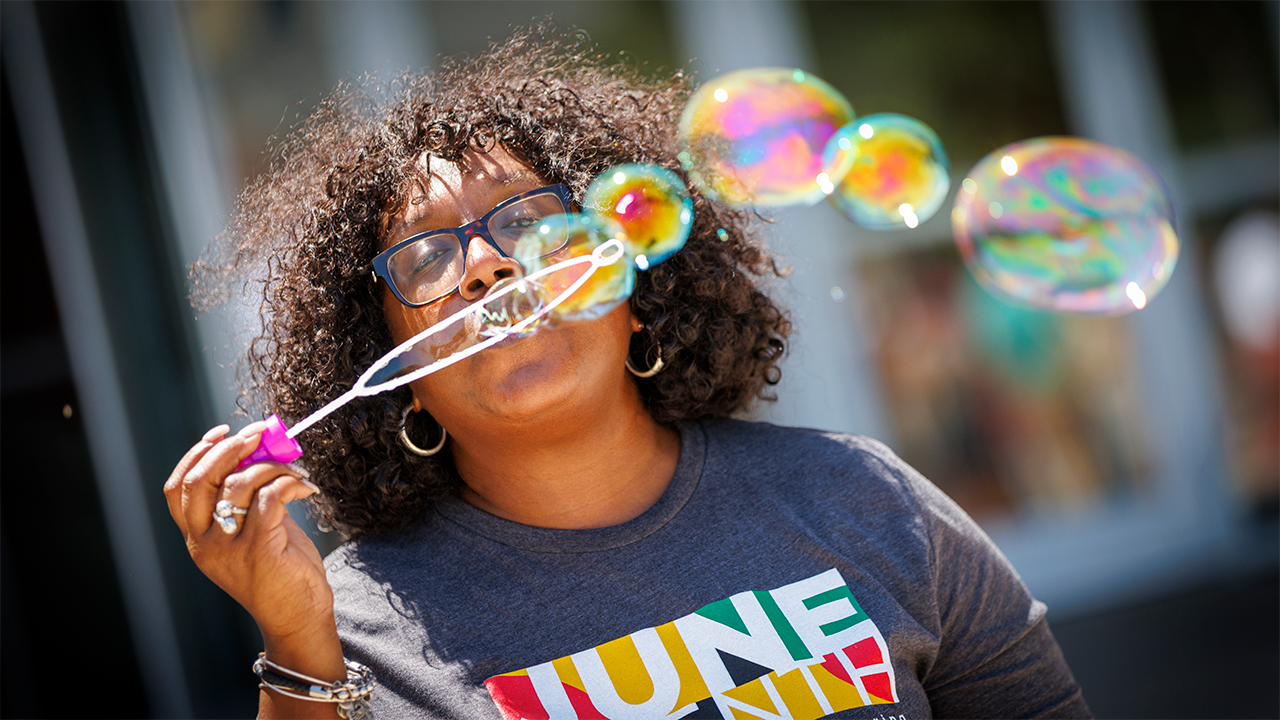 Against the backdrop of Broyhill Fountain, with bubbles and the notes of “River Deep-Mountain High” dancing in the 93-degree air, the University of Nebraska-Lincoln held its June 20 inaugural celebration at the Nebraska Union Square.

Coordinated by the Office of Diversity and Inclusion, the event drew students, staff, faculty and community members to observe what is considered the oldest African-American holiday – an officially recognized by the federal government in 2021.

The holiday commemorates the true emancipation of the many African Americans who, although designated free by the Emancipation Proclamation of January 1, 1863, continued to be enslaved until the end of the Civil War in 1865. The celebration marks specifically the arrival of federal forces. in Galveston, Texas, and the release of the last enslaved African Americans in the state on June 19.

Held under cloudless afternoon skies, the Nebraska U event offered a wealth of insight into the history and significance of Juneteenth, including Sheila Jackson Lee’s introduction to a bill to recognize the date with a federal holiday.

“This really represents progress for our university,” said Marco Barker, Vice Chancellor for Diversity and Inclusion. “We are often careful not to measure progress in terms of programs, but I think it’s more than that. He recognizes that as an institution, there are still opportunities to do more. For me, we are the ones who do more.

Carol Boehler, who coordinates the McNair Scholars program and admitted knowing little about Juneteenth until a few years ago, said she was grateful for the chance to learn more. She was accompanied by Lisa Rohde, associate director of teaching and research development in the Office of Graduate Studies.

“I think this is an important holiday to celebrate and recognize, especially for our students of color,” Rohde said.

While education and awareness were the order of the day, engagement and camaraderie followed closely behind. Volunteers fanned out across the square to operate kiosks that handed out drinks, t-shirts, wristbands and other promotional items. A sack game was underway within 30 minutes. A truck at the eastern end of the plaza offered a fruity respite from the heat in the form of shaved ice.

This university-approved vendor aligned with another goal of the event: to recruit black-owned businesses to partner with the University of Nebraska system. Doug Carlson, Director of Purchasing, was on hand to speak with contractors interested in winning a portion of the approximately $700 million in contracts awarded annually to vendors of university goods and services.

“There are so many great minority-owned businesses here,” said Nkenge Friday, deputy vice chancellor for strategic initiatives. “We want to be able to bring them to college and explore ways to hopefully be long-term partners. I think that’s a great starting point for that.

Both Friday and Barker pointed out that while the nature of the holidays naturally and necessarily asks Americans to look to the past, it can also serve as a fulcrum for acting on the present.

“We’re trying to do our part for people to see how they can be a part of celebrating June 19 — that it’s not just for particular communities,” Barker said, “but it’s really about of a broader effort to reflect on history, yes, but also to empower communities today.