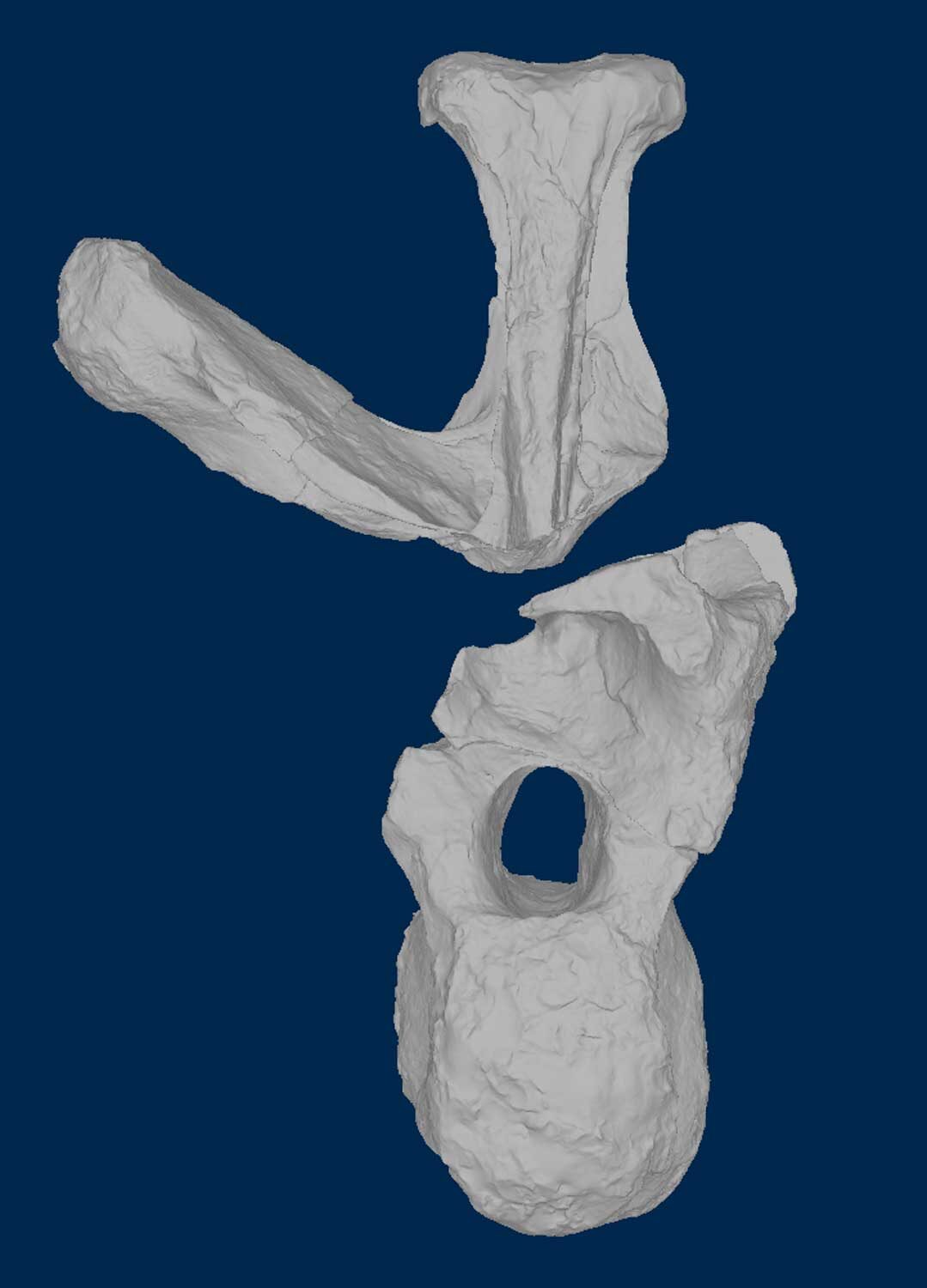 Study: A sauropod from the La Quinta Formation of the Lower Jurassic (Dept. Cesar, Colombia) and the first diversification of eusauropods at low latitudes

A medium-sized sauropod dinosaur inhabited the forested tropical lowland area of ​​the Serranía del Perijá in northern Colombia around 175 million years ago, according to a new study by an international team of researchers published in the Journal of Vertebrate Paleontology.

The new species is a long-necked, plant-eating dinosaur known from a single trunk vertebra about half a meter tall and wide. The vertebra bears a distinct pattern of bony struts that identify it as the new dinosaur species Perijasaurus lapaz (pear-EE-hah-SOW-roos la-PAHZ) – named in recognition of the mountainous region where it was found and for Peace of 2016 treaty that allowed scientists to continue their research decades after the discovery of the fossil remains in 1943.

Perijasaurus is the northernmost occurrence of a sauropod in South America and represents an early phase in their evolutionary history.

“This new genus and species in the paleotropes allows us to understand a little more about the origin of Jurassic sauropods, as well as how they set the stage for later Cretaceous sauropods,” said the lead author. study, Aldo Rincón Burbano, professor of physics and geosciences at the Universidad del Norte in Colombia.

The fossil was first discovered in 1943 during a geological mapping campaign by the Tropical Oil Company. The specimen was brought to the collections of the University of California at Berkeley and described in a preliminary way in 1955.

University of Michigan curator and paleontology professor Jeff Wilson Mantilla examined the specimen as a graduate student in 1997 and later developed a Fulbright Foundation-supported project to study early sauropod evolution in Colombia. .

As part of this project, the Colombian specimen was loaned to UM, where chief preparator William Sanders removed the glues and plaster, greatly increasing the visibility of anatomical detail and reducing the overall weight of the specimen.

“After reconstructing the fossil, we were able to better visualize the delicate bony lamellae that connect the protruding parts of the vertebra – the vertebral column, the intervertebral joints, the rib joints – the architecture of these connections provides critical morphological information that identify it as a new species and place it in the sauropod family tree,” Wilson Mantilla said.

A 3D model of the specimen is hosted on the University of Michigan Fossil Online Repository.

A conflict since 1964 between Colombian military forces, FARC guerrillas and paramilitary groups made it dangerous to conduct research in the Serranía del Perijá, near the Colombia-Venezuela border, until the 2016 peace accords .

Since then, the research team has been working to determine with greater precision where the fossil was found. A satellite image of the area was overlaid on a hand-drawn map from 1955 showing the location of the fossil. Another clue was provided by the sediment removed from the vertebra itself during the preparation process, allowing the team to determine the specific layer from which the bone was
collected. Fieldwork on the site and in neighboring localities has made it possible to reconstruct the paleoenvironment inhabited by the dinosaur.

“Perijasaurus lived in an environment of low slopes associated with a river and a wooded area. We found fine sand and leaf debris in the sediments deposited in the area where the vertebra was originally found, and this agrees with the sediments inside the neural arch of the vertebra, which are only preserved near a floodplain, i.e. near the slopes of a river, a wooded area,” said Daniel Raad, a former geology student at Universidad del Norte.

Most dinosaur finds in South America come from Cretaceous period rocks located in Argentina and Brazil. Dinosaurs from the northern part of South America are much rarer, especially during the Jurassic and Triassic periods, during the initial dinosaur radiation, when the landmasses were still substantially interconnected.

“Although Perijasaurus is represented by a single vertebra, this region of the skeleton provides the most information about sauropods, due to a series of laminae and other structures,” said Martín Ezcurra, paleontologist and associate researcher at the CONICET (Argentine National Institute). Scientific and Technical Research Council) and Chief Curator of Paleovertebrates at the Argentine Museum of Natural Sciences.

The researchers were able to determine the evolutionary relationships of Perijasaurus through computational analysis focused on Lower and Middle Jurassic sauropods.

“Perijasaurus is among the earliest radiations of sauropods, which include species from southern South America, Africa, Asia and Europe,” said Harold Jiménez Velandia, a geologist at the University of Caldas.

The presence of Perijasaurus in the paleotropes of South America, as well as its close phylogenetic relationship to geographically widespread species that inhabited low latitudes, suggests that sauropods diversified and dispersed quite rapidly following an event major anoxic at the end of the Lower Jurassic, when portions of the oceans became oxygen depleted over large geographic areas.

“What we see in the Lower Jurassic, both in high latitudes and in more tropical areas, is that sauropod species were evolutionarily and geographically interconnected, which has also been observed with other groups of carnivorous and herbivorous dinosaurs,” Ezcurra said. .

Sauropods are the largest animals to have walked on earth, with some reaching estimated lengths of 49 meters and weights of up to 57 metric tons. Their ability to support their weight and move their bodies efficiently stems from a series of adaptations aimed at reducing weight and increasing bone support.

An anatomical feature of sauropods is vertebral pneumaticity. Essentially, extensions of the air sac system of the lungs extend into the spine and actually remove internal bone, effectively lightening the skeleton.

“By the Late Jurassic, sauropods had developed highly pneumatic vertebrae riddled with airspaces that removed half to three-quarters of the weight of bones. Perijasaurus represents an evolutionary antecedent in which pneumatic invasions are much simpler and more limited in extent , removing less than a quarter of the bone volume,” Wilson Mantilla said.

He said the team will continue to focus on areas of Colombia exposed to Jurassic sediments.

“Colombia is becoming a country with great potential to contribute to the paleontology of the continent and the world,” said Wilson Mantilla.

Perijasaurus is permanently housed at the Museum of Paleontology at the University of California in Berkeley, California. The research was funded by the Fulbright Foundation, Universidad del Norte, Sam Welles Fund and CONICET.