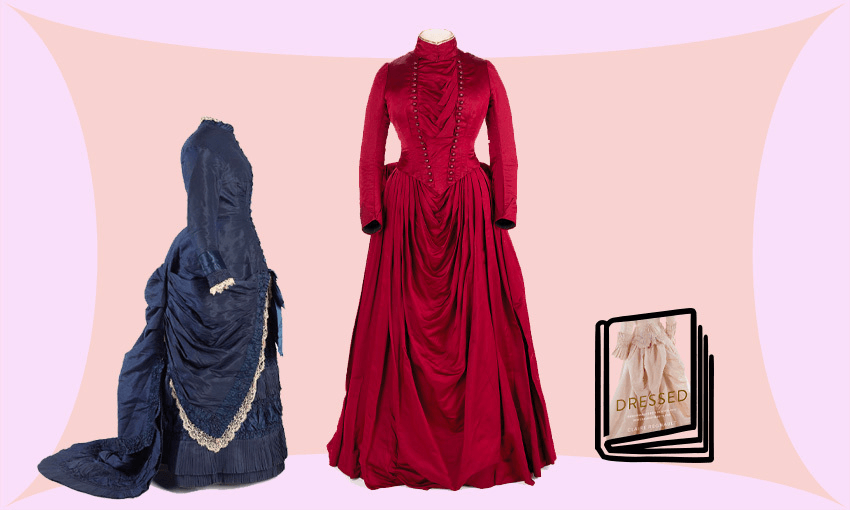 “Don’t judge a book by its cover” is a terrible metaphor. You shouldn’t judge people by their appearance, but you should definitely judge a book by its cover. It gives you essential details: the title, the author and a mood. It also gives you essential information about care and time. A book with a good cover has probably received a lot of love and effort.

Dressed is a book you can and should judge by its cover. To see: a beautiful beige dress, undulating on a millennial pink background. But then you pick it up and it’s like holding a particularly strong cushion. The cover is matte, padded with foam, with a sumptuous finish. You might as well be holding one of the garments that Regnault talks about (and which he examines with the kind of affectionate detail reserved for a scholar). How often do you find a book over 400 pages that feels good to read?

It makes sense that a fashion book – literally the human version of a book cover – would have such a great cover. But the quality of Dressed goes further. It is a meticulously researched and well-detailed look at fashion, an art and craft that can often be considered thrift. This is obviously not the case: the history of fashion is intimately linked to the history of the world. Fashion is art, fashion is economy, fashion is culture, fashion is function. World history didn’t happen naked (except for all the times it did, I suppose).

Regnault very early on summed up his thesis and the scope of his project: “Each item of clothing raises a series of questions: who made it? Who wore it and where, and what was their life like?

Regnault’s writing is, as expected, excellent. She talks about the clothes and the story behind them with a scholarly eye for detail and context. It’s impossible to talk about 19th century New Zealand history without talking about colonialism – hell, it’s impossible to talk about anything after 1840 without talking about colonialism – and fashion is no exception. The passages that discuss how fashion came to be a conversation between early settlers and Maori, with people on both sides drawing inspiration from the other’s culture generously and gladly, are particularly telling. (Note: I was fascinated by the amount of animal products used in our fashion, although I guess an albatross foot purse isn’t all that different from a crocodile purse , although a little less regal.)

Perhaps the most telling thing that Dressed quietly but confidently and consistently impresses on the reader is that New Zealanders cared pretty deeply about their fashion. What we wore wasn’t just vanity, it was deeply functional. Clothing had to withstand work, play and life, and so people, especially women, often had things made to measure, choosing their materials. It’s a trend we hope to return to – this idea of ​​having designer clothes rather than just, say, your average Hallensteins costume or AS Color t-shirt.

Regnault’s writing is particularly delightful when it focuses on specific people and incidents, like Hūria Mātenga (pictured above), a Maori woman who largely preferred to buy her dresses in Europe rather than have them made in Nelson. Regnault uses this as a way to point out other developments (by the 1870s “most Māori” had adopted European-style clothing in addition to or even replacing their own clothing). Each one is a reminder: as a garment is made of countless materials and threads, history is made of countless people. What people did is important, but what people wore is an important layer of context and information.

Regnault is not lacking in humor either, she is aware of the hypocrisies and eccentric mores of the time. One of my favorite passages, in the “working woman” section, revolves around Hilda Hitchings, a 5’11 woman who won the New Zealand women’s tennis championship in 1894, but who, we are assured, -on ironically, was also “well versed in those domestic tasks which make the salt of life and without knowing which no girl can be called educated”. Message received!

She spends several pages talking about the Ranfurly Ball at Government House in 1898, which a Lavinia Coastes attended as Queen Elizabeth, in a “beautiful dress of black velvet, bodice and sleeves of white quilted satin braided with silver and pearls”. It’s a great way to discuss several elements of fashion – not only what people saw as fancy dress, but also the undeniably racist stereotypes people indulged in at the time (Charles William Cox dressed as “head of what is it”).

Regnault’s vivid descriptions are supported by both archival and current photos, and it is the current photos that make Dressed such a vital and fascinating document. Dozens of garments were specially mounted on custom mannequins for photography – a process that is described in detail near the end of the book. In a meeting with Te Papa Press, she makes an astute observation that part of the reason a book like this hasn’t been done in nearly 50 years is because of the difficulty and expertise involved in making it. photography.

“It’s not just about dragging the garment from its box onto the shoulders of a form of ready-to-wear,” Regnault said. “Their shoulders are too broad, their waist and bust often too big.” Each piece of clothing has also, obviously, gone into a huge amount of thought about how it looks – from framing, to lighting, to angle, as explained in the final section of the book: “Good lighting captures the true nature of the material and translates the visual into visceral, like the dazzling sheen of silk satin or the sumptuous texture of velvet.

The work paid off.

Seeing photos of clothes in Dressed is about as good as seeing them in person. You can see every crease and wrinkle in a purse made from an albatross foot (above, crude as that sounds); every fold of a wedding dress. In the middle of the book there is even a sample of patterns used during the period, captured in great detail – get me the “silk velvet with trimmings” used in the 1860s, stat.

Dressed argues that judging a book by its cover (quilted, soft, truly lovely) is not only appropriate, but possibly appropriate. By looking at what people wore, in what context and why they wore it, we can learn endless amounts. It’s more than dresses, beautiful dresses, it’s history, a beautiful story.