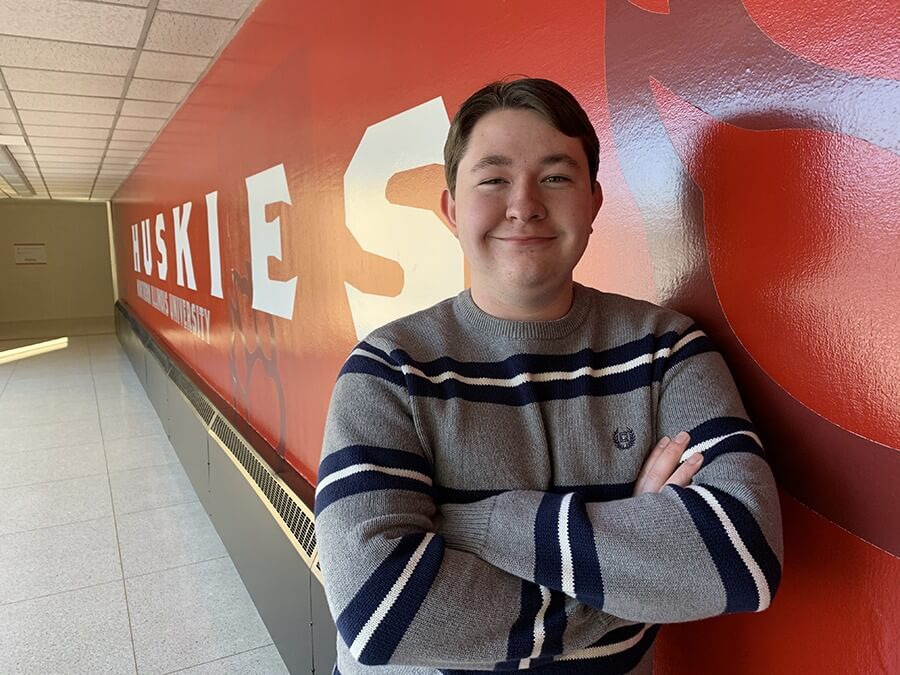 DeKalb, Ill. – You can no longer call Jeremy Knoll a Research Rookie.

NIU junior Jeremy Knoll will be publishing his research on Illinois Civil War monuments over the summer.

The Springfield junior, who chose NIU in part because of its Research Rookies program, is already receiving the kind of attention more typically reserved for the doctorate. university students and professors.

In his sophomore year, Knoll conceptualized and performed an analysis of Illinois Civil War monuments for research recruits. Last fall, he presented his findings at a conference attended by graduate students and state historians. And this summer the research, with Knoll listed as sole author, is expected to be published in the Journal of the Illinois State Historical Society, the premier historical journal for the history of Illinois.

“This is a very good, very professional article,” said David Joens, director of the Illinois State Archives and guest editor of the magazine’s issue featuring Knoll. Joens, who also happens to be a former NIU student (class of 83), says it’s “very rare” for an undergraduate to publish in the newspaper.

Hall of the Grand Army of the Republic in Aurora, consecrated in 1878. The commemorative building was intended to serve as a public library. Source: Aurora Area Convention & Visitors Bureau

Knoll’s study examines the construction of Civil War monuments in Illinois from 1865 to 1929, when the Great Depression ended construction of such monuments. Through analysis of period newspaper articles and speeches about monument dedications, he shows the changes in who was behind the monuments, the sources of funding, the rhetoric around the dedications and, ultimately, the motivations of the dedications. monument builders themselves. The themes have changed to suit the context of their time.

Perhaps most notably, he discovered that the cause of the end of slavery, important to early monument builders in the decade after the Civil War, was almost completely erased from the dedications of monuments to the 20e century. Instead, these ceremonies focused on reconciliation between North and South, a finding relevant to today’s conversations about race, social justice, representations of the past, and appeals from other states. the suppression of Confederate monuments.

It was Knoll’s roots in Springfield, where Abraham Lincoln practiced law and became known, that led him to bring up the subject.

“I grew up in Springfield around the same time as the construction of the Abraham Lincoln Presidential Library and Museum,” he says, adding that his family nurtured his passion for history by visiting the fields of civil war battle.

The top student in his high school, Knoll had several full scholarship offers for the college and made a number of campus tours. “NIU was the only university where I thought I had a good chance of not only doing undergraduate research, but also getting paid for it,” he says.

NIU’s Research Rookies program encourages undergraduate students to conduct faculty-guided research and rewards students who complete their projects with a stipend of $ 500. He enrolled at the NIU, with a double major in history and economics, with a minor in German language and culture studies. In his first year, he completed his first Civil War Prisoner of War Research Rookies project, with Professor Brian Sandberg as a mentor.

Then, before his sophomore year, while Knoll was an intern at the Lincoln Presidential Library, his family moved to Indianapolis. It was there that he was struck by the imposing grandeur of the Monument to the Soldiers and Sailors of the State of Indiana, an iconic symbol dedicated in 1902 in honor of the Civil War and other veterans.

“For me, this raised questions: why did ancient Americans put so much emphasis on the creation of these monuments? ” he says. “Many communities in Illinois and across the country have these types of monuments in their plazas or near their courthouses.”

The Illinois Memorial in Vicksburg, Mississippi, pictured here in the early 20th century. The state of Illinois spent more than 20% of its annual budget on the memorial. Source: Detroit Publishing Company Photograph Collection, Library of Congress

Knoll brought his idea for a study of Illinois monuments to Aaron Fogleman, a distinguished research professor who served as a sounding board throughout the project.

“By the end of his second year, Jeremy was producing work compatible with that of advanced graduate students,” says Fogleman. “He made important discoveries regarding Civil War monuments in Illinois that help us better understand how changing historical circumstances in subsequent generations affected the memory of the war and its purpose.”

Knoll, an honors university student whose work is also supported by the NIU’s McKearn Fellows program, found that the reasons for building local monuments had received little research. But there was a treasure trove of sources.

“Local newspapers covered the events leading up to and included the dedication, and they almost always reprinted the dedication addresses, which became the foundation of my research,” Knoll explains. “When you compare dedications from different places in Illinois, they share some common themes. “

Perusing newspaper archives, Knoll analyzed the history of more than 40 of the 100 Civil War monuments across Illinois, as well as some erected outside state lines.

In the article for publication, he presents his subject matter with a startling account of the Illinois State Memorial, inspired by the Pantheon, located in Vicksburg, Mississippi. The state of Illinois spent more than 20% of its annual budget on the memorial. At its inauguration in 1906, school children sang “Dixie” and “America,” while Mississippi Governor James Vardaman gave a speech alternately praising the Illinois delegation while affirming his belief in white supremacy.

Knoll goes on to reveal the main motivations behind three periods of construction of monuments that he identifies. While all of the monuments were dedicated to the Civil War, each was a product of its distinct era.

Plates affixed to the Lincoln Soldiers Memorial list the names of those who served in the war. “Many of these monuments list the names of soldiers, in part to provide them with a grave if they didn’t have one,” Knoll explains. Source: Jeremy Knoll

The first period spans the Reconstruction Era, from 1865 to 1877, when commemoration focused on commemorating the “unknown dead,” consoling grieving families and expressing anger against Confederation. The dedications were a local matter, and usually financed locally. For those who had lost friends and relatives, betrayal and slavery had caused these painful deaths, and both were appropriately vilified.

“The Civil War was the first conflict in US history where so many missing or killed were never sent home to be buried,” says Knoll. “Many of these monuments list the names of soldiers, in part to provide them with a grave if they didn’t have one.”

The next period ran almost until the end of the 19e century. Local branches of national veterans’ or women’s organizations such as the Grand Army of the Republic often organized fundraisers. Dedicatory speakers were more receptive to the reunion between North and South, but they continued to condemn both the Confederate cause and slavery.

In his article, Knoll writes: “The 1880s and 1890s finally represented the zenith of emancipation as a commemorative theme, as it largely faded from popular consciousness with the turn of the twentieth century.

During the Spanish-American War of 1898, Northerners and Southerners fought side by side. It is no coincidence that this marked the beginning of the last period of construction of the monuments of the Civil War. It was characterized by a willingness to embrace Southerners as both fellow Americans and brave adversaries, which led to an abandonment of emancipation as a commemorative theme.

“By the 20the century, abolition has increasingly been sidelined in favor of viewing war in a more favorable light, ”says Knoll, who believes his findings are relevant to today’s public.

“It shows how the context of our time influences the way we remember and commemorate historical events,” says Knoll. “There is a lot to be learned from the monuments of the Union.”

Northern Illinois University is a nationally recognized, student-centered public research university with expertise that benefits its region and spans a wide variety of fields including the sciences, humanities, the arts , business, engineering, education, health and law. Through its main campus in DeKalb, Ill., And its student and professional training centers in Chicago, Hoffman Estates, Naperville, Oregon and Rockford, NIU offers more than 100 fields of study while serving a student body diverse and international.