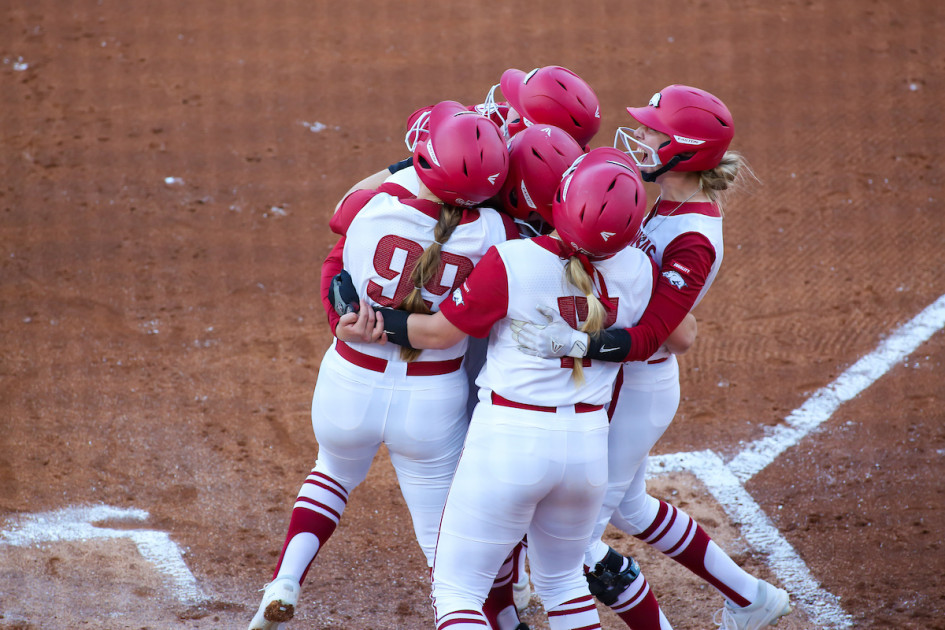 No. 8 Razorbacks take series against No. 22 LSU

FAYETTEVILLE, Ark. – No. 8 Arkansas earned its third straight series victory over No. 22 LSU with a 7-3 victory in Monday night’s series finale at Bogle Park.

The Razorbacks combined for 12 hits for the second time in the series. Sophomore Jenna Bloom (8-0) picked up the win after pitching the first 4.5 innings of the game, allowing three runs on three hits and two strikeouts.

Chenise Delce had her second save of the season after taking the mound in the fourth, throwing three scoreless frames and delivering one strikeout while allowing just three hits.

Arkansas set the tone early, fabricating a five-run first inning to take a permanent lead. It all started with KB Sides, Hannah McEwen and Taylor Ellsworth punching back-to-back singles to begin the dominant offensive outing. Danielle Gibson was then hit by a pitch to bring Sides home for the first inning of the game. A few shots later, Linnie Malkin sent him the first pitch over the center court wall for his second Grand Slam of the year.

The Hogs remained quiet until Kacie Hoffman doubled out, RBI single to the left, tackling a burnt-out Raigan Kramer from second. Ellsworth added insurance with an RBI single down the middle for the Razorbacks’ seventh inning of the night.

Five different Razorbacks recorded two or more hits against the Tigers with Sides leading with three. The sides proved automatic all night, connecting on back-to-back singles in the first and third before burning the line for a field single in the sixth. Malkin had four runs and two hits, including his grand slam in the first, to beef up the Razorback offense. Hoffman threw two singles with an RBI. Ellsworth pieced together another solid performance with two hits and an RBI. McEwen stayed hot on the dish after compiling two on the night. Danielle Gibson hit a single that bounced off the Tigers second baseman and recorded an RBI after being hit by a pitch with loaded bases.

Arkansas travels to Ole Miss for a three-game series from April 1-3. All three games will be broadcast on SEC Network+.