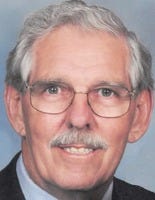 Patrick Thomas “Pat” Bearer of Fairlawn, OH passed away peacefully at age 84 on May 16, 2022, after a brief period of illness. A simple man, Pat was easily entertained, easily impressed, and content with the ebbs and flows of everyday life. He was blessed with a tireless work ethic and rarely, if ever, complained about anything.

Pat has spent his entire life as a resident of the Akron area, graduating from Akron Central High School in 1956. A longtime member of the International Brotherhood of Teamsters, Pat has spent much of his professional career in the trucking industry. He got his start with All States Trucking, which over the next few years became part of Pacific Intermountain Express (PIE), with whom he remained for more than two decades before eventually moving to Consolidated Freight (CF). After first “retiring” in 1995, he continued to work for the City of Fairlawn in the street maintenance division, from which he finally retired in 2009.

He nurtured several hobbies throughout his life, including wine and beer making, classical music and opera, local history, and genealogical research. Apart from his family however, his greatest passion in life was football, which he played as a youngster and followed intensely throughout his life. Many happy Sundays were spent watching football in the company of close family. A devoted Cleveland Browns fan, he never gave up hope that next year could be “the right one”…

As we mourn his passing, we celebrate his life and his legacy. Calling hours will be Tuesday, May 24 at 10:30 a.m. at St. Hilary’s Parish (2750 West Market Street Fairlawn, Ohio 44333) with a funeral mass beginning at 11:30 a.m. The family kindly requests that attendees wear masks. Interment will be at Holy Cross Cemetery in Akron. Memorial donations in Pat’s name may be made to a charity of the donor’s choice.