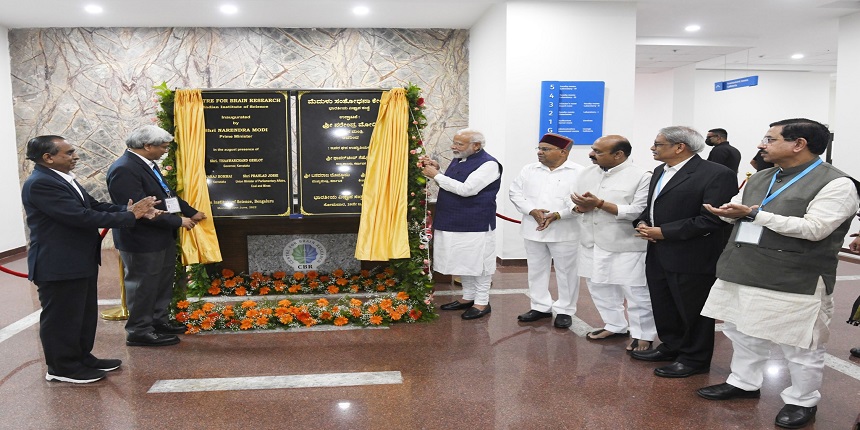 CBR is being developed as a one-of-a-kind research center and is focused on conducting lifesaving research to provide evidence-based public health interventions to manage age-related brain disorders, officials said.

Karnataka Governor Thaawarchand Gehlot, Chief Minister Basavaraj Bommai, Union Minister Pralhad Joshi, Co-founder of IT company Infosys S Gopalakrishnan and his family were among those present at the event.

The Brain Research Center was established as an autonomous, nonprofit research organization within the IISc, thanks to the generous gift of Gopalakrishnan and his wife Sudha Gopalakrishnan, officials said.

CBR is philanthropically funded and receives research grants for specific projects from several granting agencies, they said. Gopalakrishnan has also provided funds for the construction of the state-of-the-art building for use by CBR within the IISc campus, and his philanthropic donation is the largest support given by an individual for scientific research in Indian history.

The Bagchi Parthasarathy Multi-Specialty Hospital, the foundations of which were laid today, will be developed on the campus of IISc Bengaluru and will help integrate science, engineering and medicine in the prestigious institute.

It will give a major boost to clinical research in the country and strive to find innovative solutions that will help improve health services in the country, officials said.

IISc partnered with philanthropists Susmita and Subroto Bagchi, as well as Radha and NS Parthasarathy, in February to establish the Bagchi-Parthasarathy Hospital. “The couples will collectively donate Rs 425 crore (equivalent to approximately $60 million) to help build this 800-bed non-profit multi-specialty hospital. After its founding, this is the largest private donation important received by IISc,” said the director of the IISC, Professor Govindan Rangarajan.

Subroto Bagchi and NS Parthasarathy were co-founders of Mindtree, an information technology consulting and services company headquartered in Bengaluru. “It’s not so much about charity as being charitable.

The essence of being charitable is to develop empathy for others. To feel for others. To be sensitive. These are values ​​that were instilled early on by parents on both sides of the family,” Susmita told PTI.

“We’ve followed in their footsteps in small ways all along. When we lived in the United States in (the) 1990s, we were very touched by how everyone in the community engages on issues. The way they volunteer and help. It helped us to get committed to the institutions when we returned to India,” she added.

On what prompted the couple to make the big donation to IISc, Radha had said that they had worked hard and now with the resources in their hands, they believed that these resources had come down to them by fate.

“We believe that these resources have been placed in our hands by fate and should be used for ‘Vasudhaiva Kutumbakam’ – the common good of the people. The pandemic has pushed a sense of urgency. Our intention was to use them for education and/or healthcare,” she told PTI. The hospital is expected to be operational by the end of 2024.

(Except for the title, this story has not been edited by Careers360 staff and is published from a syndicated feed.)