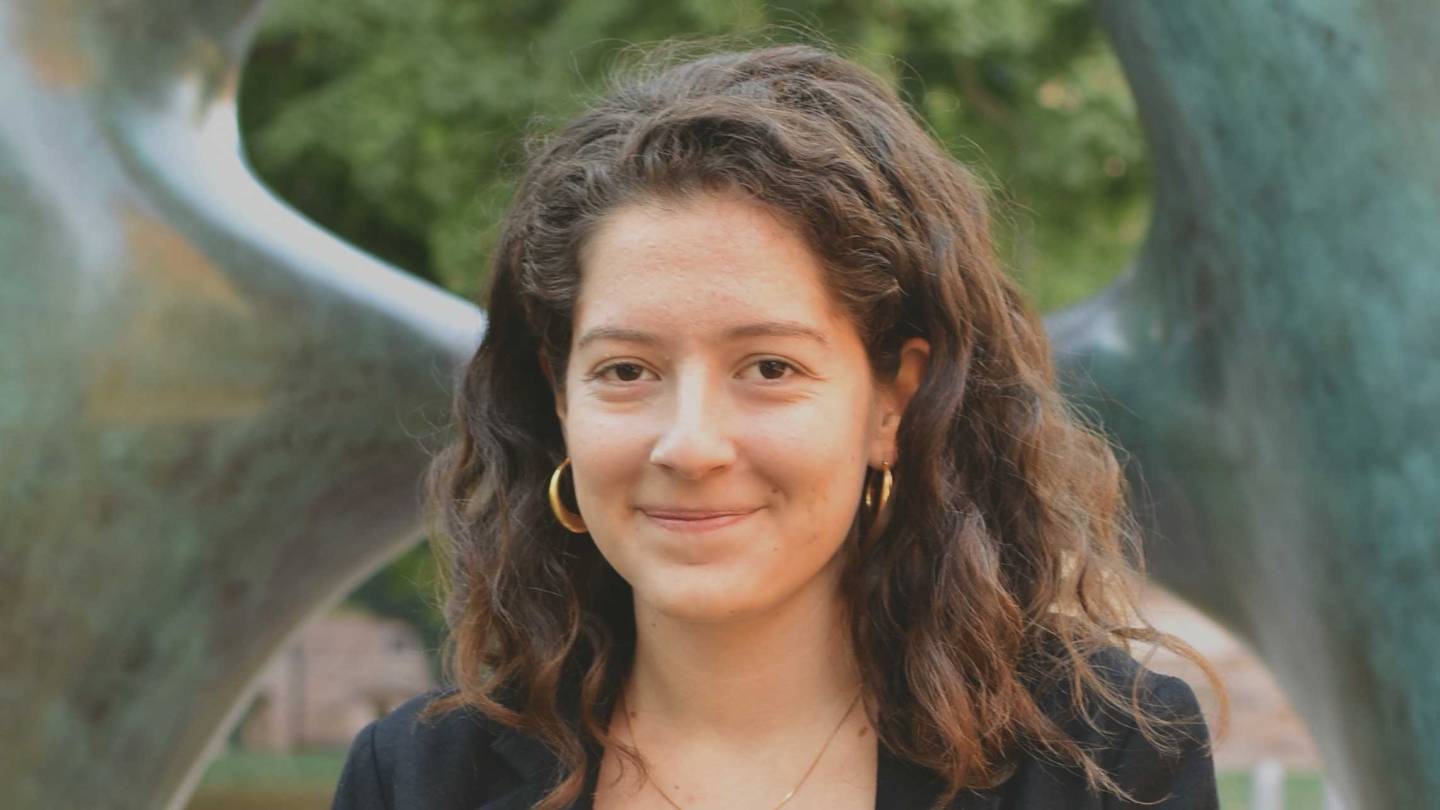 Marie-Rose Sheinerman, a senior at Princeton University, received a Rhodes Scholarship for postgraduate studies at the University of Oxford.

Sheinerman is one of 32 American recipients of the prestigious scholarships, which fund two to three years of higher education at Oxford. In a statement, Elliot Gerson, U.S. Secretary of the Rhodes Trust, said of this year’s Rhodes Scholars representing the United States, “They inspire us already with their accomplishments, but even more so with their values-based leadership and their selfless ambitions to improve their communities. and the world.”

Sheinerman will join an international group of Rhodes Scholars chosen from more than 60 countries. Individual countries announce their recipients on different schedules.

She will begin her studies at Oxford in October.

Sheinerman, from New York, focuses on the story and is also pursuing a certificate in Russian, East European and Eurasian Studies. At Oxford, she will pursue a master’s degree in history. She is a member of Whitman College.

While an intern at the Miami Herald in the summer of 2021, Sheinerman was part of the reporting team that received the 2022 Pulitzer Prize for Breaking News Reporting for “urgent but comprehensive coverageof the collapse of the Champlain Towers South condominium in Surfside, Florida. She led a signature on a key story in the Pulitzer entry and contributed to other stories included in the winning package.

She has been editor of the Daily Princetonian since January, where she manages a staff of over 300 students. In this leadership role, she has help to spearhead equity initiatives, including a financial allowance for low-income staff members, pre-professional mentorship programs, and special numbers that hope build trust with marginalized communities among newspaper readers.

She is a former member of Behrman Undergraduate Society of Fellowsa group of juniors and seniors who are dedicated to the study of humanistic research, and previously served as a member of the student council of the Center for Jewish Life in Princeton.

In his academic work, his independent research has combined his passions for history and journalism.

In the fall of 2021, she attended “The Ghetto” junior seminar, taught by Yaacob Dweck, professor of history and the Judaic studies program. “She wrote a brilliant research paper on one of the few Jewish women from the pre-modern period whose writings survive, Sara Coppia Sullam (1592-1641),” Dweck said. “Through an analysis of Sullam’s correspondence with Ansaldo Cebá, a priest from nearby Padua, Marie-Rose demonstrated that Sullam’s relationship with Cebá was fraught with conversion pressure even though it was based on a mutual intellectual admiration.”

Sheinerman, who is fluent in Russian, said his senior thesis – tentatively titled “Louis Fischer, Walter Duranty and Gareth Jones: Case Studies of American and British Journalism of the Ukrainian Famine, 1932-1933” – analyzes “the reporting of three of the most prominent journalists who worked as foreign correspondents in the Soviet Union in the early 1930s – examining how their disparate methods led to their failures and successes in telling the story of the famine.

Dweck, her senior thesis supervisor, praised her scholarship and dedication to the field of journalism.

“Marie-Rose is a strong advocate for social justice, and she is equally passionate about factual accuracy,” he said. “She has the potential to be a journalist of the caliber of Gail Collins or Jodi Kantor, someone whose reporting and opinion writing can and will shape the public sphere for decades to come.”

“Everywhere you look in the United States, local newspapers are shutting down, the media is being swallowed up by large multinational corporations, and if you lift your head and look further, journalists are under attack, whether in rhetorical terms or real,” he said. said. “The world desperately needs excellent journalists who don’t rush to judge, who assess before they speak, and who aren’t afraid to go to great lengths to get a tough question answered. Marie-Rose has all the makings of an extraordinary journalist.

In her Rhodes app, Sheinerman captured the fuzziness of the first 24 hours of coverage of the Surfside collapse – when she recorded stories from her phone as she crouched on the sidewalk, working side by side with national reporters such as CNN’s Wolf Blitzer – and how her editor put her on a different path:

“With the tragedy unfolding in our backyard, the Herald could tell the stories that a national reporter landing now wouldn’t think. With a major Orthodox synagogue just six blocks north of the collapse, the victims were disproportionately Jewish. Amid unfathomable grief, the community was still preparing for the Sabbath.

The story, which focused on synagogue members supporting families with everything from boxes of candles and challah to advice on planning burials according to Jewish law, was published before sunset. In his Rhodes candidacy, Sheinerman wrote, “Perhaps humanity’s greatest need is for stories – especially, those crafted by members of the communities they represent.”

Joe Stephens, lecturer at the Council of the Humanities and Freshman Seminars, Ferris Professor of Journalism-in-Residence and Director of the Journalism Program, said of Sheinerman’s Rhodes Award: “You could hear me screaming with excitement from the other side of campus. Marie-Rose is a rare talent and a brilliant and wonderful person.

He continued: “Perhaps the most impressive thing about Marie-Rose is that, despite all her accomplishments at such a young age, she shows no signs of letting this massive success go to her head. She is humble and smart when it comes to asking for advice. She worked hard to share her success and build community among her peers on campus. Under his leadership, The Daily Princetonian has become essential reading for everyone at Princeton. She brought the newspaper resolutely into the digital age. The Rhodes is just another testimonial that we will be hearing about for many years to come.

Sheinerman’s international experience while at Princeton includes an editorial internship at The Bubble in Buenos Aires in summer 2019 through Princeton’s International Internship Program.

In addition to her internship at the Miami Herald — funded with the support of a Ferris Summer Scholarship for Journalism Student Internshipsshe completed internships at Bloomberg News in the summer of 2022 and the Jewish Daily Forward (remotely) in the spring of 2021 and was a Journalism Fellow (remotely) for Tablet Magazine in the fall of 2020. In the summer of 2020, she was named an Oscar S. Straus II Fellow in Criminal Justice by the Guggenheim Foundation and secured funding for a remote internship at the Correctional Association of New York, a nonprofit organization dedicated to data-driven surveillance and to prison reform in New York.

In addition to the Pulitzer, Sheinerman’s reporting has received awards and been recognized as finalists by Investigative Reporters and Editors, Religion News Association, and New Jersey Press Foundation.

This is the third year that American Rhodes Scholars have been elected entirely virtually, with all nominees and selectors participating digitally.

Sheinerman was at the Lewis Library when she received the news via Zoom from her district committee: Upon learning that she had won the Rhodes Scholarship, she said, “I called my mom and started crying. I could barely speak or breathe, I felt so overwhelmed. I still feel so overwhelmed. I am so, so grateful to the many people whose mentorship and trust in me made this insane thing possible. The last thing in the world is my only achievement: it belongs to my parents, my grandparents, my friends, my professional and academic mentors, and dozens of people whose stories have touched my life.

About going to Oxford, she said: “I I am so excited to learn not just from Oxford faculty, but perhaps more importantly from my peers, including other Rhodes Scholars. A part of my deepest and most meaningful learning during my stay at Princeton — academically, journalistically, and personally — has gone through conversations and friendships with my peers.