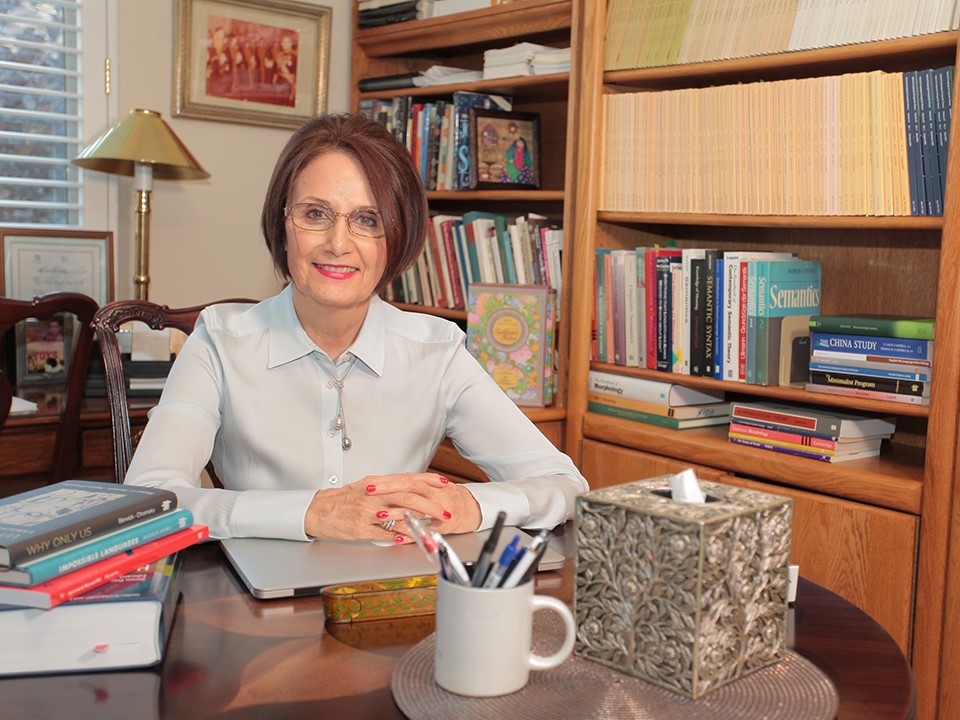 The grant will fund a professorship in Iranian linguistics and graduate scholarships in Persian and Iranian studies.

A $2.5 million charitable grant to the University of Arizona from the Roshan Cultural Heritage Institute will advance Persian and Iranian scholarship and support an endowed chair and graduate scholarships.

Part of the grant — which comes from the Roshan Cultural Heritage Institute Fund, a fund advised by Silicon Valley Community Foundation donors — will establish the Elahé Omidyar Mir-Djalali Chair in Iranian Linguistics. The remaining $1 million will fund the Elahé Omidyar Mir-Djalali Graduate Scholarships in Persian and Iranian Studies. Both the chair and fellowships are endowed and will continuously support faculty and graduate students in these fields.

The chair and fellowships are named after the founder and president of the Roshan Cultural Heritage Institute, a private foundation focused on the preservation, transmission and teaching of Persian language and culture.

“The study of languages ​​and cultures is essential to understanding the rich diversity of an increasingly globalized world,” said Robert C. Robbins, president of the University of Arizona. “I am extremely grateful that the Roshan Cultural Heritage Institute has again invested in the University of Arizona, helping us to build a world-class program of Persian and Iranian studies, to advance critical research and to train the next generation of scholars.”

Over the past 20 years, the Roshan Cultural Heritage Institute has invested $6.35 million in Arizona. He supported the establishment of the interdisciplinary Roshan Graduate Program in Persian and Iranian Studies, housed at the Graduate College, as well as graduate scholarships and four endowed faculty positions.

“During my tenure as Dean, I witnessed how grants from the Roshan Institute of Cultural Heritage elevated the stature and impact of the university’s strong Persian and Iranian studies program,” said John Paul Jones III, who completes his 12-year term as Don Bennett Moon dean of the College of Social and Behavioral Sciences this month. “By supporting both faculty and students, this transformative new grant places the University of Arizona at the forefront of universities for Persian and Iranian studies. I am deeply grateful to the Roshan Institute of Cultural Heritage and the Dr Elahé Omidyar Mir-Djalali for their vision and generosity.”

Mir-Djalali, founder of the Roshan Institute of Cultural Heritage, born in Iran, is a renowned linguist and expert in language teaching, cross-cultural communication and Persian studies. Mir-Djalali holds a doctorate in linguistics from the University of Paris-Sorbonne.

“We are thrilled to partner again with the University of Arizona and strengthen our support through the creation of this new Endowed Chair in Linguistics and Graduate Scholarships,” Mir-Djalali said. “This endowment will promote and strengthen the graduate study of Persian and Iranian languages ​​and linguistics and would position the university’s interdisciplinary Roshan graduate program as one of the largest and most important Persian programs in the United States. I am personally proud to have witnessed all the great work this university has done over the years to promote and preserve the Persian language and culture and look forward to the impact it will have on future generations teachers and students for years to come.

“Support from organizations such as the Roshan Cultural Heritage Institute is vital to the university’s research enterprise,” said John-Paul Roczniak, president and CEO of the University of Arizona Foundation. “The Roshan Cultural Heritage Institute has consistently invested in the University of Arizona program for 20 years, establishing endowments that have allowed it to grow and sustain it for decades.”

The Elahé Omidyar Mir-Djalali Chair in Iranian Linguistics, which will be housed in the linguistics department of the College of Social and Behavioral Sciences, will initially be held by linguistics professor Simin Karimi, who specializes in theoretical syntax and studies the syntax and morphology of various Iranian languages. Karimi also leads the National Science Foundation-supported Iranian Linguistics Research Group, made up of UArizona faculty members and students studying the linguistic properties of Iranian languages, including Balochi, Ossetian, Pashto, Persian and Sorani-Kurdish.

Karimi says most Iranian languages ​​are understudied but exhibit complex properties that can provide a better understanding of the nature of human language. Karimi plans to use the chair money to hire a postdoctoral researcher to collaborate with on research projects involving Iranian linguistics.

“The Elahé Omidyar Mir-Djalali Chair in Iranian Linguistics is an invaluable gift that will allow us to continue the work that our research group started in 2015,” Karimi said. “We will be able to pursue the descriptive and theoretical analysis of significant aspects of languages ​​that have been, for the most part, spared by linguists around the world. I cannot be more grateful to be the recipient of this chair.

Recruit and train the best students

The new endowment will be housed in the interdisciplinary Roshan Graduate Program in Persian and Iranian Studies, or Roshan GIDP, at the Graduate College. The Roshan GIDP offers graduate degrees focusing on modern or classical Persian literature and culture as well as the history, religion, social organization, and politics of Iran and other Persian-speaking societies . The program benefits from the long tradition of Persian and Iranian studies at the School of Middle Eastern and North African Studies.

“A university education in this field is important because the Persian world is one of the oldest civilizations in the world with a rich history of arts, literature, philosophy and science. And today, that the current rulers in Iran whether or not they open the country to the free world, this country remains an important player in the region, with global ramifications,” said Kamran Talattof, holder of the Elahé Omidyar Mir-Djalali Chair of Persian and Iranian Studies, professor at the School of Middle Eastern and North African Studies and Founding President of the Roshan GIDP.

Established in 2003, the Roshan Institute of Cultural Heritage Postgraduate Scholarship Endowment in Persian and Iranian Studies will be combined with the new Scholarship and Renown Endowment.

The endowment will fund up to two graduate scholarships per year in a competitive multi-year funding program for doctoral students. To be eligible, students must be enrolled in the Roshan GIDP Ph.D. program or in the doctorate in linguistics. program studying Iranian linguistics.

“The Elahé Omidyar Mir Djalali Graduate Scholarships provide a unique opportunity to recruit and retain top students and future leaders in this discipline,” said Andrew Carnie, Vice Provost for Higher Education, Dean of the Graduate College. and professor in the Department of Linguistics. “Investments from the Roshan Institute of Cultural Heritage have enabled the University of Arizona to become one of the premier Ph.D.s in Persian/Iranian Studies. program in the country and a place where graduate students interested in Iranian cultures, languages ​​and linguistics flock.

A story of giving

The Roshan Cultural Heritage Institute supports educational and cultural activities that promote the understanding, transmission and teaching of Persian language and culture. Founded in 2000, the institute has awarded millions of dollars in grants to establish or strengthen academic programs in Persian at some of the world’s most prestigious universities.

This $2.5 million grant is the Roshan Cultural Heritage Institute’s fourth major grant to the University of Arizona. In 2003, the institute established a scholarship fund endowed with $300,000 to the School of Middle Eastern and North African Studies. A $2 million grant in 2016 established the interdisciplinary Roshan Graduate Program in Persian and Iranian Studies, which included funding for an endowed faculty chair, held by Talattof, and an endowed professorship, owned by Austin O’Malley. And in 2018, the institute awarded a million dollar grant to create the Persian-speaking professor Elahé Omidyar Mir-Djalali, held by Narges Nematollahi. The institute has also awarded several cash scholarships to fund graduate student theses research and support the Second North American Conference on Iranian Linguistics.

2022-07-14
Previous Post: ‘Alone’ spinoff to air in August on History Channel
Next Post: BD Chattopadhyaya’s deep knowledge and rigor have made him a mainstay in the Indian history community