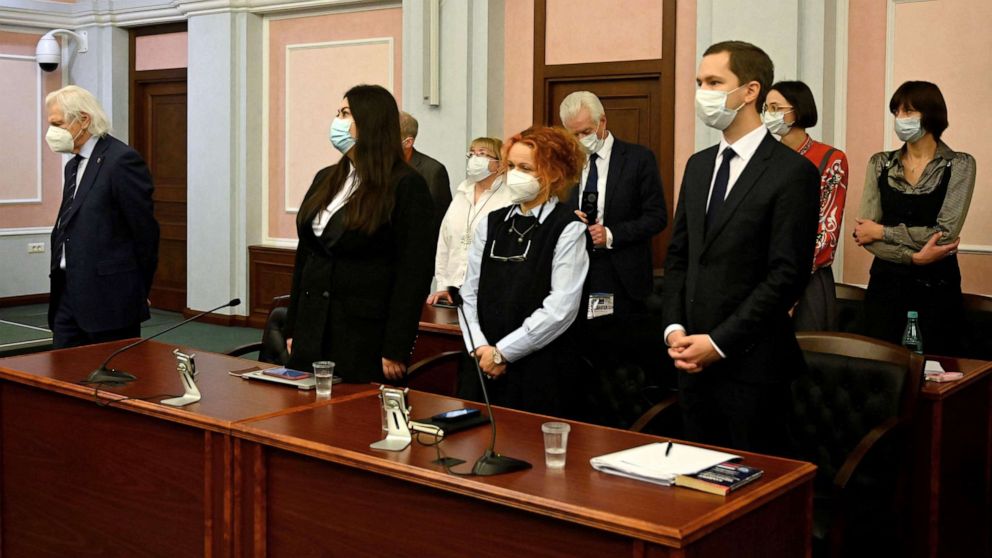 MOSCOW – In what has been described as a watershed moment in President Vladimir Putin’s crackdown on dissent, Russia’s Supreme Court on Tuesday ordered the closure of Memorial International, the country’s oldest human rights organization and the leading chronicler of mass crimes committed under the Soviet Union.

Memorial was founded in 1987 by prominent Soviet dissidents, including Nobel Prize-winning scientist Andrey Sakharov. As one of the first human rights organizations in Russia, it created an archive of mass executions and imprisonments in Soviet gulag camps under Joseph Stalin.

The organization’s efforts to record Soviet oppression and commemorate its victims were seen as a key symbol of Russia’s evolution towards democracy, and the country’s first democratically elected president, Boris Yeltsin, was a member. In today’s Russia, the group had also become a key advocate for those facing political persecution.

At a hearing in Moscow on Tuesday, Supreme Court Judge Alla Nazarova upheld prosecutors’ request to shut down Memorial for allegedly violating Russia’s “foreign agents” law, which has been used to target media and human rights organizations critical of the authorities.

Tuesday’s move was condemned in Russia and around the world as politically motivated and part of a larger campaign targeting human rights groups under Putin. But the movement against Memorial is seen to have unique significance, representing a turning point in the Putin government’s efforts to rehabilitate the USSR and silence the discussion on the darkest chapters in its history.

The US Embassy in Moscow condemned the move, with Ambassador John Sullivan calling it “a blatant and tragic attempt to suppress free speech and erase history.”

The decision to close Memorial comes amid an unprecedented crackdown on Putin’s dissent over the past two years that has seen many prominent opposition activists jailed or forced abroad. The independent media have also been crushed.

“This is a scandalous attack on the jugular of Russian civil society,” wrote Rachel Denber, Human Rights Watch deputy director for Europe and Central Asia, of Memorial’s closure. “Even when authorities have banned key opposition movements, jailed opposition figures, pushed independent media to the sidelines… today’s decision heralds a new era of repression.

Russian prosecutors have accused Memorial officials of violating the law by failing to mark certain posts with text identifying themselves as “foreign agents.”

In his closing arguments on Tuesday, prosecutor Alexei Zhafyarov told the court that Memorial created “a false image of the USSR as a terrorist state” and sought to rehabilitate “Nazi criminals”.

Memorial said in a statement that the alleged violations of the Foreign Agent Law were only a “formal” pretext to shut down the organization.

“But today the court has finally named not the formal reasons, but the real reason for the liquidation of Memorial International: the attorney general claims that we are misinterpreting Soviet history,” he said.

“The decision of the Supreme Court confirmed once again that the history of political terror, organized and directed by state power, remains for Russia not an academic question of interest only to scholars, but an urgent problem of the present, ”Memorial wrote.

Memorial lawyer Maria Eismont said she would appeal the ruling, and even take the case to the European Court of Human Rights if necessary. The group is committed to finding legal means to continue its work.

“Memorial is not just an organization. Memorial is the need of Russian citizens to know the truth about its tragic past, about the fate of millions of people. And no one can ‘liquidate’ this need,” he said. declared.

Putin does not deny that crimes were committed by the Soviet Union, but the authorities have recently tried to play them down and instead take a positive view of the USSR as a source of national pride. Over the past five years, authorities have imposed increased control over Russia’s Soviet history, seeking to glorify it and, in particular, its victory in World War II.

During the hearings against Memorial, a prosecutor told the court: “Why should we, the descendants of the victors, be ashamed and repent instead of being proud of our glorious past? Someone is probably paying Memorial for it.

In court Tuesday, Memorial Acting Director Elena Zhemkova noted that until recently the Russian government had appreciated the work of the group, including in expert commissions.

“Memorial had been doing the same job for 32 years,” wrote Denber of Human Rights Watch. “They haven’t changed. What has changed, of course, is the Russian government[ernment]. “

The outcry was joined by rights groups around the world. The Auschwitz Museum which commemorates the Nazi atrocities in the concentration camp tweeted a quote in Russian from its Dr Piotr MA Cywiński: “A power that is afraid of memory, can never reach democratic maturity.

Memorial has faced increasing pressure in recent years, with its offices sometimes attacked and some of its volunteers targeted in criminal cases. In 2020, Yury Dmitriyev, a Memorial member and historian who helped uncover Stalinist-era mass graves, was jailed for 13 years on charges of sexual abuse widely criticized as politically motivated. On Monday, just a day before the Memorial ruling, a court in Dmitriev’s home region of Karelia added two more years to his sentence.

Vasily Starostin, a volunteer Memorial researcher, told ABC on Tuesday that the order to close Memorial was “a blow.”

“Because Memorial has been a movement towards a more democratic and liberal society from the start,” he said. “I think symbolically speaking this whole thing is a huge setback for our company and the way it works.”

2021-12-28
Previous Post: Analysis of the news: the political redistribution of California consisted in defining a “community”
Next Post: DNA preserved in lice glue reveals secrets of South American mummies | Science